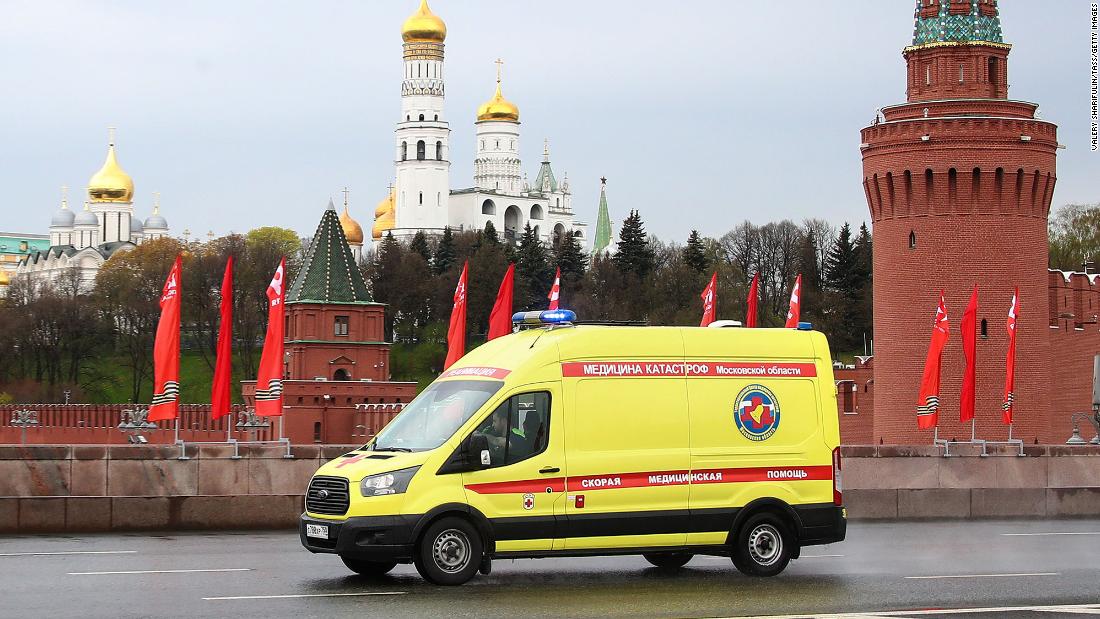 Two of the health workers died, and one is still being treated at the hospital.

The three incidents, which are being investigated by Russian law enforcement authorities, have prompted intense discussion in the Russian press and on social media.

Alexander Shulepov, an ambulance doctor in Voronezh, a city about 320 miles south of Moscow, is in serious condition after falling from a hospital window on Saturday. Local state television, quoting regional health officials, said he fell from a second-floor window of the Novousmanskaya hospital, where he worked and received treatment after testing positive for coronavirus.

Shulepov was hospitalized for the corona virus on April 22, the same day he and his colleague Alexander Kosyakin posted an online video saying that Shulepov had been forced to continue working after testing positive for the coronavirus.

Kosyakin earlier also criticized hospital administration for lack of protective equipment on her social media and was interrogated by police for allegedly spreading false news.

Kosyakin confirmed these details to CNN in an interview.

“[Shulepov] is an intensive care unit, as far as I know in serious condition, the last time I talked to him was on April 30, we checked with each other, “Kosyakin told CNN.” He felt fine, he was getting ready to get out of the hospital … and suddenly this happened, it was unclear why and for what, so many questions that even I did not have the answer. “

Police have not yet responded to CNN’s request for comment.

The Novousmanskaya hospital said in a statement that Shulepov had been dismissed as soon as he told the hospital administration about his positive diagnosis and offered to be treated in a hospital on an infectious disease ward.

Three days later, Shulepov retracted his previous statement, saying that in his video with Kosyakin he was “overwhelmed with emotions.” The second video recorded by Shulepov shows Igor Potanin, chief doctor of Novousmanskaya hospital, who said his medical staff had sufficient protective equipment.

“I talked about this to department employees: I would not let anyone go to outpatients or inpatients if we did not have enough protection, I told them that I would go there myself, but I would not send anyone, “Potanin said.

Shulepov is the third health worker in Russia to fall from a window in the past two weeks.

On May 1, Elena Nepomnyashchaya, acting chief doctor of a hospital in the Siberian city of Krasnoyarsk, died after spending a week in intensive care, the regional ministry of Health said in a statement.

The local TV station TVK Krasnoyarsk reported at the time that Nepomnyashchaya allegedly fell from a window during a meeting with regional health officials, where they discussed turning clinics into coronavirus facilities.

Nepomnyashchaya was reportedly opposed to the change due to lack of protective equipment in hospitals. The regional health department The Health Department denied the allegations in a statement, adding that the hospital was in a “reserve” for coronavirus patients and its staff had been trained and equipped. The hospital did not respond to CNN’s request for comment.

On April 24, Natalya Lebedeva, head of emergency medical services in Star City, the main training base for Russian cosmonauts, died in hospital after falling.

The hospital inside the Federal Biomedical Agency, which said it treated him on suspicion of being a corona virus, released a statement that “a tragic accident” occurred, without elaborating. The hospital did not respond to CNN’s request for comment.

In the statement, the hospital said, “He is a true professional in his field, saving human lives every day!”