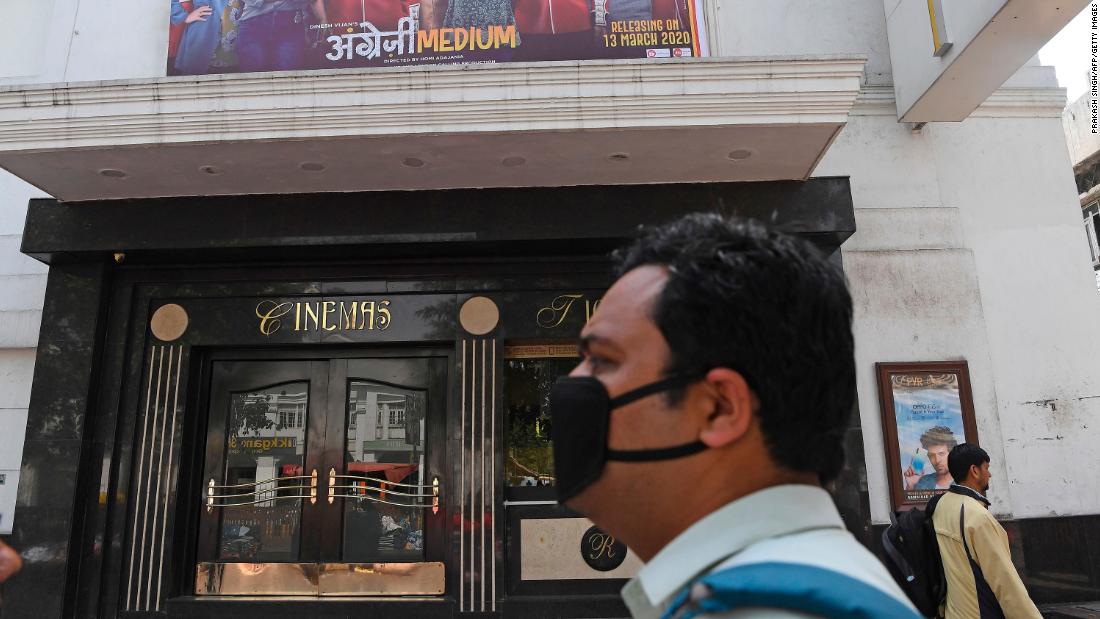 In contrast, the coronavirus pandemic has stopped the world’s most productive film industry. Cinemas have closed their doors, production companies are canceling filming, and film studios have delayed release – including the debut of at least two major films that are expected to bring the season. The highly anticipated action film “Sooryavanshi” and the “83” cricket biography, the last one telling the story of India’s 1983 World Cup victory, both of which were pushed back for “health and safety” reasons. The producers did not say when they would be released.

“The films are very big,” said Shubhra Gupta, film critic for the Indian Express newspaper. “There is a lot of anticipation from the audience. This is a big loss.”

The pandemic is likely to cost the Indian film industry more than $ 330 million in losing box offices and cancel filmmaking, according to Komal Nahta, a film trade analyst and television host “ETC Bollywood Business.”

More than 1,800 films were produced in India in 2018, according to Statista, research and data web site. That was more than any other country’s film industry that year.

While Bollywood films in Hindi dominate the industry, there are other important players, including the regional hub of Tollywood (Telugu), along with films made in Marathi, Bhojpuri and Bengali.

All told, box office income in India is estimated to have reached $ 1.4 billion in 2019, an increase of almost 12% from the previous year, according to an annual report published by consulting company Ormax Media. Most of it comes from Indian films; Hollywood represents only 15% of that amount.

Film producers in India also don’t just want to please their Indian fans. Some of the biggest names in Bollywood, including Shah Rukh Khan, Akshay Kumar and Deepika Padukone, help the industry gain revenue from viewers around the world.

Last year, for example, the action thriller “War” took $ 13.7 million abroad, about a quarter of its total box office.

“With India, the problem is doubled because all theaters throughout the world have to open,” said Nahta, trade analyst. “Foreign income for Hindi major films forms a large component of total income.”

But the coronavirus pandemic has completely dropped plans to release the film in the near future. At the end of March, Prime Minister Narendra Modi announced an unprecedented three-week closure for 1.3 billion people in India that required everything to be closed except for essential services, including health services and grocery stores.

Even before the lockout came into effect, film companies in India announced that they would suspend filming films, TV and web series. Filmmaking remained on hold during national lockdown, which now ends on May 17 after several extensions.

“We will see a cascading effect on the film,” said Gupta, film critic. “This will affect the entire film list for this year.”

Even if the cinema reopens, they will continue to lose money if they cannot accommodate many people, according to Nahta. He pointed out that Chinese cinemas had sold movie tickets to the prevailing social distance rules.

“If you sell tickets based on social distance, you reduce your capacity because for every seat you sell, you stay empty,” he added. “If your capacity is 50%, it won’t support a big film budget.”

With film production on hold, many people in the industry are left without much work.

READ  Public Housing Access for the Elderly | "Denial of rights" and "unnecessary coups," the ombudsman said

Bollywood makeup artist Arti Nayar – who has worked for more than a decade with stars like Sonam Kapoor-Ahuja, Katrina Kaif and Alia Bhatt – said the projects and events that she was supposed to do this spring had been pushed back indefinitely due to viruses. . .

“Light boys, people who take care of your food, we all basically get a daily income,” Nayar said. “So when a photo shoot is canceled, it will hit us financially because you plan your life according to what you get.”

The Producers Guild of India (GUILD) has prepared grants for those who are paid per day such as hairdressers, makeup artists and assistants working in the technical department.

Siddharth Roy Kapur, president of GUILD, urged members of the film fraternity to contribute in an effort to “minimize disruptions in the lives of our valued colleagues and colleagues in these difficult times.”

GUILD also partners with the Indian Film and Television Producers Board and the West India Cine Employees Federation to provide assistance to those most affected.

“The truth is we will not work without limits,” Nayar said. “You can’t practice social distance, everyone works very close.”

When it comes to replacing lost budgets, Nahta estimates that big names – both in front of and behind the camera – might have to take salary deductions. He noted that costs for top stars are the highest part of the budget, and are likely to be targeted.

Meanwhile, Gupta said he was confident the pandemic would encourage more conversations between production houses about the release date, so that the two big films were not released at the same time and took advantage of each other. He added that he thought the industry also tended to see other changes.

– Swati Gupta contributed to this report.