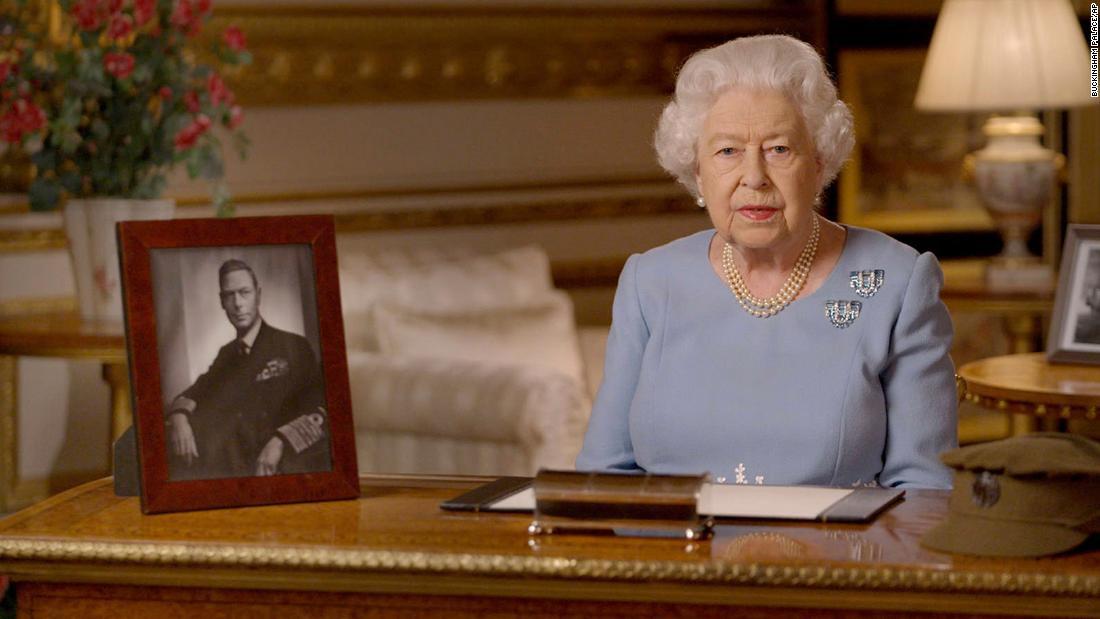 Speaking on the 75th anniversary VE Day, The Queen recalls her own experience of the end of fighting on the continent and praised the “strength and courage” of the British and Allied forces that it brought German surrender on May 8, 1945.

“Never give up, never despair – that is VE Day’s message,” the king said. “I vividly remember the joyous scenes that my sister and I watched with our parents and Winston Churchill from the balcony of Buckingham Palace.”

Acknowledging his impact on modern British life from the coronavirus pandemic, which has forced public warnings this year to be canceled, he also drew parallels between the British war generation and his modern compatriots.

“Today it might seem difficult that we cannot mark this special birthday as we wish. Instead we remember from our homes and households,” he said at the end of his speech. “But our paths are not empty; they are filled with the love and attention we have for each other.

“When I look at our country today, and see what we want to do to protect and support one another, I say proudly that we are still a nation that brave soldiers, sailors and pilots will know and admire,” added the Queen. .

The king’s message was broadcast 75 years after his father, King George VI, gave a radio address to the country where he praised “great liberation” and announced that “Germany, the enemy that pushed all of Europe into war, had finally been overcome.”

On May 8, 1945, Prime Minister Winston Churchill also announced to the British that Germany had “signed an unconditional surrender.” Churchill ended his speech by saying: “Forward Britannia, longevity is the cause of freedom, God save the King.” On this day – VE Day – Buckingham Palace became the focal point of the celebration.

“At first, the prospects looked bleak, the ends were far away, the results were uncertain,” the queen said on Friday, thanking Britain, the Commonwealth and other Allied countries for their efforts. “But we remain convinced that the cause is correct – and this belief, as my father noted in his broadcast, led us.”

The speech marks the second time the 94-year-old king has made a speech in the country since the coronavirus outbreak began – usually a rare occurrence kept only for his annual Christmas message.

Appears when Prime Minister Boris Johnson is preparing to announce the country’s plans for a while emerged from its lockout in a separate television speech on Sunday. These restrictions, meaner than the restrictions on British life seen since World War II, have left VE Day Celebrations throughout the world were significantly muted and forcing planned public meetings in London and other cities to be canceled.

Ratu recalled a much happier scene 75 years ago. “The joy among the crowds gathered outside and throughout the country is very deep,” he said.

Elizabeth, then a 19-year-old king in waiting, celebrated with her family and Churchill at Buckingham Palace before leaving with her sister, Princess Margaret, to join in celebrating the crowds in London in 1945.

“I remember a line of strangers who connected weapons and walked in Whitehall, we all just wiped out a wave of happiness and relief,” he recalls one day in a 1985 clip that was redistributed by the royal family earlier Friday. “After crossing Green Park, we stood outside and shouted, ‘We want the King!’ and we managed to see my parents on the balcony … I thought it was one of the most memorable nights of my life. “

Earlier on Friday, many countries observed a two-minute silence, and Johnson tweeted that the nation’s thanks to those who fought would be “eternal”. The Red Arrows display team did a flyover in London.

Around 70 million people fought in the armed forces of the Allied and Axis countries during World War II, with an estimated total death ranging from 40 to 85 million.

VE Day marked the moment when Germany officially surrendered, ending the battle in European theater. Conflict continued in Asia and the Pacific until Japan surrendered on August 15.

“The wartime generation knows that the best way to honor those who do not return from war is to ensure that it does not happen again,” the queen said in her Friday address. “The greatest appreciation for their sacrifice is that countries that were once enemies are now friends, working side by side for peace, health and prosperity for all of us.”

Hilary McGann from CNN contributed to this report.