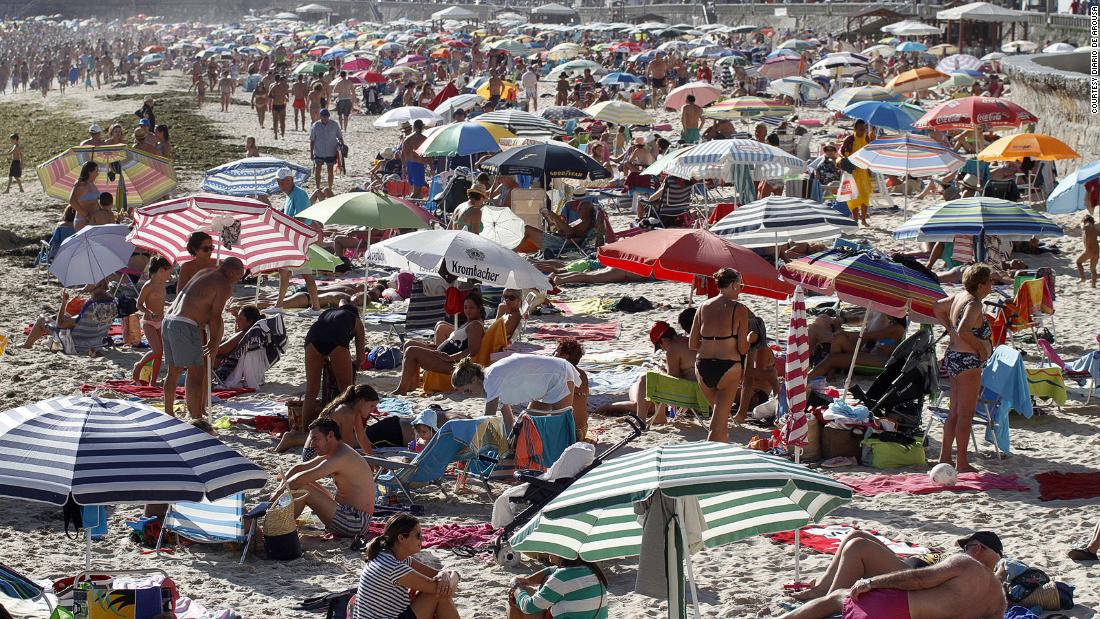 (CNN) – You make a reservation at a restaurant, of course. But what about booking in advance just to get a place in the sand on the beach?

That’s exactly what some beach visitors have to do in Spain this summer, thanks to the coronavirus crisis.

Canet d’en Berenguer, a Mediterranean city located north of Valencia, will only allow 5,000 daily sunbathing on the local coast, about half the usual amount, to maintain social distance.

These spaces need to be booked in advance via the mobile application.

“This summer will be very different,” Pere Joan Antoni Chordá, the mayor of the city, told CNN. “There will be more space between your neighbors. Like a ‘business class’ beach.”

Canet will use a lattice pattern to divide its broad, flat beach into several square sections, each separated by two meters (six feet).

These sections must be illustrated by placing a series of nets on the sand that look like large soccer goalposts to accommodate large groups of sunbathing.

Beach visitors will be allowed to book a sun session either in the morning or evening, but not all day.

According to the mayor, sunbathers can order available areas, such as choosing a seat online at the cinema, and arrival times will stagger to avoid the crowds.

Sunbathers on the main beach in the Spanish city of Sanxenxo will be allocated a place based on “first come, first served”.

The access point to the beach must also be reduced.

After they arrive and confirm their reservation with the staff, beach visitors will be directed to the allocated section.

“I won’t be able to control the flow of people [without the new measures]. They will be together, polluting each other, “he explained.

Canet d’en Berenguer is not the only city in Spain that has chosen to limit beach access this summer.

This rendering shows how the authorities plan to tie zones to keep people at a safe distance from each other.

While in Galicia, in the Atlantic Ocean, Sanxenxo will only allow the entry of sunbathers on a “first come, first served” basis.

However, Mayor Telmo Martin said he was not worried about the crowd forming at the beach access point.

“Tourism is 80% of our economy,” Martin told CNN. “We must find a solution so that our people feel safe, from a health perspective. I ask for the responsibility of all.”

Sanxenxo, located only an hour’s drive north of the Portuguese border, aims to allow a maximum of 75% of normal beach visitors.

The city, one of the main tourist destinations of northern Spain, also chose a grid pattern for sunbathers with at least 1.5 meters (five feet) in between, on its main beach.

In addition, wooden poles with ropes attached to form small squares for only a few sunbeds, or larger ones for larger groups, will be added, according to Martin.

City workers must control access to the beach, which accompanies baths to each section.

However, beach visitors here can no longer occupy the place all day long just by leaving a towel on it.

If they go to lunch, they lose place for others, said Martin.

This rendering shows how the authority will spread the net in Canet d’en Berenguer.

Both cities plan to clean the beach more often than in the previous summer, with Canet lifting thick nets of sand every morning to let the cleaning machine in.

At Sanxenxo, the cleaning machine will only pass through a line of wooden poles, like a tractor through a vineyard. Public bathrooms and shower areas will also be disinfected regularly.

While the two cities hope to open their beaches in June, each confirmed date will ultimately depend on a reduction from the Spanish emergency, which has been in effect since March 14.

The Spanish government has only just begun to slowly lift restrictions on tight house confinement, but any further changes depend on low infection rates in certain areas which according to officials must have hospitals equipped and ready to handle the possibility of a second wave of coronavirus.

“This is new to us all,” said Martin, a conservative member of the Popular Party, who has been mayor of Sanxenxo for eight years in two periods.

“People have told me that they want more space on the beach,” said Canet, Antoni Chordá, a member of the Socialist Party who was elected mayor eight months ago.

Both cities have smaller permanent populations that quadruple in the summer, when part-time residents flock to their vacation homes, and tourists who pass or stay in hotels in the city hit the coast.

Reservation or not, summer in these two cities will be a test of whether beach visitors can live in designated areas, and most remain separate from the others, the two mayors said.