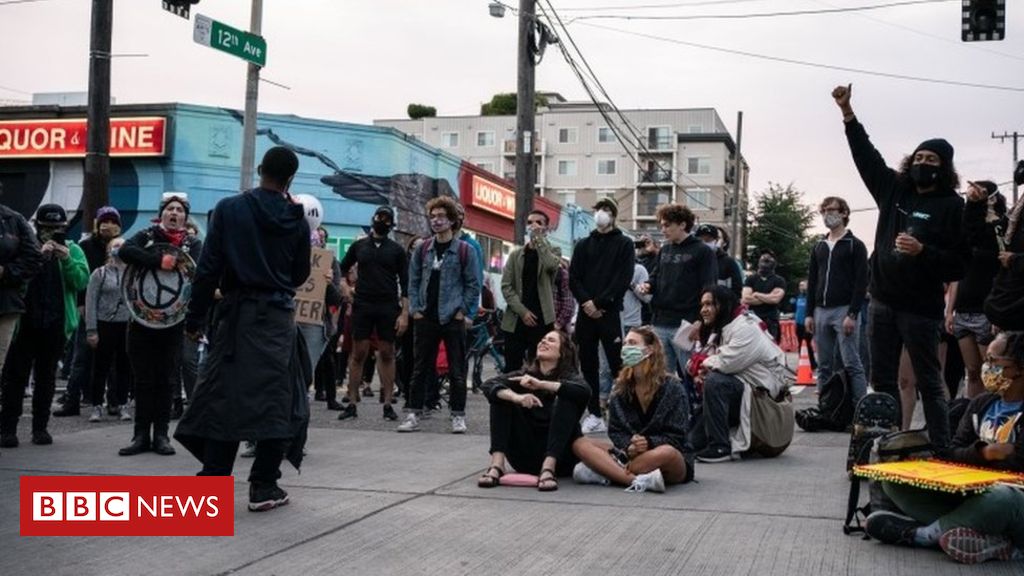 US President Donald Trump has threatened to “take back” a police-free district where protesters have been given free rein in Seattle.

Police abandoned a precinct in the city on Monday after days of violent confrontation with demonstrators.

Mr Trump said the area had been overtaken by “Domestic Terrorists”, but Washington state leaders told him not to meddle in their affairs.

Since police withdrew, demonstrations in the area have been largely peaceful.

It has been called Chaz, an abbreviation of Capitol Hill Autonomous Zone. Hundreds of people have been gathering there to demonstrate, hear speeches and attend events.

The protests in Seattle, Washington began in response to last month’s death in police custody of an unarmed black man, George Floyd, in Minneapolis, Minnesota.

President Trump, who has pushed states to take firm action against protesters, has meanwhile outlined proposals for reforming police, including greater funding for training and national guidelines on the use of force.

However, he dismissed calls for defunding the police as an “extreme agenda”. Such a measure involves budgets being allocated directly to communities rather than law enforcement.

How did the Chaz come about?

The area around East Precinct in Seattle became a battleground between protesters and police in the past two weeks, leading the governor to send in the National Guard and for the mayor to impose a curfew.

During the violence, demonstrators threw petrol bombs and other missiles at police, cars were torched and looting broke out, according to local media.

At the weekend, Seattle police used tear gas and flash bangs to disperse protesters. Members of the city council rebuked the police department, accusing them of heavy-handed tactics.

Then on Monday, the mayor ordered barricades removed near the precinct and the police building was boarded up.

Since then protesters have taken over a zone spanning about six blocks of Capitol Hill, a hub of the city’s trendy arts scene that has been gentrified in recent years as tech workers drive up property prices.

While the protesters say they are leaderless, armed volunteers have been spotted at checkpoints asking for the ID of people entering.

What did Trump say about Chaz?

In a series of tweets, the Republican president lashed out at liberal Democratic leaders in the north-western US state of Washington and its most populous city of Seattle.

“Take back your city NOW,” Mr Trump wrote on Thursday. “If you don’t do it, I will.”

In another tweet, he said “Domestic Terrorists have taken over Seattle”, saying Washington Governor Jay Inslee was “looking ‘the fool'”.

Mr Inlsee tweeted back: “A man who is totally incapable of governing should stay out of Washington state’s business.”

Seattle Mayor Jenny Durkan defended the right to protest and told President Trump: “Make us all safe. Go back to your bunker.”

“The threat to invade Seattle, to divide and incite violence in our city, is not only unwelcome, it would be illegal,” she added.

How do police see it?

Police say they want to reopen the precinct and it is unclear how long the autonomous zone will remain.

At a news conference on Wednesday, Assistant Chief Deanna Nollette said the police department had been abandoned because of threats that it would be vandalised or burned. She said the protesters’ barricades were intimidating some residents.

Police Chief Carmen Best posted a video message to officers in which she said the police withdrawal “seems like an insult to you and our community”.

On Thursday afternoon the police chief said claims by Asst Chief Nollette that citizens and businesses were being extorted in the zone were not true and had been based on anecdotal evidence from news and social media.

She said this means police are not able to respond to reports of assaults, rapes and robberies.

George Floyd dies after being arrested by police outside a shop in Minneapolis&comma; Minnesota. Footage shows a white officer&comma; Derek Chauvin&comma; kneeling on Mr Floyd’s neck for several minutes while he is pinned to the floor. Mr Floyd is heard repeatedly saying “I can’t breathe”. He is pronounced dead later in hospital.

Four officers involved in the arrest of George Floyd are fired. Protests begin as the video of the arrest is shared widely on social media. Hundreds of demonstrators take to the streets of Minneapolis and vandalise police cars and the police station with graffiti.

Protests spread to other cities including Memphis and Los Angeles. In some places&comma; like Portland&comma; Oregon&comma; protesters lie in the road&comma; chanting “I can’t breathe”. Demonstrators again gather around the police station in Minneapolis where the officers involved in George Floyd’s arrest were based and set fire to it. The building is evacuated and police retreat.

President Trump blames the violence on a lack of leadership in Minneapolis and threatens to send in the National Guard in a tweet.  He follows it up in a second tweet with a warning “when the looting starts&comma; the shooting starts”. The second tweet is hidden by Twitter for “glorifying violence”.

A CNN reporter&comma; Omar Jimenez&comma; is arrested while covering the Minneapolis protest. Mr Jimenez was reporting live when police officers handcuffed him. A few minutes later several of his colleagues are also arrested. They are all later released once they are confirmed to be members of the media.

Violence spreads across the US on the sixth night of protests. A total of at least five people are reported killed in protests from Indianapolis to Chicago. More than 75 cities have seen protests. At least 4&comma;400 people have been arrested.  Curfews are imposed across the US to try to stem the unrest.

President Trump threatens to send in the military to quell growing civil unrest. He says if cities and states fail to control the protests and “defend their residents” he will deploy the army and “quickly solve the problem for them”. Mr Trump poses in front of a damaged church shortly after police used tear gas to disperse peaceful protesters nearby.

Tens of thousands of protesters again take to the streets. One of the biggest protests is in George Floyd’s hometown of Houston&comma; Texas. Many defy curfews in several cities&comma; but the demonstrations are largely peaceful.

A memorial service for George Floyd is held in Minneapolis.  Those gathered in tribute stand in silence for eight minutes&comma; 46 seconds&comma; the amount of time Mr Floyd is alleged to have been on the ground under arrest. Hundreds attended the service&comma; which heard a eulogy from civil rights activist Rev Al Sharpton.

As the US saw another weekend of protests&comma; with tens of thousands marching in Washington DC&comma; anti-racism demonstrations were held around the world.

In Australia&comma; there were major protests in Sydney&comma; Melbourne and Brisbane that focused on the treatment of indigenous Australians. There were also demonstrations in France&comma; Germany&comma; Spain and the UK. In Bristol&comma; protesters tore down the statue of a 17th century slave trader and threw it into the harbour.

A funeral service for George Floyd is held in Houston&comma; Mr Floyd’s home town. Just over two weeks after his death in Minneapolis and worldwide anti-racism protests&comma; about 500 guests invited by the Floyd family are in attendance at the Fountain of Praise Church.  Many more gather outside to show their support.