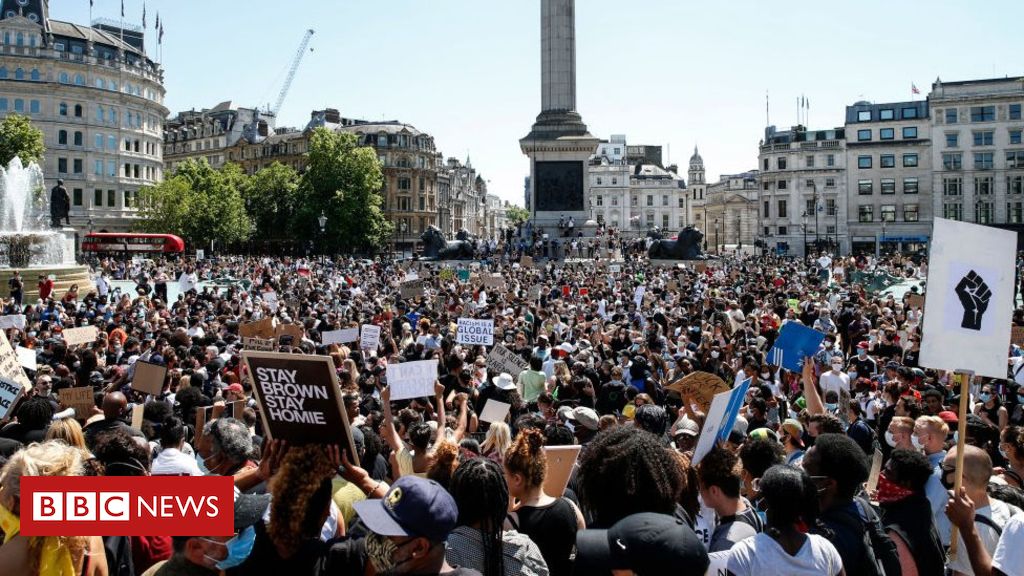 A shocking death caught on video in the US sparked protests all over the UK and a national debate over Britain’s history.

But what are some of the issues in the UK which prompted so many to react so strongly to the killing of George Floyd 4,000 miles away?

It was the “absolute brutality” of George Floyd’s death and the fact that it was caught on video which mobilised people to come out and protest in the UK, says Remi Joseph-Salisbury, an academic at the University of Manchester and an organiser with the Racial Justice Network.

And he says incidents are increasingly being recorded in the UK, such as the footage of Desmond Mombeyarara being Tasered in front of his five-year-old son in Manchester last month. Police are investigating the incident.

“People are starting to connect the dots with what’s going on in the UK,” says Dr Joseph-Salisbury, citing the video of rapper Wretch 32’s father being Tasered at home and the death of Simeon Francis in a Devon police cell. Police are investigating the case of Mr Francis. In the case of Wretch 32’s father, police say a review had found no indication of misconduct.

Black people were also more than nine times as likely to be stopped and searched.

Dr Joseph-Salisbury says it has sometimes been more difficult to mobilise UK protesters in the past. “Britain likes to think of itself as being much less racist than the US,’ he says.

But, he says, abuses caught on video were a powerful motivating factor. “There’s something more grassroots and more urgent to what’s happening this time.”

Since 1990, there have been 1,743 people in England and Wales who have died following contact with the police, according to the charity Inquest.

And for Ken Fero, a spokesman for the United Friends and Families Campaign, which represents those whose loved ones have died after contact with the police, there is increasing evidence that this history of deaths in custody is motivating protesters.

Names such as Sean Rigg and Leon Patterson have appeared on placards or been chanted by protesters.

“With the young people who are protesting at the moment, and it does seem to be young people, there is a stronger sense of history and consciousness than there has been in the past,” he says.

It has also been a feature of Black Lives Matter protests in the US to make the names of those who died due to police violence a focus of demonstrations and online activism, with the hashtag #saytheirnames.

Protesters have said both of these “deadly pandemics” – racism and coronavirus – must be tackled together, as data has shown black Britons in England and Wales have been nearly twice as likely to die with the disease as white people.

The government’s review into the impact of coronavirus on ethnic minority communities told a similar tale of social and economic inequalities with poverty, overcrowded housing, and being employed in lower-paid or key worker roles being put forward as factors for this disparity.

People from black and ethnic minority groups have also been hit harder financially during the crisis, as research has shown they are more likely to be working in shut-down sectors or precarious jobs.

Belly Mujinga, a railway ticket office clerk in London who died with coronavirus after reportedly being spat at, has become a symbol during the protests of these socio-economic divides. “Black lives do matter. Belly’s life mattered,” placards read.

More than 1.5 million people have since signed a petition calling for “justice” for the 47-year-old, who was born in the Democratic Republic of the Congo, after the British Transport Police closed her case due to insufficient evidence.

As ethnic minority groups continue to bear the brunt of the labour, health and socio-economic impact of this pandemic, many will be hoping protective measures will be brought in soon.

4. Education about Britain’s colonial past

Even before the UK had a Black Lives Matter movement, it had the Rhodes Must Fall campaign. Inspired by similar movements in South Africa, it sought to remove the statue of Oriel College’s imperialist benefactor Cecil Rhodes and to reform Oxford University’s curriculum to focus less on white Europeans.

On Sunday, that debate about the symbols of Britain’s colonial past moved from academia to the streets, when protesters pulled down the statue of slave trader Edward Colston in Bristol city centre and threw it into the harbour.

The action recalled similar forced removals by protesters of Confederate memorials in US states such as North Carolina and Georgia.

Kehinde Andrews, professor of black studies at Birmingham City University, suggests the movement’s success in increasing support from white people may have played a part in the removal of the Colston statue.

“If you look at who tore down the statue, it was predominantly white protesters. They can get away with things that we probably couldn’t,” he says.

“If you have a majority black protest tearing down a statue like that, I’m not sure what the response is – from the police, let alone the media.”

When Black Lives Matter started in the UK in 2016, Patrick Vernon says it was a youth-led movement that was not taken very seriously by older black people.

The movement, started in protest at police killings of black people in the US, came to Britain as a coalition of black activists opposing unjust policing and other forms of racism.

Over the next two years, Mr Vernon says, older people changed their minds.

First came the Grenfell Tower fire in 2017, which led to the deaths of 72 people, many of them black and Asian, amid claims of official neglect. Then the Windrush scandal emerged in 2018, with thousands of people from Commonwealth countries in the Caribbean and Africa wrongly told they were in Britain illegally.

Mr Vernon, a campaigner for the Windrush victims, said people lost their homes, their jobs and were deported, having a “traumatic effect”.

“It raises that vexed question, are we British? Are we really British? Are we valued? Is our contribution valued in this country? The whole Black Lives Matter thing crystallises that,” he says.

This succession of issues affecting black communities has made people more willing to speak out and demonstrate, Mr Vernon suggests.

“They are now activists because they are fighting for their rights to stay in this country or for their compensation,” he says.

“They want to take action because the current democratic process is not working for people.”