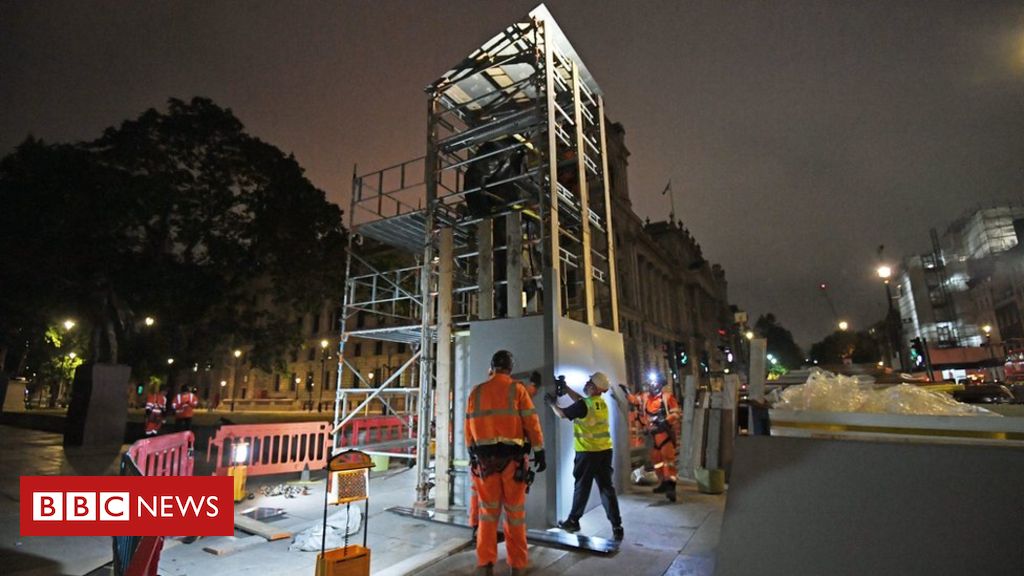 A statue of Winston Churchill and the Cenotaph in central London have been boarded up ahead of planned protests.

Monuments were targeted during last week’s anti-racism protests sparked by the death of George Floyd in Minneapolis.

The Mayor of London has called on protesters to “stay at home” this weekend to avoid further disorder.

Sadiq Khan said “key statues”, including one of Nelson Mandela, will be covered for protection today.

During protests last weekend a statue of Winston Churchill in Parliament Square was defaced, while in Bristol an effigy of slave trader Edward Colston was pulled down.

Video shared online also appeared to show a protester climb the Cenotaph, the memorial to Britain’s war dead on Whitehall, and attempt to set a union jack flag alight,

More protests are taking place over the weekend.

A Black Lives Matter protest planned for Saturday in Hyde Park has been brought forward to Friday, over fears it would be hijacked by counter-protests.

Far-right groups have called on supporters to travel to London to protect monuments from being damaged.

Mr Khan said: “I’m extremely concerned that further protests in central London not only risk spreading Covid-19, but could lead to disorder, vandalism and violence.

“Extreme far-right groups who advocate hatred and division are planning counter-protests, which means that the risk of disorder is high.

“Staying home and ignoring them is the best response this weekend.”

Violent protesters could be jailed within 24 hours under plans to fast-track arrests linked to protest.

The BBC understands that opening hours at magistrates courts are to be extended to process anybody caught vandalising, causing criminal damage or assaulting police officers.

Churchill is lauded for leading Britain to victory in World War Two.

He is described on the UK government website as “an inspirational statesman, writer, orator and leader”, and was voted the greatest ever Briton in a 2002 BBC poll.

But for some he remains a controversial figure, in part because of his views on race.

On Tuesday, a statue of slave owner Robert Milligan was removed from outside the Museum of London Docklands.

Guy’s and St Thomas’ hospitals in London have said they will remove two statues linked to slavery in response to anti-racism protests.

The NHS foundation trust which runs the hospitals said monuments of Thomas Guy and Sir Robert Clayton will be moved out of public view.