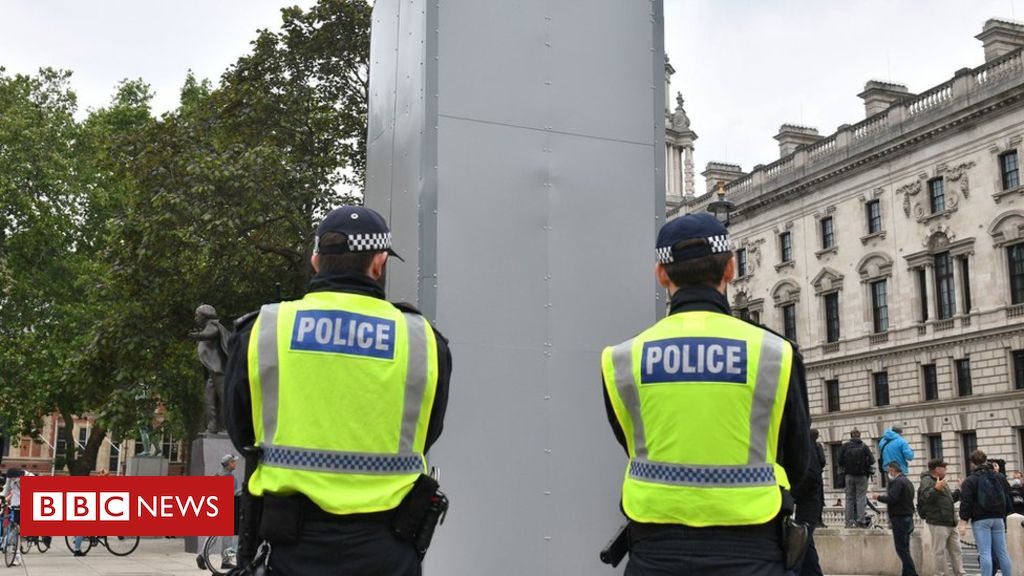 It is “absurd and shameful” that a statue of Winston Churchill has had to be boarded up because of fears it could be vandalised, the prime minister says.

Boris Johnson said the war-time leader had expressed opinions which were “unacceptable to us today” but remained a hero for saving the country from “fascist and racist tyranny”.

Protesters daubed “was a racist” on the monument last weekend.

Labour said the PM should “show leadership” by addressing the nation.

Shadow home secretary Nick Thomas-Symonds told the BBC he wanted to hear that Mr Johnson “understands the deep hurt and anger that black people in our country feel”.

In a series of tweets, Mr Johnson said monuments like Churchill’s were put up by previous generations as he urged people to “stay away” from demonstrations amid the coronavirus pandemic.

The statue in London’s Parliament Square was boxed up ahead of a Friday evening Black Lives Matter protest in Westminster.

A demonstration planned for Saturday was brought forward by a day because of fears there could be violent clashes with far-right groups.

Leaders of the march urged those in attendance to keep the demonstration “peaceful” and not to join any anti-racism rallies planned for the weekend.

Hundreds of campaigners surrounded Nelson’s Column in Trafalgar Square by 17:00 BST after walking from Hyde Park, as around two dozen police officers watched on.

Other monuments have been removed ahead of separate protests planned over the weekend, while the Cenotaph war memorial, in nearby Whitehall, has also been covered.

In Poole, Dorset, a statue of Scouts movement founder Robert Baden-Powell is to be cladded instead of removed.

Mayor of London Sadiq Khan said other “key statues”, including one of Nelson Mandela, would be protected.

It comes after the statue of slave trader Edward Colston was thrown into the river in Bristol during a Black Lives Matter protest on Sunday.

Demonstrations have been taking place across the world following the death in police custody of George Floyd in Minneapolis last month.

Mr Johnson said that, while he understood “legitimate feelings of outrage” at Mr Floyd’s death, the “only responsible course of action” was to “stay away from these protests”.

The prime minister said the demonstrations had been “hijacked by extremists intent on violence”.

Mr Johnson added that whatever people’s feelings about the cause they should not support a demonstration which “in all probability” would “end in deliberate and calculated violence”.

The Metropolitan Police said it was ready to tackle violence directed at officers or property following disorder at anti-racism protests last weekend.

Commander Bas Javid said both Black Lives Matter protestors and right-wing groups would be dealt with using the same tactics but urged all parties to stay at home and make their voices heard in other ways.

He added it was accepted “a very, very small minority” were intent on engaging in violence last weekend but the force “absolutely don’t condone… violence of any kind”.

While Churchill is credited with helping lead the Allies to victory in World War Two, some critics accuse him of racism because of comments he made about Indians.

The Grade-II listed bronze tribute to the former home secretary and prime minister was installed in 1973 at the north-east corner of Parliament Square, opposite the Carriage Gates entrance to the Palace of Westminster.

“It shows Churchill as a powerful, stocky, figure in a naval overcoat leaning informally on a stick and gazing, somewhat defiantly, towards the Houses of Parliament,” according to Historic England.

Why does Churchill divide opinion?

Winston Churchill, who lived between 30 November 1874 and 24 January 1965, is often named among Britain’s greatest-ever people but for some he remains an intensely controversial figure.

Despite his leading the country through the darkest hours of World War Two and being prime minister twice, critics point to his comments on race and some of his actions during both world wars.

Churchill told the Palestine Royal Commission that he did not admit wrong had been done to Native Americans or aboriginal Australians as “a stronger race, a higher-grade race, a more worldly wise race to put it that way, has come in and taken their place”.

His supporters argue that he was by no means the only person to hold these sorts of views during the period.

He also advocated the use of chemical weapons, “I am strongly in favour of using poisoned gas against uncivilised tribes,” he wrote in a memo.

Another criticism is for his part in the Bengal famine in India in 1943, during which at least three million people are believed to have died after Allied forces halted the movement of food in the region – including through British-run India – following the Japanese occupation of Burma.

On Tuesday, a statue of slave owner Robert Milligan was removed from outside the Museum of London Docklands.

A petition to remove a statue of Mahatma Gandhi in Leicester received nearly 5,000 signatures.

The National Trust confirmed a “degrading” statue of a black man has been removed from the grounds of Dunham Massey Hall in Greater Manchester.

And the NHS trust which runs Guy’s and St Thomas’ hospitals in London has said it will remove statues of Thomas Guy and Sir Robert Clayton – both linked to slavery – from public view.