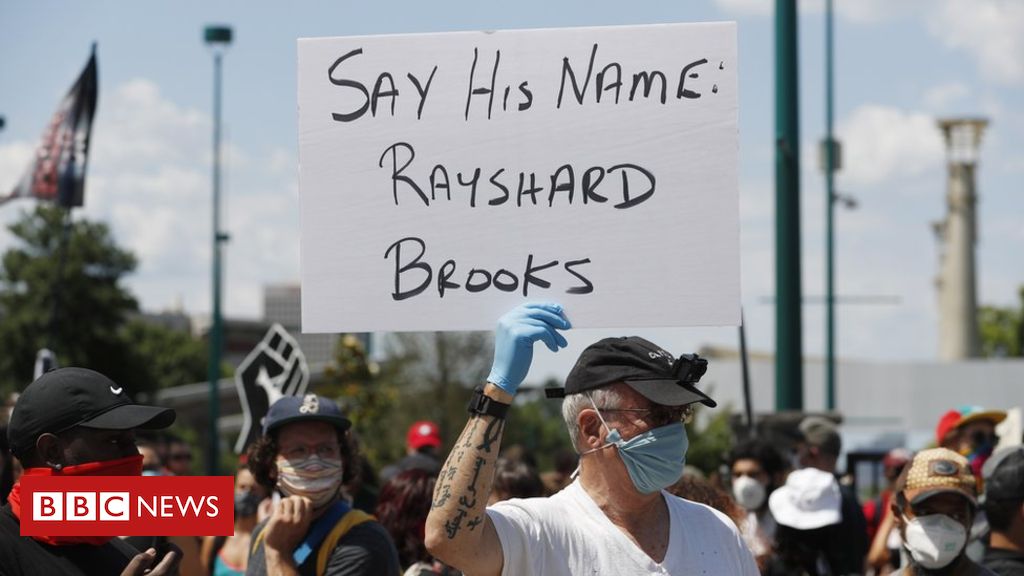 Atlanta’s Police Chief has resigned after the fatal shooting of an African-American who had fallen asleep in his car at a drive-through restaurant.

Rayshard Brooks, 27, was shot by a police officer during a struggle on Friday, authorities say.

Protesters in Atlanta took to the streets this weekend calling for action following Mr Brooks’ death.

On Saturday evening, demonstrators closed down a major highway, Interstate-75, in Atlanta.

Over the past three weeks, people across the US have already been protesting over the death of George Floyd, an unarmed black man in police custody.

Erika Shields had served as police chief since December 2016 and had worked in the Atlanta police department for more than 20 years. She will continue with the department in another role, Mayor Bottoms said.

“Because of her desire that Atlanta be a model of what meaningful reform should look like across this country Chief Shields has offered to immediately step aside as Police Chief so that the city may move forward with urgency and rebuilding the trust so desperately needed throughout our communities,” Mayor Bottoms said in a statement.

Mayor Bottoms has also called for the sacking of the officer involved in Brooks’ death.

What happened on Friday night?

The Georgia Bureau of Investigations (GBI) is probing the death of Brooks, 27, and is looking at video from a security camera inside the Wendy’s restaurant and also eyewitness footage.

It says police had been called to the restaurant because Mr Brooks had fallen asleep in his car, which was blocking the drive-through lane.

According to police, Mr Brooks resisted arrest after he failed a breathalyzer test.

A report from the GBI said footage captured from inside the Wendy’s restaurant shows officers chasing Brooks before he turns and points a Taser at an officer.

“The officer then fired his weapon, striking Brooks,” the report said.

In the eyewitness video, Brooks can be seen on the ground outside a Wendy’s restaurant, struggling with two police officers.

He grabs an officer’s Taser and breaks free from the officers, running away. The other officer then manages to use a Taser on Brooks and both officers then run out of the frame of the video.

Gun shots can then be heard and Brooks is seen on the ground.

He was taken to hospital but later died. One of the officers was treated for an injury from the incident.

The Fulton County District Attorney’s Office is conducting a separate investigation into the incident, it said in a statement.

This is the 48th officer-involved shooting the Georgia Bureau of Investigation has investigated this year, according to ABC News. Of those cases, 15 of those were fatal.

A number of protesters gathered outside the Wendy’s on Friday, according to the New York Times.

Protests then began again in the centre of Atlanta on Saturday. Images from the protest show demonstrators holding signs with Brooks’ name and Black Lives Matter signs.

People in Atlanta had already been protesting following the death of George Floyd. He died on 25 May after a Minneapolis police officer kneeled on his neck for over eight minutes. The officer has been sacked and charged with second-degree murder.

What has happened in other US cities?

Demonstrations have taken place across the US and across the world since Floyd’s death. Many in the US are calling for the police to be reformed.

In Minneapolis, where Mr Floyd died, the City Council passed a resolution on Friday to replace its police department with a community-led public safety system. Just days before it voted to disband the police department.

The council said it would begin a year-long process of engaging “with every willing community member in Minneapolis” to come up with a new public safety model.

In New York, Governor Andrew Cuomo has ordered police departments to undertake major reforms. He also said he would stop financing local authorities that failed to adopt reforms addressing excessive use of force and bias in their police departments by next April.

President Donald Trump said on Friday that the chokehold method for restraining some suspects should “generally speaking” be ended.

He was forced to postpone his first post-coronavirus lockdown election rally in Tulsa, Oklahoma so it does not fall on a holiday commemorating the end of US slavery.

Mr Trump moved the rally from 19 June to one day later, following criticism. The location was also controversial as Tulsa saw one of the worst massacres of black people in US history in 1921.