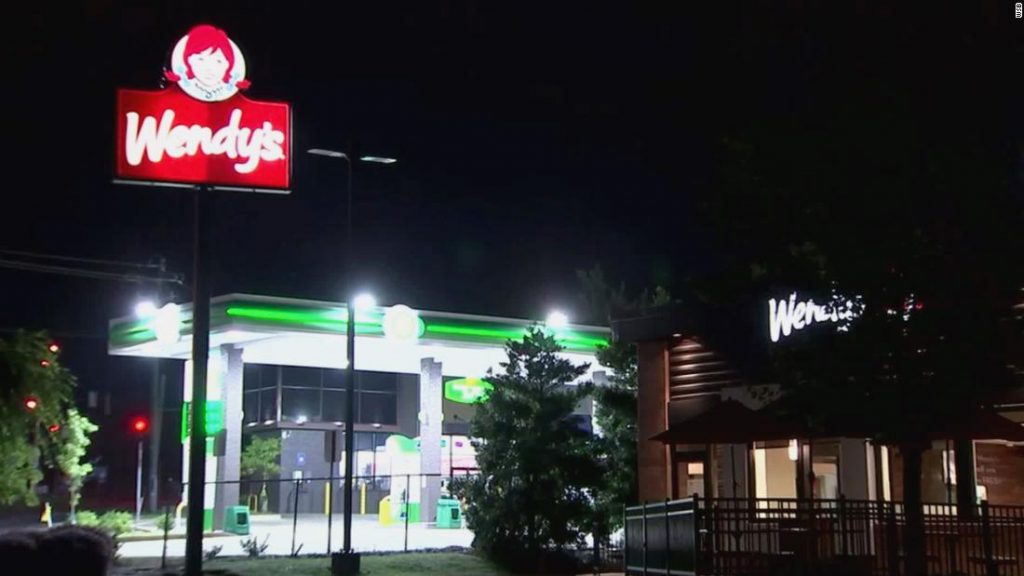 Atlanta Mayor Keisha Lance Bottoms called for the officer who shot the man to be fired.

The change at the top of the Atlanta Police Department comes as protesters take to the streets demanding action following death of 27-year-old Rayshard Brooks.

The incident began with a call to police at 10:33 p.m. about a man sleeping in a parked vehicle in the restaurant’s drive-thru lane, causing other customers to drive around it, the GBI said in a statement.

Police gave Brooks a field sobriety test, which he failed, the GBI said. He resisted arrest and struggled with officers, the GBI said.

GBI Director Vic Reynolds said Saturday that his department obtained surveillance video of the incident from Wendy’s and reviewed video that witnesses posted on social media.

CNN obtained two videos of the incident, including surveillance video from Wendy’s released by the GBI. The other video was provided by an eyewitness who CNN is not naming because they requested anonymity due to privacy concerns.

The video from the eyewitness begins in the middle of the struggle between Brooks and two police officers. In the video, an officer is heard telling Brooks to “stop fighting” and “hands off the taser.”

The eyewitness told CNN that by the time they arrived on the scene, Brooks’ car was parked in a parking spot.

“The fight started when they tried to make an arrest … after that he took a taser and took off,” the witness said.

As the scuffle broke up, the video shows Brooks beginning to run from the officers and he is seen holding what appears to be a stun gun in his right hand. It appears one of the officers fires their stun gun at Brooks three times as he runs away.

Witnesses told GBI investigators that Brooks had one of the officer’s stun guns.

Shortly after Brooks and one of the officers run by the car of the eyewitness taking the video, a second officer runs by, following Brooks.

Three shots are then heard out of frame.

The Wendy’s surveillance video doesn’t show the scuffle, but shows Brooks running away from where police cars are parked. In that video, Brooks appears to point the stun gun at the Atlanta officer.

“At that point the Atlanta officer reaches down and retrieves his weapon from his holster, discharges it, strikes Mr. Brooks there on the parking lot and he goes down,” Reynolds, the GBI director, said in a press conference on Saturday.

The eyewitness is heard saying in additional video obtained by CNN that Brooks was still breathing as he lay on the ground.

Brooks was taken to a hospital, where he died, the statement said. One officer was treated for an injury and released, the GBI said.

Bottoms criticized the officer who shot Brooks at a news conference Saturday, saying, “There is a clear distinction between what you can do and what you should do.”

“I do not believe this was a justified use of deadly force,” Bottoms said

Bottoms said it was Shields’ decision to step aside and she will remain with the city in an undetermined role.

In a statement, Shields said she’s stepping down “out of a deep and abiding love for this City and this department.”

“APD has my full support, and Mayor Bottoms has my support on the future direction of this department. I have faith in the Mayor, and it is time for the city to move forward and build trust between law enforcement and the communities they serve,” Shields said.

Rodney Bryant, the current head of the city’s corrections department, will serve as the city’s interim police chief.

Atlanta police were already under scrutiny

Brooks’ killing comes during global protests and discussion of racism and police use of force following the death of George Floyd last month in custody in Minneapolis. Atlanta has seen frequent protests, including some that turned violent.

The officers were filmed in downtown Atlanta breaking windows of a vehicle, yanking a woman out of the car and using a stun gun on a man. The two victims were later identified as college students at Spelman and Morehouse, both historically black universities in Atlanta. They were on their way home from picking up food when they got caught in traffic downtown caused by a protest of police violence against black citizens.

Two of the officers were fired by the mayor.

‘I thought Atlanta was higher than that’

At the Wendy’s in southeast Atlanta, Decatur Redd, who said he is a relative of Brooks, spoke with reporters and a crowd of people.

“I don’t know how to do this because I never knew that I was going to have to do this,” Redd said. “I’ve watched this on the internet, from the whole George Floyd situation to us coming together like we’re doing and this whole thing landed on my doorstep with my little cousin.

“We’ve been watching this happen for so many years, with young black boys around the country just dying in vain,” Redd said. “I just don’t want that to continue and keep happening like that.”

Former Democratic gubernatorial candidate Stacey Abrams called for restricting the use of deadly force in a post on Twitter.

“The killing of #RayshardBrooks in Atlanta last night demands we severely restrict the use of deadly force. Yes, investigations must be called for – but so too should accountability,” Abrams wrote. “Sleeping in a drive-thru must not end in death.”

The GBI is investigating at the request of the APD. Once completed, the case will be turned over to prosecutors for review.

“My office has already launched an intense, independent investigation of the incident,” Howard said. “Members of the Fulton County District Attorney’s Office were on scene shortly after the shooting, and we have been in investigative sessions ever since to identify all of the facts and circumstances surrounding this incident.”

CNN affiliate WSB reports this is the 48th police shooting the GBI has investigated in 2020.