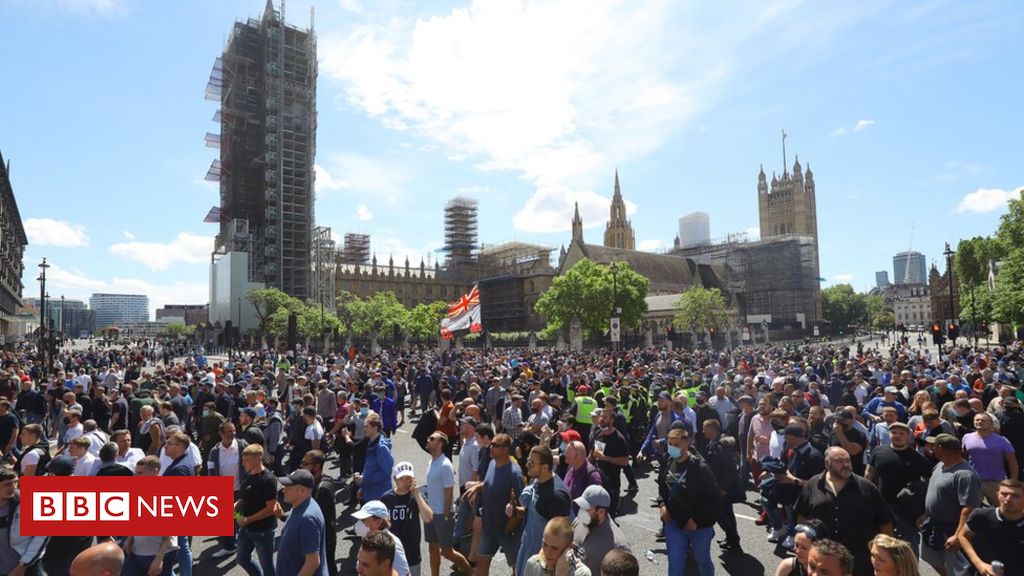 Restrictions have been placed by police on several groups ahead of planned protests in London this weekend.

The Metropolitan Police said several protests are scheduled in the capital on Saturday, including demonstrations by Black Lives Matter as well as left and right-wing groups.

Measures including requiring the events to end at 17:00 BST are in place following violent scenes last weekend.

Many are centred around the Cenotaph war memorial in Whitehall, while others are gathered around the boarded-up statue of Winston Churchill in Parliament Square.

Various groups from around the country, including right-wing activists and groups formed of football supporters, said they had come to London to protect symbols of British history.

Among the demonstrators, who are largely white men, was Paul Golding, leader of the far-right group Britain First, who said they had turned out to “guard our monuments”.

The statue of Churchill was boxed up to protect it from potential damage, after protesters daubed “was a racist” on it last weekend.

Protesters sang the national anthem and chanted “England”, amid a tense atmosphere and heavy police presence.

One large group moved to barricades outside Downing Street and a number of objects were thrown towards police.

Police urged protesters not to attend demonstrations in the capital due to the coronavirus pandemic.

“We are asking you not to come to London, and let your voices be heard in other ways,” Met Commander Bas Javid said.

The restrictions come in the wake of violence and serious disorder in Westminster at the end of protests last weekend.

While police said those demonstrations were on the whole peaceful, there were dozens of arrests and 27 police officers were injured.

The new conditions, set out on the Met’s website, apply to Black Lives Matter, and to left and right-wing groups that have notified the force of their intention to demonstrate on Saturday.

Restrictions mean Black Lives Matter demonstrators must stick to a specific route between Hyde Park and Trafalgar Square, where they will be permitted to assemble until 17:00.

Similar regulations applied to right-wing groups require them to assemble in Parliament Square and some parts of Whitehall, again until 17:00.

Denise Richards, who is involved in the Black Lives Matter movement in Derbyshire, said her chapter had decided not to protest in London on Saturday, and she believed other groups across the UK felt similarly.

She told BBC Radio 4’s Today programme that peaceful protesters feared they would be caught up in violent clashes with far-right demonstrators and this could “tarnish” the work of Black Lives Matter.

However, she said smaller protests would still be taking place in towns across the UK.

Nick Lowles, chief executive of campaign group Hope Not Hate, said there was a “very serious” threat of trouble from far-right activists and commended Black Lives Matter for standing down their plans to protest in London on Saturday.

“There are some people who are genuinely concerned about the protection of their statues and monuments but many people are coming for a fight and they are talking openly about it on their social media accounts,” he told the programme.

A Black Lives Matter demonstration took place in central London on Friday evening with leaders of the march urging those in attendance to keep the demonstration “peaceful” and not to join any anti-racism rallies planned for the weekend.

Mayor of London Sadiq Khan urged people to stay away from central London on Saturday, saying there was a risk of violence and disorder from extreme far-right groups planning to travel to the capital.

He told BBC Radio 4’s Today programme it was also “almost impossible to keep social distance” at large protests and there was evidence from around the world that people who had attended demonstrations had caught Covid-19.

Earlier, a statue of war-time leader Winston Churchill in Parliament Square was boarded up to protect it from potential damage.

The move was branded “absurd and shameful” by Prime Minister Boris Johnson.

Mr Johnson said the former prime minister had expressed opinions which were “unacceptable to us today” but remained a hero for saving the country from “fascist and racist tyranny”.

Protesters daubed “was a racist” on Churchill’s statue last weekend.

In a series of tweets, Mr Johnson urged people to “stay away” from demonstrations amid the coronavirus pandemic.

Other monuments have been removed ahead of separate protests planned over the weekend, while the Cenotaph war memorial, in Whitehall, has also been covered.

In Poole, Dorset, a statue of Scouts movement founder Robert Baden-Powell is to be cladded instead of removed.

Mr Khan said other “key statues”, including one of Nelson Mandela, would be protected, saying there was a risk statues could become a “flashpoint for violence”.

He told the BBC he thought the focus on statues was “a huge distraction”, adding that it was more important to tackle structural inequalities and racism in society.

It comes after the statue of slave trader Edward Colston was thrown into the harbour in Bristol during a Black Lives Matter protest on Sunday.

Demonstrations have been taking place across the world following the death in police custody of George Floyd in Minneapolis last month.

Mr Johnson said that, while he understood “legitimate feelings of outrage” at Mr Floyd’s death, the “only responsible course of action” was to “stay away from these protests”.

The prime minister said the demonstrations had been “hijacked by extremists intent on violence”.

He added that whatever people’s feelings about the cause they should not support a demonstration which “in all probability” would “end in deliberate and calculated violence”.

READ  A large pink-shaped coral reef was found in Tahiti