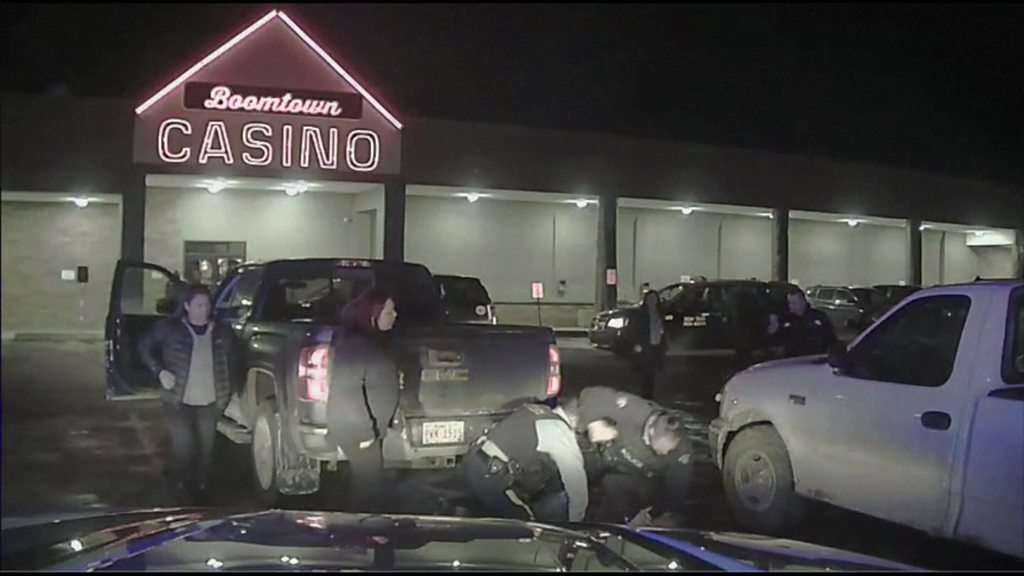 Video of an indigenous chief’s violent arrest has shocked Canada, turning a spotlight on systemic racism in the country’s police force.

The confrontation took place in Fort McMurray, Alberta, on 10 March.

Protests demanding police reform have spread across Canada recently after spilling over from the US.

Although RCMP Commissioner Brenda Lucki initially said she “can’t say for sure” whether systemic racism is a problem with the police, on Friday afternoon she released a statement saying “systemic racism is part of every institution, the RCMP included”.

“Throughout our history and today, we have not always treated racialised and Indigenous people fairly,” she wrote.

What does the video show?

Before the public release of the footage on Thursday night, the local RCMP division said they had reviewed it and found the officer’s actions “reasonable”.

The incident begins when an RCMP officer approaches Mr Adam and his wife over an expired licence plate.

The nearly 12-minute-long video, recorded by a dashcam from the RCMP officer’s vehicle parked behind Mr Adam’s lorry in a casino car park, begins with Mr Adam having a tense and profanity-laden discussion with the officer.

“I’m tired of being harassed by the RCMP,” he says.

Mr Adam and the officer continue to have a heated argument. At about the 4:45 mark, the officer tries to arrest his wife, twisting her arm behind her back until she says: “Ow!”

That is when Mr Adam gets out again, shouting: “Leave my wife alone!” He pushes the officer away. Everyone gets back in the vehicle.

Backup is called, and Mr Adam gets out of the lorry. The officer begins to arrest him, and Mr Adam says “don’t touch me”, using an expletive. That is when a second officer runs at him full speed, knocks him down, and repeatedly punches him while shouting: “Don’t resist.”

The incident is being investigated by the Alberta Serious Incident Response Team, which oversees incidents involving police where someone is hurt.

What do Allan Adam and his lawyer say?

Mr Adam told Canadian media: “Because we are a minority and nobody speaks up for us, every time our people do wrong and the RCMP go and make their call, they always seem to use excessive force.

“And that has to stop. And enough is enough.”

Mr Adam’s lawyer Brian Beresh wants his client’s charges, which include assaulting an officer and resisting arrest, to be dropped. Mr Adam is next due in court on 2 July.

Mr Beresh has practised law for 44 years, and says police violence against indigenous people has been a constant issue.

“I’ve seen this from the first day I’ve started to practise,” he told the BBC.

“I’d like there to be some positive action taken by the RCMP, in terms of how they can prevent this from happening again. If this can happen with my client who’s a respected chief, what about the First Nations person who is living on the street, who doesn’t have my client’s standing?”

This video comes not so much as a surprise, but as a final straw to those who have for years been demanding an end to systemic racism and police brutality.

Over the past two weeks, thousands of Canadians have marched in mostly peaceful protests held in cities across the country for the Black Lives Matter movement. While the protests may have been sparked by the death of George Floyd in the US, the Canadians marching have been clear to say that systemic racism is not just an American problem.

In addition to Mr Adam’s arrest, the recent deaths in police custody of Regis Korchinski-Paquet, a black woman in Toronto, and Chantel Moore, an indigenous woman New Brunswick, have become touchstones in the wider discussion about race and policing in Canada, which has included calls to defund police.

Although Canada is often praised for its politeness and multiculturalism, especially in comparison to the US, it has its own legacy of violence and oppression of indigenous and black people to contend with – a legacy which continues to have ramifications today.

While most Canadian police forces do not track race-based data, media reports find that black Canadians are also more likely be stopped by police and experience police violence.

What is the political reaction?

Calls for an end to racial injustice are gaining traction. Prime Minister Justin Trudeau said on Friday he has “serious questions” after watching the video.

“We have all now seen the shocking video of Chief Adam’s arrest and we must get to the bottom of this,” he said. “The independent investigation must be transparent and be carried out so that we get answers.”

Last week, he marched in a Black Lives Matter protest and has said Canada has a problem with systemic racism “in all our institutions, including in all our police forces, including in the RCMP”.

But Mr Trudeau also faces serious criticism both personally and politically, especially after photos surfaced during last autumn’s election campaign of him in black face.

He has also been under scrutiny for not making greater strides at indigenous reconciliation.

Last year, a government report into murdered and missing indigenous women found that Canada was complicit in “race-based genocide” against indigenous women. Many of the report’s recommendations have yet to be implemented.

READ  Dalilah Muhammad: How the Olympic champions observed Ramadan during the coronavirus pandemic