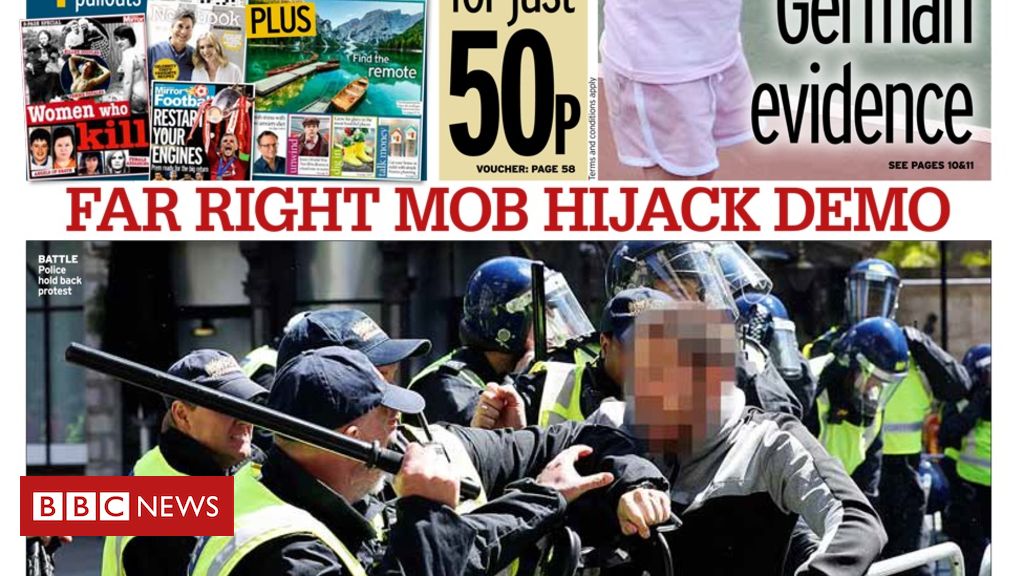 “Shameful” is the verdict given by both the Sunday Mirror and the Sun on Sunday on the violence seen at Saturday’s demonstrations.

The Sun captions images of bloodied crowds and embattled police in central London: “Thugs clash in Trafalgar Square” and “fury as yob wees on cop’s memorial”.

The Mail on Sunday’s front page asks: “What has become of the tolerant Britain we love?”

Inside it devotes several pages to shocking scenes from the day – with commentary by Douglas Murray suggesting the situation is out of control. “Anarchy is breaking out. Where are the brakes on this thing?” he says.

The paper leaves its readers in no doubt about its view of the current debate about historical monuments and statues. “Left-winger” demands that Sir Winston Churchill’s statue be torn down “beggar belief” and warrant the launch of a Mail petition to ensure it never happens.

The Sunday Telegraph leads on a claim that ministers are considering getting tough on protestors who overstep the mark following more violent scenes in the capital yesterday.

“Ten years in jail for protestors who desecrate war memorials” is its headline. Ministers have been forced to act, it says, because of pressure from Tory backbenchers to “get a grip” on a situation generating headlines such as “battle of Trafalgar Square” and “face off in Westminster”.

The Telegraph’s view is that the PM must now take the lead. He must, it says, wrest back from the hands of extremists, a legitimate conversation started in the wake of George Floyd’s death. It argues he must do what he did at the last election – speak for the forgotten middle.

“PM risking basic right to education” is the lead for Sunday’s Observer.

In an interview for the paper, the children’s commissioner for England, Anne Longfield suggests reduced schooling during the pandemic is becoming “default”, raising questions about whether every child’s basic right to education is being met.

The paper reports on government plans for catch up facilities – but Ms Longfield criticises Boris Johnson for “giving up quite easily” on his earlier commitment to prioritise the return of schools.

Pointing to Nightingale hospitals and the furlough scheme, she argues the government needs to find an equally drastic solution, to enable the reopening of all schools for all pupils.

The front page of the Sunday Telegraph reports that ministers are preparing to announce that all year groups can be welcomed back to primary schools – providing there is a maximum of 15 pupils per class.

The paper concedes teaching unions have dismissed the idea as logistically impossible for many primaries, though it says the move might be welcomed by fee-paying schools, who have lobbied for greater autonomy.

“PM takes charge on two metres” is the headline in the Mail on Sunday’s report on the review of social distancing which, it says, will “wrest control from scientists”.

The paper features an interview with leading restaurant boss Richard Caring who accuses Mr Johnson of “weakness and indecision” over relaxing the 2m rule, which he says risks “killing the country”.

The Mail agrees. Welcoming the review as “not before time” it argues that while Covid-19 is a major threat to health, its by no means the only one and that risks from loneliness, unemployment and the economic slowdown were also very real.

Sign up for a morning briefing direct to your inbox

The Sunday Mirror reports that Kate and Gerry McCann have called on the German prosecutor who suggested their daughter Madeleine was dead to provide evidence.

Under the headline “we just want the answers”, it sets out some of the confusion and divisions at the heart of the case.

It details how Hans Wolters has “backtracked” in an interview with the paper – conceding there was no forensic evidence supporting his theory, just his experience based on other previous cases.

“Nigel Farage to relaunch Brexit Party” is the claim of the Sunday Express.

The paper says Mr Farage has confirmed he is preparing a relaunch and “watching and waiting” because he believes that Boris Johnson and the Conservatives are losing control of the country, and could go soft on Brexit.

Sources described as close to the leadership are also quoted, suggesting “phones have been buzzing, donations pouring in.” The unnamed individual adds “we’re praying for a by-election in a Tory seat, and currently deciding on who would stand”.