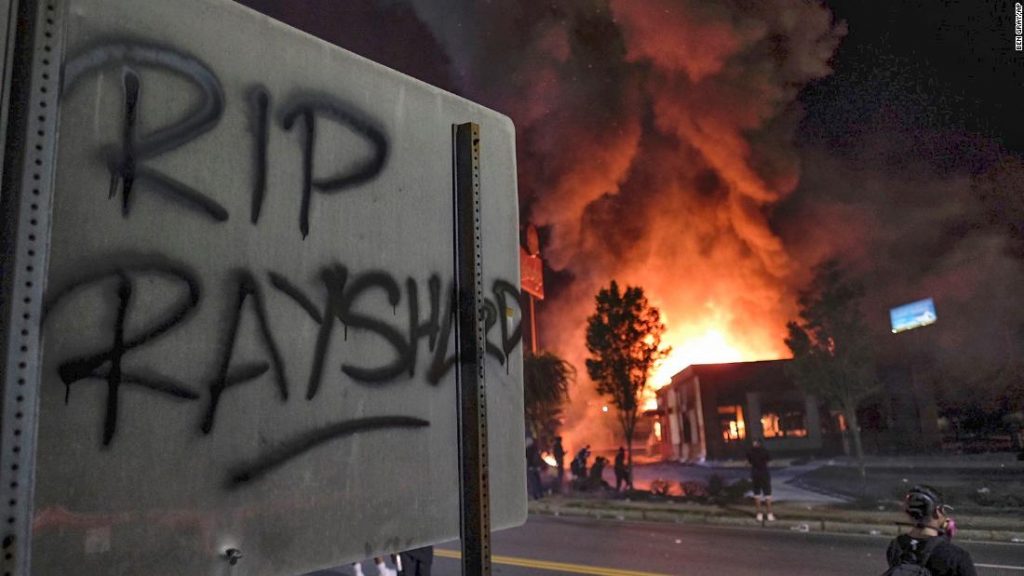 Less than 24 hours after his death, Atlanta Police Chief Erika Shields announced she was stepping down.

“I have faith in the mayor, and it is time for the city to move forward and build trust between law enforcement and the communities they serve,” she said in a statement.

The officer who killed Brooks was terminated Saturday, police spokesman Carlos Campos said. He was identified by police as Garrett Rolfe. A second officer involved in the killing was placed on administrative duty, Campos said. That officer was Devin Bronsan, police said in a statement.

Rolfe was hired in 2013 and Bronsan has been with the department since 2018, police said.

Brooks’ fatal shooting comes about three weeks after George Floyd’s death sparked global demonstrations that decried police brutality and racism. Floyd died after pleading for his life while a Minneapolis officer knelt on his neck for nearly nine minutes. Atlanta protests have remained ongoing since.

“So we’ve reached this point where the people have simply experienced too much.”

In Atlanta, protesters started gathering after Brooks was shot but tensions escalated Saturday night, when larger crowds congregated in the area surrounding the Wendy’s where the shooting occurred. Some shattered the store’s glass, CNN’s Natasha Chen reported.

By nightfall, the fast-food eatery was engulfed in flames. It took firefighters more than an hour to approach the building as it was surrounded by protesters, CNN affiliate WSB reported.
“I just want to make enough noise that they investigate the situation,” one protester told WSB. A large crowd remained on the streets of southwest Atlanta into early Sunday morning, the news station said, facing off with police.

A major interstate was also shut down after protesters marched onto a connector and were met by lined up police vehicles.

At least 36 people were arrested during the protests, an Atlanta police spokesman told CNN.

“I was very disturbed with what happened,” protester Marquavian Odom told CNN. “This is something that keeps happening over and over again. We’ve been protesting about George Floyd and I thought there was going to be a change, but there wasn’t a change, it was still the same old thing.”

“I thought the message was clear, but obviously we’re still not heard.”

How the fatal shooting unfolded

Police responded to a call Friday night about a man sleeping in a parked vehicle in the restaurant’s drive-through lane, causing other customers to drive around it, the Georgia Bureau of Investigation said in a statement. When they arrived, police gave Brooks a sobriety test, which he failed.

He resisted arrest, struggled with the officers and grabbed a Taser, the agency said. A video from a witness captured that struggle. The video, shot from a cell phone, shows a scuffle between two officers and Brooks. Brooks eventually seems to break free and starts running away.

Surveillance video provided by the GBI shows him running from the officers and appears to point the stun gun in their direction before falling to the ground.

He was shot and taken to the hospital, where he died, the GBI says. An officer was treated for an injury and released.

The GBI kicked off an investigation into the incident at the request of the Atlanta Police Department, officials said Saturday. Once that investigation is completed, the case will be turned over to prosecutors.

Protests ongoing in other parts of the US

Meanwhile, as outraged crowds marched in Atlanta, hundreds of others were on the streets in other parts of the country protesting police brutality.

In Washington, DC, a group of peaceful protesters marched through the city and onto a highway running to Northern Virginia. The march was one of a few that took place throughout Saturday.

In New Orleans, protesters Saturday tore down a statue of merchant and slave owner John McDonogh, dumping it into the Mississippi River. In a statement, the city’s mayor condemned the move, saying destruction of city property is unlawful.

And in Seattle, where protesters took over what they dubbed as the “Capitol Hill Autonomous Zone” near a vacated police precinct, crowds remained into the evening, CNN affiliate KOMO news reported.
Protesters rebranded the area as “Capitol Hill Organized Protest,” which they said better reflects their cause, according to the news station. The gathering in the area remained peaceful.

In Montpelier, Vermont’s capital city, dozens of volunteers painted a Black Lives Matter mural in front of the statehouse.

“Legislators, senators, that come into the statehouse, it’s a reminder that we need to make Vermont a more equitable place for everyone,” organizer Noel Riby-Williams told CNN affiliate WPTZ.
The mural is one of several painted throughout the US — including in the nation’s capital city. A giant, yellow “Black Lives Matter” now lines the street leading to the White House. It’s so big, the letters were seen from space last week.