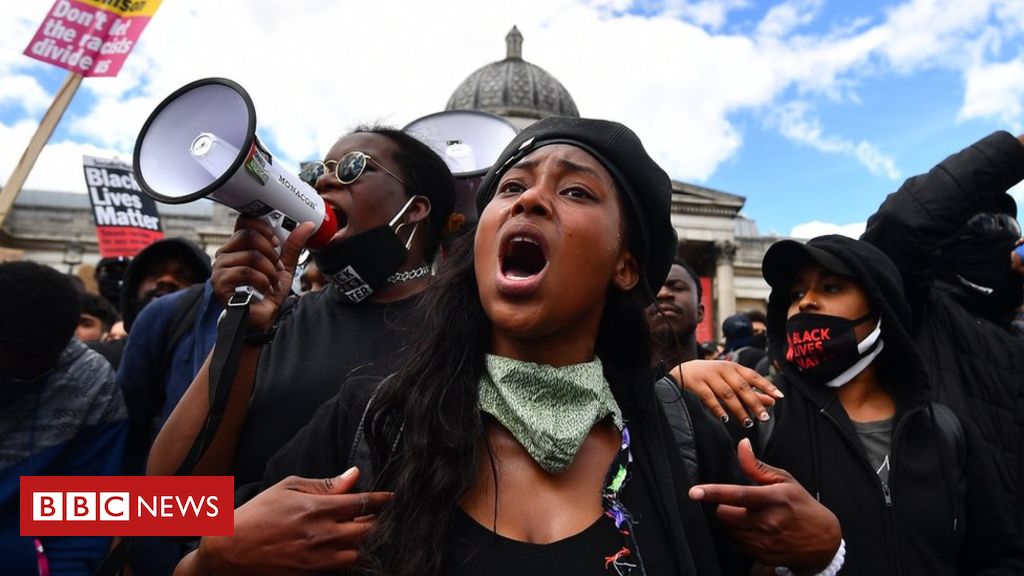 There is “much more that we need to do” to tackle racism but the UK should not try to “re-write the past” by removing historical symbols, the PM has said.

Writing in the Telegraph, Boris Johnson said he was setting up a commission to look at all “aspects of inequality”.

He said “no-one who cares about this country” could ignore the anti-racist demonstrations sparked by the killing of George Floyd in US police custody.

However, he added the UK’s heritage should be left “broadly in peace”.

Mr Johnson also condemned the “far-right thugs” involved in violent protests on Saturday, which saw more than 100 people arrested in London after thousands gathered saying they were protecting statues.

He said their mission was “utterly absurd” but he added that it was “deplorable” that Sir Winston Churchill’s statue had been in danger of attack.

It comes after the statue in Parliament Square was spray-painted with the words “was a racist” last weekend. In Bristol, anti-racism protesters pulled down a statue of slave trader Edward Colston.

The PM said he was setting up a commission to look at inequality as it was “no use just saying that we have made huge progress in tackling racism”.

He wrote: “There is much more that we need to do; and we will. It is time for a cross-governmental commission to look at all aspects of inequality – in employment, in health outcomes, in academic and all other walks of life.”

Questions over inequality in health outcomes have been repeatedly raised during the coronavirus pandemic after figures showed more people from ethnic minority backgrounds were “disproportionately” dying with the virus.

Thousands have people have marched in the UK as part of Black Lives Matter demonstrations following the death of George Floyd in Minneapolis last month.

Mr Johnson said that “the serious points” being raised by the anti-racist demonstrators should be taken seriously.

However, he said that did not mean “wasting time” disputing the life and opinions of “every historical personality currently immortalised in bronze or stone”.

“Let’s fight racism, but leave our heritage broadly in peace. If we really want to change it, there are democratic means available in this country – thanks, by the way, to Winston Churchill,” he said.

It comes as English Heritage is reviewing London’s 950 blue plaques to check if any have “problematic” connections and will warrant extra context published about them online, as first reported in the Times.

As for statues, English Heritage also said it believes the best course of action is to give extra context. “With the statues in our care, we need to ensure that the stories of those people already commemorated are told in full, without embellishment or excuses,” it said.

“We are in the midst of a global health pandemic that has sharply exposed deep structural inequalities which have long since needed urgently addressing,” she said.

“That the prime minister now says he wants to ‘change the narrative… so we stop the sense of victimisation and discrimination’ is condescending and designed to let himself and his government off the hook.”

But she added: “Its findings must not become simply another report on a shelf in Whitehall – the government must implement them without delay.

“Conservative ministers must not use this commission to avoid tackling racism and injustice right now. There are measures they could take tomorrow, such as scrapping their hostile environment policies or suspicion-less stop and search, that would begin to heal the divides and achieve true justice for BAME communities.”

Meanwhile, a survey of people’s attitudes to race in Britain carried out during recent protests suggests people are increasingly optimistic that the UK will become more tolerant and diverse.

When asked if they were optimistic Britain would be more tolerant and diverse in 10 years’ time, two thirds of people polled by Ipsos Mori said they were, up from half in 2009. And 84% of people strongly disagreed when asked if someone has to be white to be truly British – up from 55% a decade earlier.