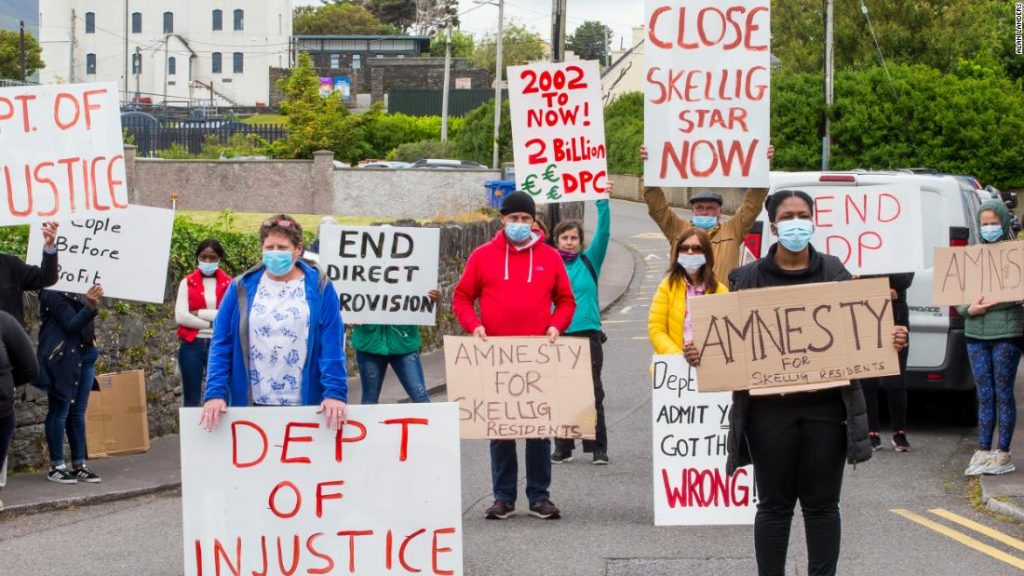 She had been waiting months for a decision to be made on her asylum status. But the letter wasn’t about that.

“I was scared for my life,” said Misha, who asked that her real name not be used for fear it might impact her asylum claim.

About 100 people in total were transferred from a handful of centers, including from one Dublin hotel where a guest from Italy had reportedly contracted the virus.

Just days after they arrived, one of the residents started showing symptoms, according to three people CNN talked to. Then the rumors started.

“I was scared for my life.”

The Cahersiveen community had been given just as little time to prepare; locals found out only a few days before that the Skellig Star — rebuilt in 2006 on the promise of drawing tourists with a swimming pool and other leisure facilities — was being converted into accommodation for asylum seekers.

Despite their lack of consultation and concerns over losing business from the only major hotel in town, people in Cahersiveen welcomed the group, bringing them clothes and toys. But when news began swirling that asylum seekers were getting sick, and still shopping in the local stores, people in the small town began to panic.

“Rural Ireland would love to have these people living in the community … they’d be more than welcome,” said Jack Fitzpatrick, chairman of the Cahersiveen Community and Business Alliance. “But, this is not the way to do it, to plunk 100 people into a very congested hotel in the midst of a pandemic.”

The outbreak, which swiftly spread through the hotel, infecting 25 people at its peak, was declared over on May 20 by Ireland’s Health Service Executive (HSE), but local residents and asylum seekers are continuing to push for the center to be shut down, joining together as a united front in a series of demonstrations.

Under a system known as Direct Provision, overseen by Ireland’s Department of Justice and Equality and operated by private businesses on lucrative contracts, asylum seekers are housed in emergency accommodation while they wait to find out if they will be granted refugee status and permission to stay in the country.
Calls for reform of the system, introduced initially as an emergency measure by the state in 1999 after a sudden increase in asylum applications, have coincided with sweeping, global protests for racial justice following the killing of George Floyd in the US.
Asylum seekers — many of whom are from African countries — have condemned Direct Provision for “institutionalized racism” on the part of the government, arguing that no one else in the country is treated in the same way as they are.
While their appeal is being assessed, they’re provided with free accommodation, food and utilities, and have access to healthcare and education, but they have almost no autonomy and cannot choose where they live. And they are unable to apply for a work permit until at least eight months into their application process — expected to survive on a weekly allowance of €38.80 ($43) instead.
Commenting on the comparison between Direct Provision and the murder of George Floyd earlier this month, Irish Prime Minister Leo Varadkar conceded that while some Direct Provision accommodation was substandard and needed to change, it “ultimately is a service offered by the state … involves people being provided with free accommodation, food, heat, lighting, health care, education, and also some spending money.”

“It’s not the same thing as a man being killed by the police.”

Decisions on asylum cases in Ireland can take years, a fact that has been criticized by the United Nations Refugee Agency, which recently called for the process to be sped up. And rejection rates are high — around 70%, according to recent figures. Dozens of people have died waiting, according to a Freedom of Information request from The Irish Catholic.

Not fit for purpose

Ireland’s Fianna Fail, Fine Gael and Green Party struck a draft deal to form a new coalition government on Monday, which, if ratified by the members of the three parties, will end months of political stalemate since the country’s election in February. It will also inject urgency into reforming the Irish asylum system. One of the key commitments outlined in the agreement is a pledge to end Direct Provision and replace it with an accommodation policy centered on a not-for-profit approach.

Liam Thornton, a law lecturer and Direct Provision expert, greeted the decision with cautious optimism. “After 20-plus years of government denial that anything much was wrong, it’s interesting to see,” he told CNN. “While we haven’t been here before, it is implementation that will be key.”

Thornton tweeted: “Direct Provision is one of the darkest chapters in the Dept of Justice history. But it takes people to design, administer, implement such awfulness. New mindsets needed ASAP.”

Asylum seekers, human rights campaigners and legal experts such as Thornton say the pandemic has shone a spotlight on structural problems that have long existed in Ireland’s asylum system. Against the backdrop of Covid-19, the often crowded, poor conditions have become that much more apparent.

“HSE has been advising us, and everybody, on social distancing, but you cannot social distance where there is no space,” Misha said.

Misha says she watched in horror as people started falling sick around her, before being pulled into makeshift isolation rooms. The first suspected case of Covid-19 in the center was reported as early as March 24, the Justice Department has conceded, adding that the person did not test positive. They did not say when the test was conducted.

According to asylum seekers and a previous manager, testing of asylum seekers didn’t start until weeks later in mid-April. After positive cases were confirmed, all residents at the Skellig Star were ordered to stay inside and quarantine.

“I have verifiable evidence of a written communication from the Skellig Star to the Department of Justice and Equality on 24 March confirming a suspected case of Covid-19. The resident concerned was placed in isolation on 20 March, one day after arrival in Cahersiveen,” Member of Parliament for Kerry, Norma Foley, said in a special parliamentary committee hearing on the government’s Covid-19 response.

In a statement to CNN regarding the timeline, the Department said it had made an “honest mistake” in failing to receive the March 24 communication and that “there was no attempt by the Department … to intentionally mislead or conceal the facts” related to the outbreak.

“Our biggest fear is a second wave … We’re afraid it will spread like wildfire in the hotel again, but next time it may also go through the community.”

After her roommate tested positive and was taken away to self-isolate at another center, Misha thought that someone would move her, so that the room could be disinfected. When no one came, she said she raised her concerns with an HSE worker on site, who told her there was no reason to worry.

“It was an embarrassment to my intelligence,” Misha said. She tested positive 10 days later.

Ireland’s Justice Department told CNN that an HSE Development Worker was at the hotel to monitor the health of residents and staff throughout the outbreak, and is now providing more general support, including accessing mainstream health services and integrating in the local community.

The Department said it was continuing to work closely with the HSE and Cahersiveen center managers to ensure the wellbeing of all residents and staff, including offering all single residents their own bedrooms and providing enhanced cleaning services. The center also intends to provide self-catering facilities so that residents can cook in their rooms, instead of eating together in a communal dining room.

Townbe, the company that operates Skellig and three other Direct Provision centers, did not respond to CNN’s request for comment. The Justice Department said it was unable to comment on the value of the contract with Townbe until after two years, because of commercial sensitivity.

But the conditions detailed by the Justice Department differ dramatically with what was described to CNN by two asylum seekers and one previous manager at the center.

When Misha and the other asylum seekers arrived at the Skellig Star in mid-March, they said they found a holiday hotel that was not ready for guests, or prepared to cope with the coronavirus. The central heating was broken, the bedrooms — which were smaller than standard size — were not deep cleaned, isolation rooms had not been established, personal protective equipment was not made available and staff had not been vetted by An Garda Síochána, Ireland’s national police service.

Bulelani Mfaco, an activist who has been living in Direct Provision since 2017, detailed some of these conditions in a report for the Movement of Asylum Seekers in Ireland (MASI), laying out recommendations for wide-ranging reforms of the system. Top of his list: Guaranteeing a suitable standard of living that protects the physical and mental health.

“Cahersiveen demonstrates to us that the model doesn’t work,” Mfaco said. “Giving vulnerable people to hoteliers, who have no training. No thought was given to the risk of gathering all these people, cramming them into a bus and bringing them to a remote village far from any healthcare services.”

Jack Fitzpatrick and other locals are fearful that those healthcare services will be overstretched if another outbreak hits.

The closest major hospital to Cahersiveen, which has a population of around 1,000, is 40 miles away. There are only two doctors in Cahersiveen, and one ambulance serves the entire remote Iveragh Peninsula, where the town is situated.

“We were very lucky that nobody died in the hotel, and that we managed to stop the virus going widespread in the community,” said Fitzpatrick.

“Our biggest fear is a second wave … We’re afraid it will spread like wildfire in the hotel again, but next time it may also go through the community. So we are basically doing our best to try to get them to close it down and move the people to sort accommodation.”

People in the town are demanding the resignation of Justice Minister Charlie Flanagan, who they say misled the public over the Covid-19 outbreak at the Skellig Star.

“We should be given, at least, the status of permission to remain so we can have our own-door accommodation, cook our own meals and keep ourselves and our families safe from the virus.”

Flanagan has apologized to the people of Cahersiveen, but said his department had no knowledge of the infection in the Dublin hotel before transferring asylum seekers from it.
In the wake of the outbreak, Flanagan has asked the former Secretary General to undertake a review of the Department’s response to Covid-19 in direct provision centers like Cahersiveen.

Ciaran Quinlan, of Cahersiveen, told CNN he is seeking an injunction to close the center. He says he wants “to help these people to get their own front-door accommodation, and to move them out of the unsuitable accommodation that they’re in.”

Azwar Fuard, an asylum seeker who has been acting as a spokesman for the 70 residents remaining at the center, is calling on Flanagan to grant the Skellig Star residents amnesty to remain in Ireland.

Fuard, originally from Sri Lanka, was moved from the same hotel as Misha in Dublin with his young family just as they were starting to feel settled. Both Fuard and his wife had found work in the capital, made friends, and their three-year-old daughter had started going to pre-school. To be ripped away from yet another life, he said, was like a double trauma.

Now he says the family of three is largely confined to a 12ft x 13ft room, with an ensuite bathroom and no cooking or washing facilities.

“We should be given, at least, the status of permission to remain so we can have our own-door accommodation, cook our own meals and keep ourselves and our families safe from the virus,” Fuard said.