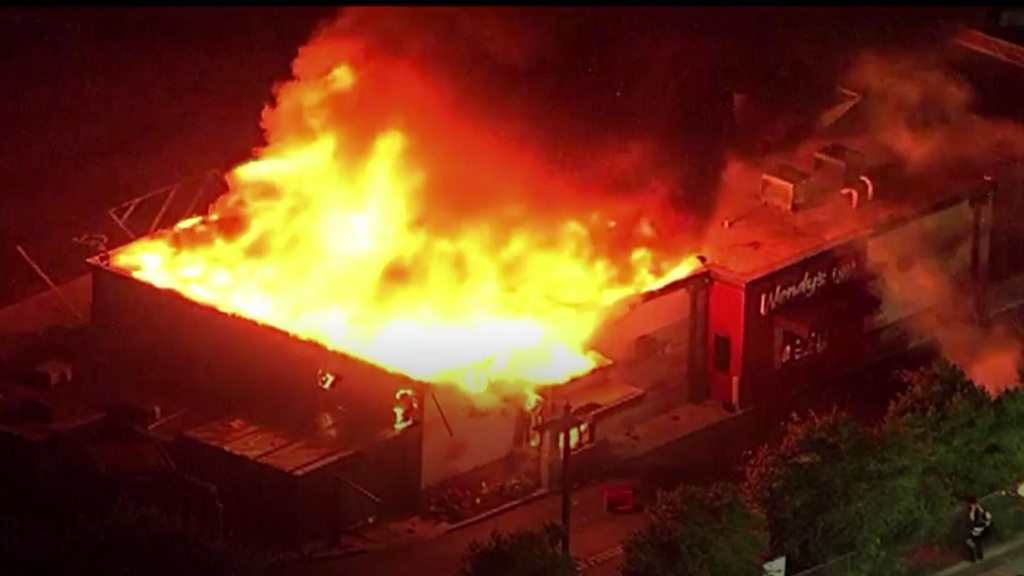 A medical examiner in Atlanta, Georgia, has declared the death of an African-American man to be homicide after he was shot in an encounter with police.

Protests erupted after his death, weeks after another black man, George Floyd, was killed in custody in Minneapolis.

Following his death, the Wendy’s drive-through restaurant where he was stopped was set on fire on Saturday.

Thousands of people joined Black Lives Matter protests across the US at the weekend.

In Chicago, a statue of the first US President, George Washington, was spray-painted with the words “slave owner”.

Washington was an active slave holder for 56 years. While spoke of his desire to end the practice, at the time of his death in 1799, 317 enslaved people lived on his Mount Vernon estate. The founding father left instructions in his will for the 123 slaves he owned outright to be freed, only once his wife Martha had died.

Graffiti covers the more than 100 year old George Washington statue on the Southside.

Some neighbors want the statue to go, others say it’s part of history. pic.twitter.com/ePlN5JyAlr

Crowds also gathered again in Washington DC near the White House while in Los Angeles, a large number of LGBT protesters marched with rainbow flags to denounce what they said was police brutality, racism and transphobia.

And anger over the killing of Mr Floyd, who died as a police officer held his knee on his neck on 25 May, fuelled new protests over the weekend in the UK.

What is the latest on the Atlanta shooting?

On Sunday evening, more than 100 people turned out in the rain at the site of the shooting for a peaceful protest.

According to the Fulton County medical examiner, the manner of death of Rayshard Brooks was “homicide.” He suffered two gunshots to the back that caused organ injuries and blood loss.

“But I believe in this instance, what we have to choose between, if there’s a choice to be made, is between murder and felony murder,” Mr Howard said.

The Georgia Bureau of Investigations (GBI) says officers were called to the fast-food restaurant because Mr Brooks had fallen asleep in his car, which was blocking the drive-through lane.

Body camera footage released by the police department shows the two officers administering a sobriety test – where a suspect is asked, for instance, to walk in a straight line – and then a breathalyser test, with Mr Brooks’s permission.

The two officers then try to handcuff him, at which point their body cams fall off, but security camera video shows them struggling with Mr Brooks on the ground.

He then grabs an officer’s Taser (electric stun gun) and breaks free from the officers, running away.

As he is chased, Mr Brooks is seen turning around and pointing the Taser before continuing to run and then being shot.

“As I pursued him, he turned and started firing the Taser at me,” Mr Rolfe told a supervisor after the shooting in a videotaped conversation. “He definitely did shoot it at me at least once.”

GBI spokeswoman Nelly Miles said she could not confirm whether Mr Brooks had indeed fired the Taser, the Associated Press reports.

Atlanta Mayor Keisha Lance Bottoms said she did not believe the shooting was a “justified use of deadly force”.

This is the 48th “officer-involved shooting” the GBI has investigated this year, according to ABC News. Of those cases, 15 were fatal.