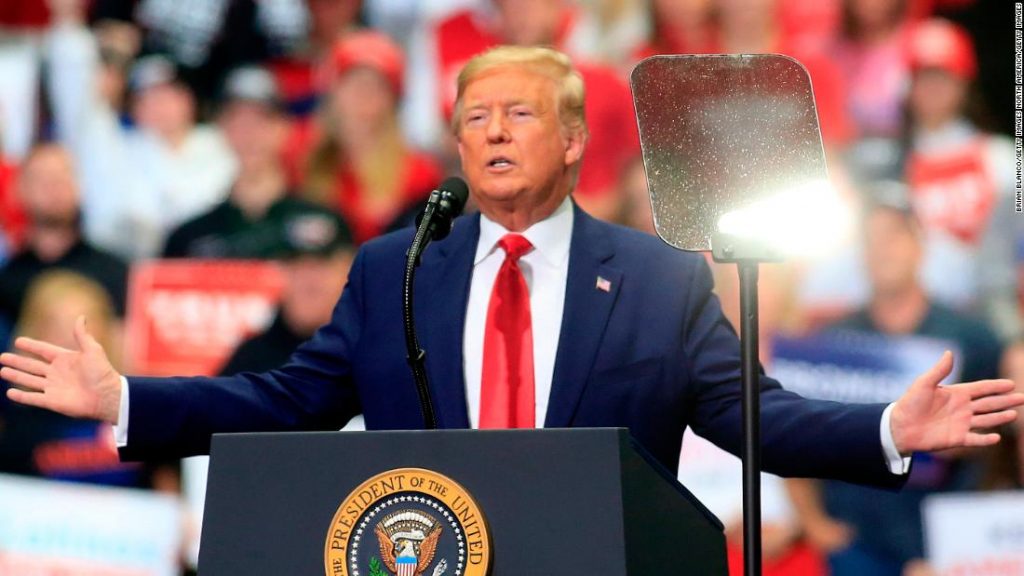 In effect, it will be one of, if not the first, mass participation event indoors anywhere in the world in months. Trump’s 20,000-strong crowd will be packed together, flouting social distancing, at a moment when major North American sports leagues are weeks away from playing games — without spectators amid fears of creating “super-spreader” events.

His attitude is coinciding with tangible public fatigue after weeks of stay-at-home orders and restrictions on where people can travel, eat and socialize. And it suits him, with his reelection campaign in cold storage for weeks, to leave the impression that the country has already prevailed.

But health experts are warning that the President’s attitude is undercutting nationwide efforts to fight the disease, and could cost lives and inflict even more damage on an economy crushed by lockdown orders. A closely watched model by the Institute for Health Metrics and Evaluation at the University of Washington on Monday predicted more than 201,000 Covid-19 deaths in the US by October 1. The projection forecasts a sharp rise in daily deaths in September and October.
With all this in mind, there is little sense in which Trump has leveled with the American people about the extent of the challenge still posed by Covid-19. If anything, he is promoting an unspoken acceptance about a death toll — currently more than 116,000 dead in the US — that most people never experience until it directly affects a friend or relative. There are few signs the White House is girding the nation on a common crusade of shared sacrifice.

Trump on Monday suggested that the disease was already a faded threat in comments that defied science and logic.

“If we stopped testing right now, we’d have very few cases, if any. But we do,” Trump said, in remarks that recalled his initial denial that the coronavirus would be a threat to the United States early in the year — until it was too late.

The virus hasn’t gone away

While Trump is ready to move on, the virus — though it may have been slowed — has not gone away. In a sign of the months of heightened vigilance that are ahead, authorities in Beijing who had thought they had beaten their outbreak of the disease — which then spread around the world — are battling to contain an outbreak in the Chinese capital that threatens to unleashed a genuine second wave of infections.
But Trump is leaving the impression that normality is just around the corner, despite warnings by one of his top government health experts, Dr. Anthony Fauci, that such a welcome state could be a year away.
Despite pleas from health authorities in Oklahoma to postpone his upcoming rally to avoid spreading the novel coronavirus, the President is doing the opposite — talking about organizing a second mass rally indoors to showcase what his campaign says is an overwhelming response to the event. Trump’s campaign said it will test temperatures of rallygoers and offer masks and hand sanitizer. But thousands of people are set to be crammed together in a hot arena for hours in conditions that are ideal for the spread of the virus.

The President’s daughter-in-law, Lara Trump, who serves as a senior campaign adviser said that his team would not force people to wear masks at the rally and accused critics of hypocrisy following the large scale protests across the nation during the aftermath of the death of George Floyd — which some health experts also fear could have spread infections.

“Everybody has a choice. Nobody is being forced to sign to come up to this rally. This is a record-setting response that we have gotten to this and I think it speaks to the fact people are ready to get back to life,” she said on Fox News.

The event will undoubtably send a strong political signal, could reinvigorate Trump’s campaign, will certainly make the President feel better and could hike pressure on presumptive Democratic nominee Joe Biden to be more daring with his own campaigning. But the rally could also come with a deadly coda. So it’s hardly surprising there are mounting questions about the President’s sense of responsibility and his willingness to potentially sacrifice the health of his own supporters to further his political goals

“Oklahoma has done very well, I just spoke to the governor, he’s very excited about it,” Trump told reporters at the White House on Monday.

The President is correct that Oklahoma, like many western states, has not been as badly hit by the pandemic as some more populous cities and states on the coast. But the state’s infection curve has been rising in recent days and on Friday recorded its biggest daily spike in Covid-19 cases, prompting the director of Tulsa’s health department to say he wished Trump would postpone the rally.

‘There is a lot we need to do’

As they seek to justify Saturday’s rally, Trump and his top aides are offering an overly rosy picture of the state of the pandemic in Oklahoma.

Pence left an impression that the worst of the Covid-19 storm has passed by saying that there were “less than 400” deaths from the virus nationwide on Sunday, even though fatality statistics typically lag, and there is concern about growing infections in states that have aggressively opened their economies, including Texas, Florida, South Carolina and Arizona.

Pence’s claim that Oklahoma has flattened the curve is not supported by data collected by CNN and based on Johns Hopkins University analytics that show a steadily rising infection rate in the state over the last two weeks.

There is no doubt that Trump may find a receptive audience for his wish that the pandemic would just go away. Stories of people not wearing masks and ignoring social distancing recommendations after weeks stuck at home are popping up all over the country. New York Gov. Andrew Cuomo, a Democrat, is warning that he will reinstate restrictions if people break the rules. But the President’s stance — given that he has the loudest megaphone in the country and is undermining his own government’s safe opening recommendations — is dismaying many health professionals.

“It just feels like we’ve kind of lost our will to do it. And I think that’s unacceptable,” Jha said, warning that Trump’s fear of US virus numbers looking bad was draining the political will to fight the pandemic.

‘Life is no longer a picnic’

The news is not all discouraging. Deaths from the coronavirus are currently falling, including in hard hit areas such as New York, New Jersey and the metropolitan areas around Washington, DC. There are reasons to hope that with the wearing of masks, social distancing and by avoiding large crowds, the country could find a middle way to exist and open the economy while living with the virus.

William Haseltine, the chairman and president of ACCESS Health International, said Monday that Americans need to recall a period of time before advanced medical treatments, when life was far more precarious but when the country still built its great cities, railroads and fought World War II.

“Society functions but it functions differently. It functions with a sharp awareness that we live in a privileged moment that any time can end. And that’s a fundamental change in the way people have to look at life. Life is no longer a picnic,” Haseltine said on CNN’s “New Day.”

“I urge everybody to think about the risks they’re putting themselves, their family and everyone they love (in) when they behave what I would call irresponsibly by not following the recommendations of wearing masks and social distancing. It’s a new reality that we have to accommodate. We adapt, we survive, but we have to accommodate,” he added.

That is exactly the kind of advice to the American people that a president would be expected to give, rather than denying the reality of a crisis that is threatening to kill tens of thousands more of his fellow citizens.