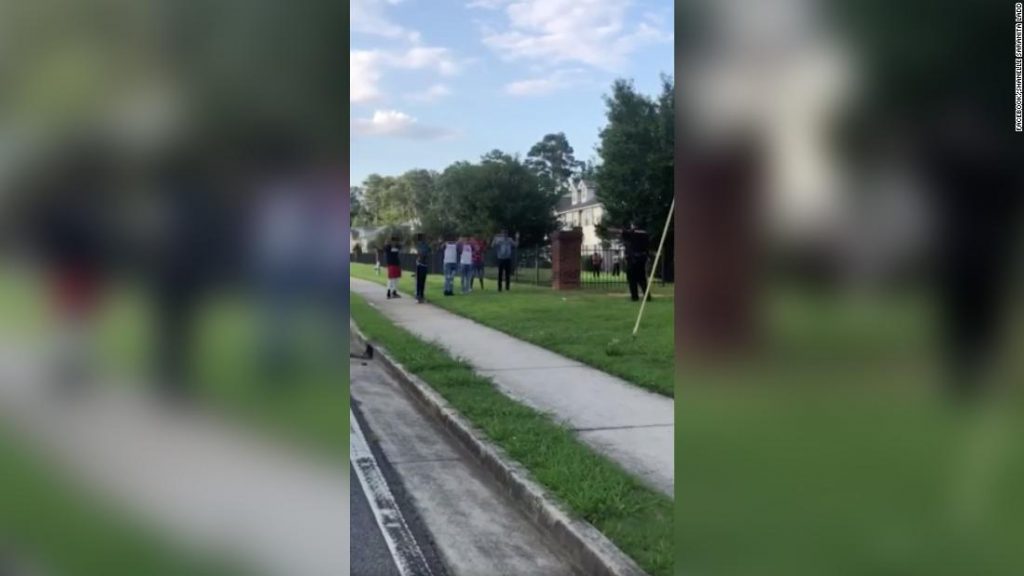 “Please, sir. They are kids,” she shouted at the top of her voice, telling a Clayton County police officer. “Why you got a gun out?”

Ladd’s video of the Monday encounter in Jonesboro, Georgia, has circulated on social media, renewing demands for change from community members, including rapper T.I., amid a nationwide debate over racial justice and police brutality in the wake of George Floyd’s death.

Police responded Monday to reports that a group of teenagers had a handgun and were fighting in a store’s parking lot, Clayton County Police said in a statement. Surveillance video released by police and reviewed by CNN does not show any fighting.

When an officer arrived at the store, police said, the teens were no longer there but were spotted shortly after, walking down the street.

A 17-minute video from the unidentified officer’s body camera released Tuesday shows the interactions between the teens and the officer.

The officer pulled over after he saw the teens, drew his handgun as he exited the car and began yelling “Stop, all of y’all stop” as he walked toward the teens.

“Due to the allegation that the juveniles were in possession of a gun, the officer approached them with his duty weapon drawn and pointed at the juveniles,” the police department said in a statement.

The officer then tried to calm the teens several times to convey what he’s trying to do, even as bystanders gather around shouting, adding to the rising tension.

“Listen to me, so you don’t get hurt,” the officer can be heard saying in the body camera footage. “Don’t move, don’t move… please, I don’t want to hurt one of y’all.”

The officer kept his handgun out for more than 4 minutes, pointing at the ground, as the teens stood in a grassy area with their hands over their heads.

“What just happened at the store?” the officer can be heard asking in the video. “Why does the guy think you have a gun?”

As the officer spoke to the teens, bystanders approached the area, calling him out.

“People got out in their cars around me,” Ladd told CNN. “There were about 30 of us, telling the kids to remain calm and begging the officer to put his gun down.”

The officer called for backup after he told dispatch about a “crowd forming around me.”

The officer holstered the handgun when another officer arrives and both begin searching the teens, according to the body camera footage. Police said none of the teens were carrying a gun.

Police said the teens “were cooperative and remained with their hands visible as instructed,” which can be seen in Ladd’s video.

After searching the teens, the officers returned to the store with the teens and asked them about whether they had a gun. The teens told them they had a BB gun — which resembles a semi-automatic pistol — and directed officers to the nearby bushes where they had tossed it, police said.

“It’s five of y’all. It’s one of me. Nobody got hurt, y’all listened to me. That was great. I don’t want to die y’all,” the officer told the teens when they were back in the store.

“Listen you are not in trouble,” the officer can be heard telling one of the teens in the body camera video. “You can get hurt, you shouldn’t have BB guns… I got kids just like you,” he said at another point.

The teens were not arrested and no charges were filed, police said.

“I thought I was gonna die because I’ve seen all these black kids dying and to have myself in that, it was just crazy,” Kamari Moore, one of the teens involved in the incident, told reporters on Tuesday.

Moore and Ladd along with local activists and rapper T.I. also spoke with reporters.

“Why are only people of color, young black boys, young black girls being gunned down into the hands of policemen and using excuses like BB guns?” T.I. said. “They have white boys, they got real rifles they go hunting, every day, every week with their grandparents and parents. They aren’t being held at gunpoint.”

For Ladd, the incident was alarming and just another reminder that changes in policing are needed.

“Every black child is not a suspect. We should not be treated that way,” Ladd told CNN. “They need to be better and building and respecting the communities they are in and not working against us.”