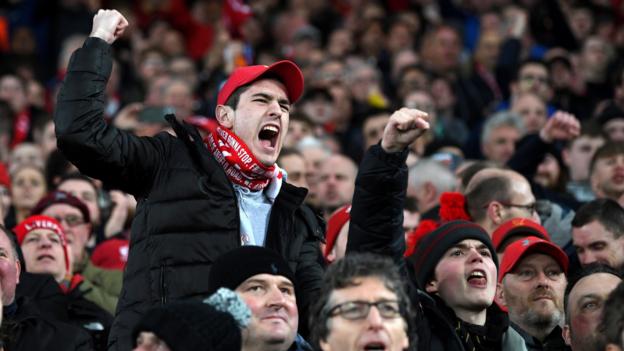 The English top flight restarts on Wednesday after a 100-day break because of the coronavirus pandemic with fixtures played behind closed doors.

Masters did not put a timeframe on a return of fans to stadiums but said talks had begun with the government.

“The Premier League is back but it won’t be fully back until we get those fans back inside the stadium,” he said.

“We’re very keen to see fans back in the stadium at the earliest possible juncture when it’s safe and appropriate to do so.”

The league returns with Aston Villa against Sheffield United on Wednesday at 18:00 BST, before Manchester City host Arsenal at 20:15.

There will then be another 90 games to fit into a compressed schedule.

“It is a big moment because it’s unprecedented and it will feel different because we haven’t got fans inside the stadium,” Masters told BBC Sport.

“But whilst it’ll feel different, hopefully what’s riding on the games, the quality of the football and the passion, some of the Premier League will still come through.”

Masters also pleaded with fans not to congregate outside stadiums.

“By turning up to the game, you are potentially putting it in jeopardy, something that we’ve worked really hard for, which is to play those matches at home and away,” he said.

Players’ names will be replaced on the back of their shirts with ‘Black Lives Matter’ for the first 12 matches of the restarted season, as part of the league’s response to the anti-racism protests seen globally since the death of George Floyd.

READ  London monuments boarded up ahead of protests

Masters backed the statements, with the Premier League supporting any player who chooses to ‘take a knee’ before or during matches.

“I don’t see the statements that are being made as overtly political statements,” Masters said.

“They’re ethical values-driven statements. And yes, I do think that the players are now speaking with a clearer voice, and I see that as a good thing.”