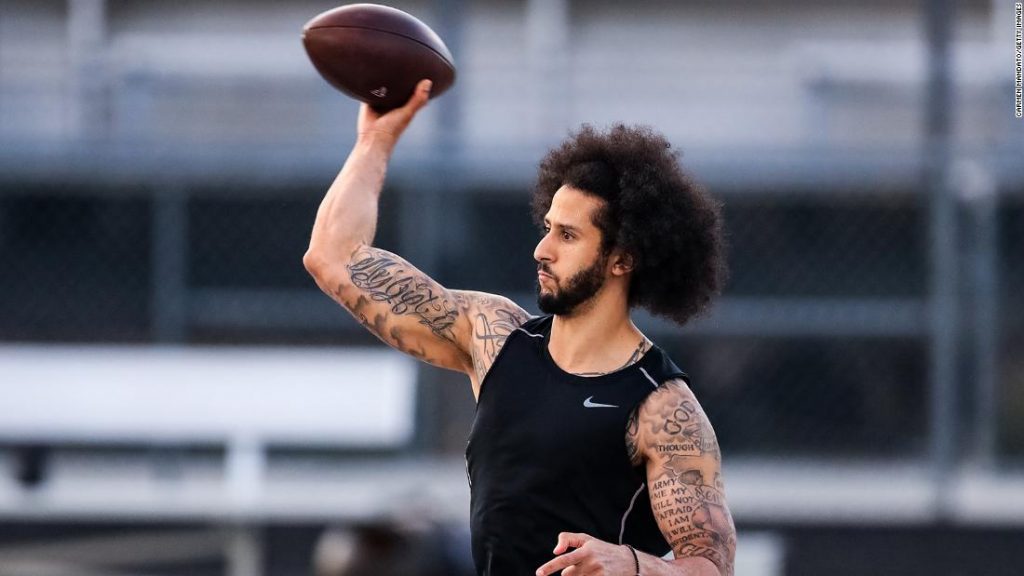 “Well, listen, if he wants to resume his career in the NFL, then obviously it’s going to take a team to make that decision,” Goodell said. “But I welcome that, support a club making that decision and encourage them to do that.”

Goodell’s video, in response to NFL players calling on the league to condemn racism and support its black players, did not mention Kaepernick, an omission for which the commissioner was criticized.

Referring to Kaepernick in the ESPN interview, Goodell said: “If his efforts are not on the field but continuing to work in this space, we welcome (him) to that table and to be able to help us, and guide us, help us make better decisions about the kinds of things that need to be done in communities.”

Kaepernick has been invited into these conversations before, Goodell said.

“We want to make sure that everybody’s welcome at that table, and trying to help us deal with some very complex, difficult issues that have been around unfortunately for a long time,” Goodell said. “But I hope we’re at a point now where everybody’s committed to making long-term, sustainable change.”

The NFL’s discussions come as the nation has been gripped by prostests and conversations about police brutality and racism in the wake of the deaths of George Floyd in Minneapolis, Breonna Taylor in Louisville and Rayshard Brooks in Atlanta, at the hands of police.
Kaepernick hasn’t played in the league since the 2016 season — the same season he first sat during the playing of the National Anthem. The protest evolved into kneeling after onetime Seattle Seahawk and Green Beret Nate Boyer convinced Kaepernick it would be more respectful to the nation’s military, the quarterback has said.

No team offered him a contract, and that October, he filed a grievance against the league. Kaepernick accused NFL team owners of colluding to keep him from being signed. The NFL denied any collusion but in 2019, they reached a settlement with Kaepernick and former teammate Eric Reid, who knelt with him.
In November 2019, Kaepernick called off an NFL workout in Atlanta after his representatives said his request to have a film crew was denied. He ended up holding his own workout session in Riverdale, Georgia.
READ  Despite the Canadian government appealing to seniors to stay indoors, many snow birds are coming south