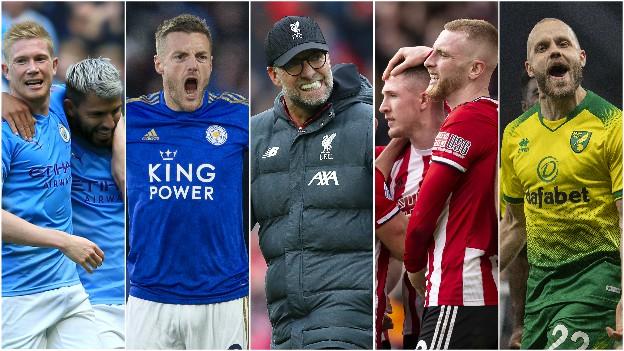 The Premier League returns on Wednesday… but not exactly as we know it.

After a 100-day absence because of the coronavirus pandemic, Aston Villa v Sheffield United will kick off the English top-flight’s resumption.

It is the first of 92 league games that will be packed into a frantic 40 days before the season concludes on 26 July.

Fixtures will be played behind closed doors as one of a host of measures to prevent any further cases of the virus.

A minute’s silence to remember those who have died with coronavirus will be held before the first matches, while heart-shaped badges in tribute to frontline NHS staff will also be worn on kits.

For the first 12 matches of the restarted campaign, all player names on the back of shirts will be replaced by “Black Lives Matter”.

This follows the death of George Floyd in the United States, which has sparked protests worldwide.

Over eight rounds of twice-weekly coronavirus screenings of Premier League players and staff, there have been 16 positive results from 8,687 tests.

All remaining 92 games will be broadcast live, with four matches to be shown on the BBC – the first to be made free-to-air on terrestrial television since the Premier League’s inception in 1992.

Liverpool sit 25 points clear at the top of the table while Bournemouth, Aston Villa and Norwich City are in the relegation places.

The Reds, chasing a first league title in 30 years, could clinch it with victory in their first game back should second-placed Manchester City lose to Arsenal on Wednesday.

Why is the Premier League returning now?

With the number of new infections falling and lockdown restrictions in England being gradually eased, the Premier League agreed it was safe to resume with the correct safety measures in place.

This was followed by the UK government giving the go-ahead for elite competitive sport to resume behind closed doors from 1 June.

Premier League players and staff will continue to be tested twice a week, with any players or staff who test positive self-isolating for a period of seven days.

The delaying of Euro 2020 by a year provided the Premier League with greater flexibility in which to fit in fixtures.

But there remains a time pressure imposed by issues with players’ contracts, many of which run out on 30 June, and the scheduled start of the 2020-21 season in August.

There is also a financial incentive to resume playing, with the threat of an increased or restructured rebate to TV companies if fixtures are not completed.

When are the games?

The fixture list, including kick-off times, for the first 32 matches after the restart was announced on 5 June.

Aston Villa will face Sheffield United in the opening match at 18:00 BST on Wednesday, before Manchester City host Arsenal later the same evening.

The first full round of fixtures will then be played over the weekend.

The BBC will show Bournemouth v Crystal Palace on 20 June at 19:45 BST, followed by Norwich v Everton on 24 June at 18:00, and then two matches yet to be confirmed.

As well as the four live games, there will be additional Match of the Day highlights programmes.

Sky Sports will make 25 of the remaining top-flight matches free to air, including the Merseyside derby at 19:00 on 21 June. Amazon Prime’s four matches will also be broadcast for free.

BBC Radio 5 Live and Talksport will also provide live radio commentaries for all the remaining matches, while BT Sport will show the first Saturday 15:00 Premier League match to be broadcast live in the UK when Brighton take on Arsenal on 20 June.

What new measures have been put in place?

How did we leave things?

Before the suspension of play in the Premier League, Liverpool were hurtling towards their first top-flight title in 30 years.

The league will restart with the Reds 25 points clear at the top and potentially one win away from confirming their triumph.

If Manchester City lose their game in hand – against Arsenal on Wednesday – Jurgen Klopp’s side will seal the title with victory in the Merseyside derby at Everton on Sunday.

The race for a top-four spot is less of a formality.

Liverpool, Leicester, Chelsea and Manchester United are currently occupying the qualification places, but the likes of Wolves, Sheffield United, Tottenham and Arsenal will all begin again with a place in Europe’s top competition as their aim.

Down at the bottom, six clubs are seemingly battling it out to avoid the drop.

Bottom club Norwich are six points adrift on 21 points. Aston Villa and Bournemouth are the two clubs above them but are part of a group of five clubs, along with Watford, West Ham and Brighton, separated by just four points.