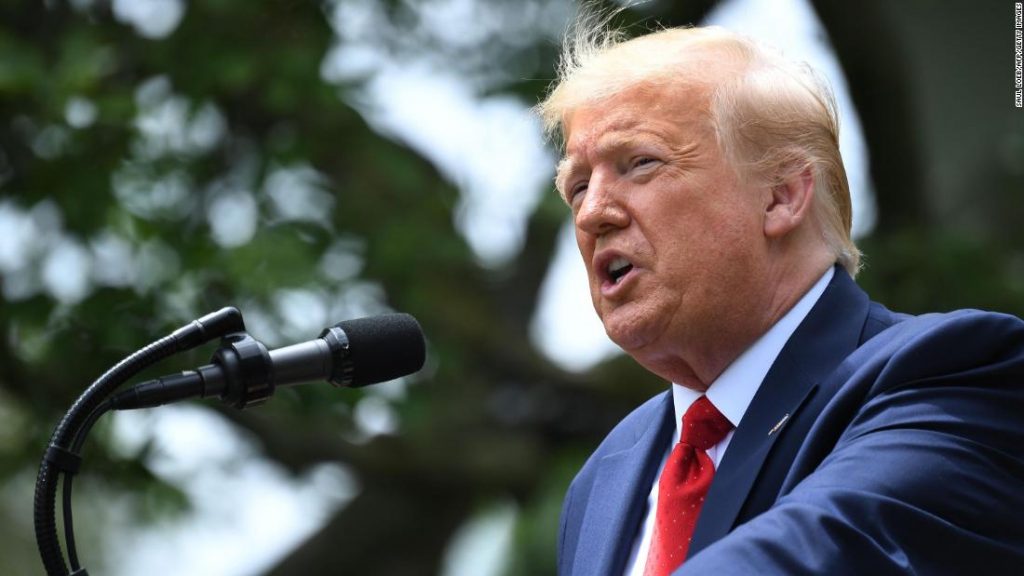 But later he veered from that topic and that tone to assault his political rivals and tout the stock market’s recent rally.

It was a performance that laid bare the balance Trump faces as he continues to embrace a hard line “law and order” mantle, which he believes benefits him politically, even as he confronts a national reckoning over systemic racism in police departments and outcry over violent police tactics.

“Reducing crime and raising standards are not opposite goals. They are not mutually exclusive. They work together,” Trump said. “They all work together.”

Trump did not address the racism issue directly on Tuesday. Instead, he suggested the problem rested on a small number of individual officers.

“They’re very tiny. I use the word tiny,” he said. “It’s a very small percentage. But nobody wants to get rid of them more than the really good and great police officers.”

Trump said he was taking executive action to encourage police to adopt the “highest and the strongest” professional standards, even as he lambasted efforts to defund departments and said police were owed respect for their work.

The President said he was signing the order “to deliver a future of safety and security for Americans of every race, religion, color and creed.”

But at the same time, Trump said Americans “demand law and order” and hailed the efforts of law enforcement to quell violence during protests against police brutality earlier this month.

“Without police, there is chaos,” Trump said.

Later, Trump veered from a speech about police reform to launch political attacks, falsely claiming that his predecessor Barack Obama, along with his current election rival former Vice President Joe Biden, did not attempt to address police reform issues when they were in office.

And he delved into recent stock market rallies and an increase in retail sales as evidence, he claimed, that the economy is restarting after being frozen during the coronavirus pandemic.

While Trump said he met with the families of people who lost loved ones to police violence and other instances of racial profiling earlier in the day, they did not accompany him in the Rose Garden. Instead, his audience was made up of representatives from law enforcement and police unions.

“These are incredible people … and it’s so sad,” Trump said. “We are one nation. We grieve together. And we heal together. I can never imagine your pain or the depth of your anguish, but I can promise to fight for justice for all of our people. And I gave a commitment to all of those families today.”

The order, which also sets financial incentives for police departments to establish credentialing programs and follow standard “best practices,” is a modest attempt by Trump to confront a national reckoning over racial inequities and law enforcement.

After adopting a hardline “law and order” stance amid a national outpouring of anger following the death of George Floyd, an unarmed black man who died after a white police officer knelt on his neck in Minneapolis, Trump has been encouraged by advisers to address issues of excessive police force.

At the same time, he has been cautious about alienating police officers and law enforcement officials, who he believes are among his strongest supporters.

The competing interests led ultimately to Tuesday’s executive order, which is the result of an effort led by Ja’Ron Smith, a deputy assistant to the President, and Trump’s son-in-law and senior adviser Jared Kushner. Smith and Kushner sought out police reform proposals from criminal justice reform advocates and law enforcement groups in the wake of Floyd’s killing.

Trump himself was not heavily involved in drafting the order, people familiar with the matter said. He and some of his top advisers have failed to acknowledge the role of systemic racism in police departments.

The order is relatively muted when it comes to sweeping police reforms that have been discussed by members of both parties recently. It will not restrict funding to police departments that don’t meet federal standards, and Trump has repeatedly decried the “defund police” rallying cry.

He repeated those criticisms on Tuesday, saying Americans believe “we must support the brave men and women in blue who police our streets and keep us safe.”

Democrats and Republicans on Capitol Hill are working to advance two competing bills, with the Democratic legislation going further in several respects by banning chokeholds and no-knock warrants.

How quickly the Republican-led Senate moves to pass Scott’s bill remains to be seen, and will largely depend on Majority Leader Mitch McConnell.

McConnell would not say Tuesday whether he would try to bring up the emerging police reform bill to the floor for a vote before the two-week Fourth of July recess.