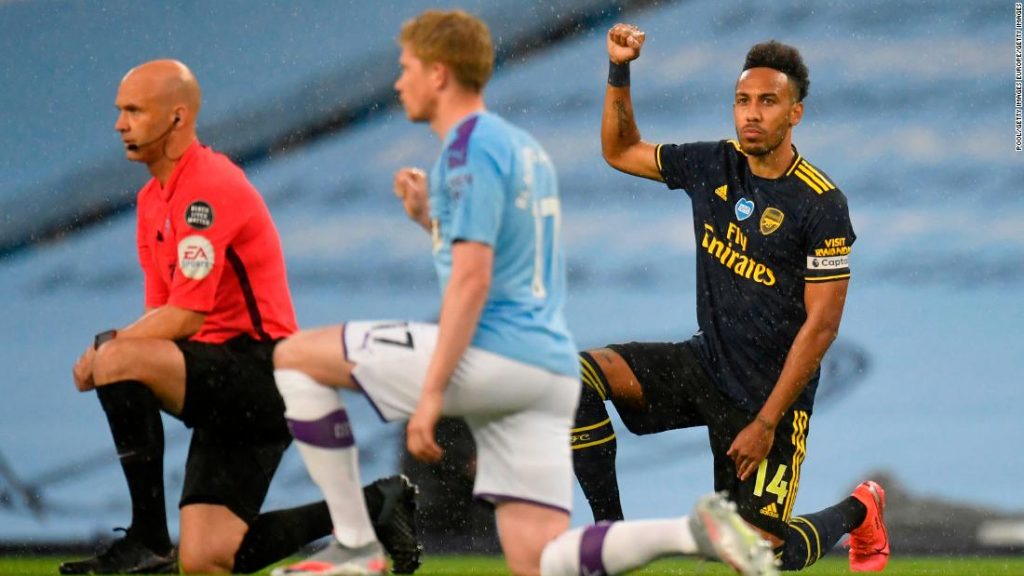 The headline act on the day the Premier League returned after a 100-day absence was supposed to be Manchester City’s blockbuster encounter against Arsenal, featuring some of the finest players in world football.

But the most memorable moment of action in both games — Aston Villa and Sheffield United literally got things rolling earlier in the day — took place before a ball was kicked in anger.

Refereeing officials and coaching members of staff of the four teams involved in Wednesday’s games also took a knee, while all the players wore shirts with their names replaced by the words “Black Lives Matter,” a tribute to the movement which has grown in prominence since George Floyd’s death.

On Tuesday, City and England star Raheem Sterling contributed to a short video with other major football stars explaining how they are “tired” about the manner in which black people are treated and represented.
READ: Premier League returns after 100-day hiatus
“Love that choreographed tribute,” tweeted CNN contributor Darren Lewis, in reference to when the players of Villa and United took a knee .

“All players, including referee Michael Oliver, kneeling for a Black Lives Matter tribute at the moment the eyes of the world are on the game after kick-off. Brilliant.”

Both games, which were played without fans, were also preceded by a minute’s silence in memory of those who have died due to the coronavirus pandemic.

“The Premier League will be returning and the world will be watching,” added Dowden. “This is hugely symbolic. It’s a boost for our football-loving nation. We need fans to play their part too, watching from home. To keep the home advantage, support from home.”

READ: The gifted soccer star who became a remarkable activist

If the game between Villa and United ended goalless it nonetheless delivered one of the 2019/2020 season’s more surreal moments — indeed in Premier League history.

United’s Oliver Norwood crossed a fairly innocuous ball into the penalty box but as Villa goalkeeper Oerjan Haaskjold Nyland backpedaled, he appeared to step over his line holding the ball, due in large part to teammate Keinan Davis nudging him.

However referee Michael Oliver’s watch failed to buzz and signify that the entire ball had crossed the line — which subsequent TV replays seemed to indicate had clearly happened.

According to Hawk-Eye Innovations — the developer of the goal-line technology system — Oliver didn’t receive a signal to his watch due to “significant” occlusion.

“The seven cameras located in the stands around the goal area were significantly occluded by the goalkeeper, defender, and goalpost.” said the Hawk-Eye Innovations statement.

“This level of occlusion has never been seen before in over 9,000 matches that the Hawk-Eye Goal Line Technology system has been in operation.”

READ: Manuel Neuer reveals what it’s like to play in football’s ‘ghost games’

At the Etihad Stadium in Manchester, as well as taking a knee, Arsenal striker Pierre-Emerick Aubameyang also raised his fist as the Gabon international paid homage to a symbol of black protest and liberation.

Notably, Olympic medal winners John Carlos and Tommie Smith raised their fists on the podium at the 1968 Olympic Games in Mexico City during the US national anthem.

The gesture has been adopted many times since, and many have raised their fists during the Black Lives Matter protests in the aftermath of Floyd’s death.

Technology did not get in the way of a rather more engrossing game at the Etihad Stadium as second-place City emerged 3-0 winners — against the backdrop of a Manchester downpour — thanks to goals from Sterling, Kevin de Bruyne and Phil Foden.

Arsenal defender David Luiz, who came on as a first-half substitute, was at fault for two of those goals and the Brazilian’s miserable evening was brought to an early conclusion after he was red carded for conceding the penalty that led to the home side’s second.

Foden’s goal came in stoppage time, with 11 minutes added after Eric Garcia had to be stretchered off following a horrific collision with teammate Emerson.

The win means City is now 22 points behind leader Liverpool, with the Reds on the verge of winning a first ever Premier League title. Liverpool last won a top-flight crown 30 years ago, in the old first division.

So it’s two games down, 90 to go. Before Liverpool take to the field in the Merseyside derby at Everton on Sunday, the two teams linked by the provocative, pugnacious manager Jose Mourinho — Tottenham Hotspur and Manchester United — face off on Friday.