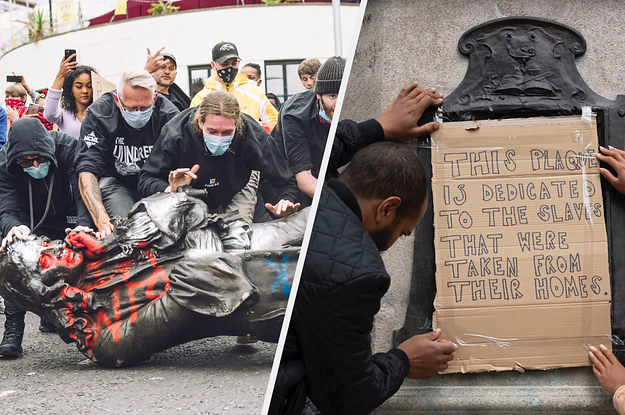 In the US, UK, and elsewhere, public monuments commemorating people with backgrounds linked to slavery and racism are being toppled by angry demonstrators.

Monuments and statues in the US and around the world that are dedicated to controversial historical figures with legacies of slavery and racism have become the target of demonstrations during the #BlackLivesMatter protests.

In several cases, the statues have even been toppled by activists taking matters into their own hands.

At a demonstration in Richmond, Virginia, on Tuesday night, a 93-year-old statue of Christopher Columbus was brought down, set on fire, and thrown into a lake as bystanders chanted “Tear it down.” Left in place where the statue had previously stood was a cardboard sign with the words “Columbus Represents Genocide.”

In Boston, police have launched an investigation and are appealing for information after another Columbus statue was beheaded early on Wednesday morning. The same statue was beheaded back in 2006. In 2015, it was also covered with red paint and spray painted with the words “Black Lives Matter.”

In Montgomery, Alabama, a statue honoring Confederate Gen. Robert E. Lee was toppled outside a high school last week. Now, local officials are considering whether to rename schools in the county named for Confederate heroes.

It’s not just the US that is seeing a reckoning for such monuments.

In Belgium, a statue of colonial King Leopold II was removed from the city of Antwerp after being defaced by anti-racist protesters. During the leader’s reign over the Congo, an estimated 10–15 million people died.

In Barbados, activists have coordinated a petition to have a statue of Adm. Horatio Nelson removed from its capital, calling its presence “an affront” to the Black population.

And in the UK, a monument in honor of Edward Colston, a famed slave trader, was forcibly removed by protesters before being thrown into Bristol Harbour. The demonstration followed years of campaigning to have his statue taken down.

Colston’s company transported more than 100,000 enslaved men, women, and children from West Africa to the Caribbean and the Americas between 1672 and 1689. At least 20,000 died during the crossings due to conditions on the boats — their bodies thrown overboard.

Katie Finnegan-Clarke, who has been working as part of Countering Colston, a pressure group created to have Colston’s presence across Bristol removed, told BuzzFeed News that activists had been trying for almost 100 years to get the statue removed.

“For as long as the statue has been up, there’s been resistance to it,” she said.

“I think I can probably speak for everyone to say we’re all absolutely elated that it got taken down, because I don’t think it would have happened any other way,” she added.

In London, a statue of Robert Milligan, a prominent British slave trader who owned two sugar plantations and enslaved more than 500 people in Jamaica, was removed by city officials on Tuesday. London Mayor Sadiq Khan is now calling for a review of similar monuments across the capital.

“It is an uncomfortable truth that our nation and city owes a large part of its wealth to its role in the slave trade, and while this is reflected in our public realm, the contribution of many of our communities to life in our capital has been willfully ignored,” Khan said.

Activists behind the UK’s Stop Trump Coalition have created an interactive map allowing website visitors to identify and add monuments around the country with connections to slavery and racism.

In a press release, the group said that they were inspired by the protesters who removed Colston’s statue and wanted remaining monuments to be removed “so that Britain can finally face the truth about its past — and how it shapes our present.”

Simukai Chigudu, an associate professor of African Politics at the University of Oxford, told BuzzFeed News that this moment of protest and removal of so many monuments worldwide is “quite a radical shift” in public thinking.

He believes it is being spurred on “partly because of the circumstances that has energized the current public reckoning.”

“The spectacle of George Floyd’s death that we’ve witnessed and have been shocked and repulsed by the world over, I think, ignited a moment of collective trauma and collective rage amongst Black people in many parts of the world,” Chigudu said.

Chigudu has been campaigning for the removal of a statue of imperialist Cecil Rhodes at Oxford since his days as a student there in 2015. The movement took its lead from a South African campaign where students successfully removed a Rhodes monument from the University of Cape Town.

However, the movement to rid cities of such monuments is not without its detractors. Some believe the statues are an important reminder of history, while others object to the violent toppling of such monuments without a public vote.

The removal of Colston’s statue in Bristol was criticized by some British politicians, including by Prime Minister Boris Johnson, whose office described it as an “act of criminal damage.”

But as the protests continue, another prominent statue is emerging as a point of contention between BLM protesters and right-wing figures in the UK: that of Britain’s wartime prime minister, Winston Churchill.

Over the weekend, a Churchill monument in London was vandalized with graffiti labeling the former prime minister a racist.

Despite his popularity for leading the British during World War II, critics have highlighted Churchill’s documented support of eugenics and his role in the 1943 Bengal famine, which resulted in the death of 3 million Indians from starvation.

In an online address, right-wing figure Stephen Yaxley-Lennon, also known as Tommy Robinson, claimed without evidence that far-left organizations like antifa were funding BLM and accused the protesters of damaging race relations in the UK. Robinson issued an open invitation calling on “patriots” to attend upcoming protests in London this weekend and be prepared to defend and protect Churchill’s monument.

Chigudu believes the debate around Churchill could lead to a new culture war in Britain, as “there’s no one as powerful as Churchill in the British national imaginary.”

“I think a real risk is it unleashes the forces of the far right even further and we see an extension of a new iteration of these kinds of ‘culture wars’ that have been taking place, with the far right mobilized, and I think that could potentially be quite damaging,” said Chigudu. “I’m really hoping that it doesn’t come to that because those people just have no place in any of these discussions whatsoever.”

Chigudu said he thinks the focus on statues in the current protests is fascinating and revealing because the monuments “memorialize a particular version of the past” — one which is open to change.

“The meaning of a statue is not set in stone; it’s subjected to constant collective reappraisal as history unfolds,” he said.

“These people no longer have pride of place within our sights. Put them in museums. Have people learn about it that way, but let’s have a more honest account of what history is,” said Chigudu.