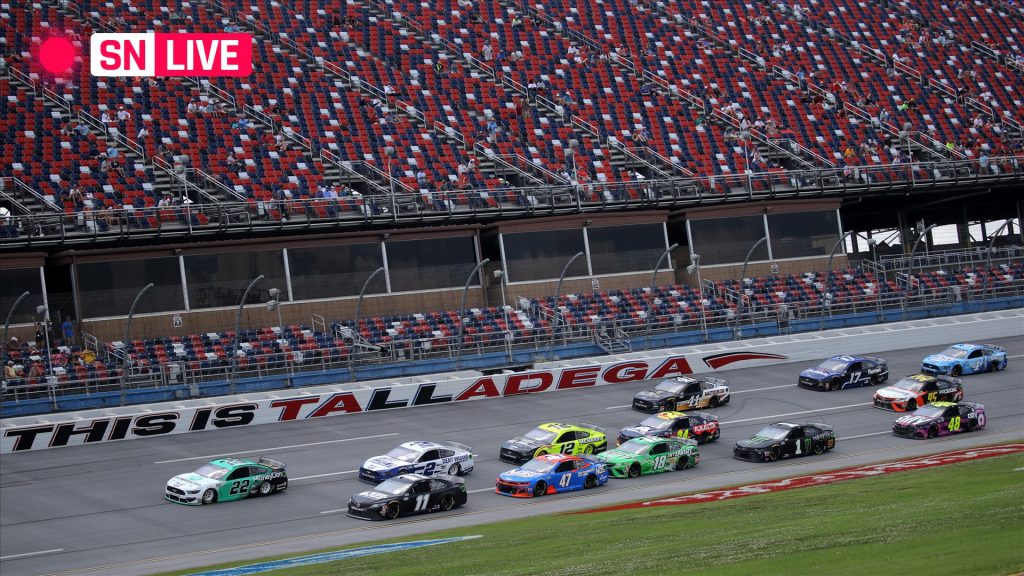 Ryan Blaney claimed the Geico 500 at Talladega on Monday afternoon in dramatic fashion, crossing the finish line as a crash occured behind him in overtime.

There were 19 different leaders and 56 lead changes in the NASCAR Cup Series race.

Bubba Wallace, the black driver who had a noose found in his stall on Sunday, was one of the frontrunners and ran as high as third in the final 20 laps before dropping back to 14th due to a fuel shortage.

Sporting News tracked live lap-by-lap updates and highlights from Monday’s NASCAR race at Talladega. Follow below for complete results from the Geico 500.

NASCAR at Talladega highlights from Geico 500

7:50 p.m.: RYAN BLANEY WINS IT. There was a wreck behind him but the flag stayed green.

OVERTIME coming up at Talladega.

Wow, needed that as Jerry Baxter had told @BubbaWallace he could not make it on fuel to the 🏁

7:37 p.m.: A storybook finish looks like it’s not going to happen here for Wallace.

Bubba is going to cycle his fuel switch and is told if it sputters, he needs to pit.

7:26 p.m.: Alex Bowman is the leader with 20 laps left. Tyler Reddick and Logano are right behind him.

7:24 p.m.: Logano is being told to conserve fuel down the stretch.

7 p.m.: Another caution comes shortly after the restart.

6:45 p.m.: Chase Elliott crashes and the yellow flag comes out. He was running in fourth place.

He spun getting a push from Keselowski into Logano. Austin Dillon got damage in it.

“Something broke, I don’t have any brakes.” –Matt Kenseth

6:19 p.m.: Weather delays aside, this has been a fun race so far. A whopping 37 lead changes and plenty of nimble maneuvers.

6:11 p.m.: The front of the field is ordered as follows: Blaney, Keselowski, Logano, Stenhouse Jr. and Kyle Busch.

5:59 p.m.: Halfway through the race. That means the result will count, even if every lap isn’t completed.

5:56 p.m.: As we approach the crucial Lap 94, the forecast is improving. It’s possible a full race is in the cards.

Radio chatter: “I think we’re good on weather for a little bit.”

5:14 p.m.: NASCAR is going to give this a go, even though more rain is projected soon.

NASCAR is going to finish out Stage 1 under caution. Tyler Reddick wins his first career stage in the Cup Series.

Others getting stage points:

NASCAR will finish the stage under caution. Reddick wins it.
They will finish drying the track and go back to green ASAP.

Drives have loaded back into their cars at Talladega | #NASCAR

UPDATE: Drivers have been instructed to return to their cars at 5:05 PM ET.

5:02 p.m.: If this is called off, they would start from scratch tomorrow.

4:43 p.m.: Here’s how the pre-race act of solidarity came together.

4:18 p.m.: Hamlin got a flat tire just before the caution and will lose a lap.

4:15 p.m.: Caution for weather. We were just five laps away from the end of Stage 1. Still 38 laps from being an official race.

About 30 to 40 minutes before it rains, teams are saying.

3:45 p.m.: Pre-planned competition caution is put into effect. Logano is the current leader.

3:24 p.m.: Weather remains a concern. Here’s the target for the race to count.

Gotta get to lap 94 today to be official

3 p.m.: Really cool image from before the start of the race.

2:40 p.m.: Lots of powerful support for Bubba Wallace from other drivers today.

The 3 p.m. ET start time for the Talladega race is the second such start time for the Cup Series since it returned to racing last month, with the June 7 race at Atlanta being the other. The July 19 race at Texans and the Aug. 2 race at New Hampshire are the other two events currently confirmed on the NASCAR Cup Series schedule that will start at 3 p.m. ET.