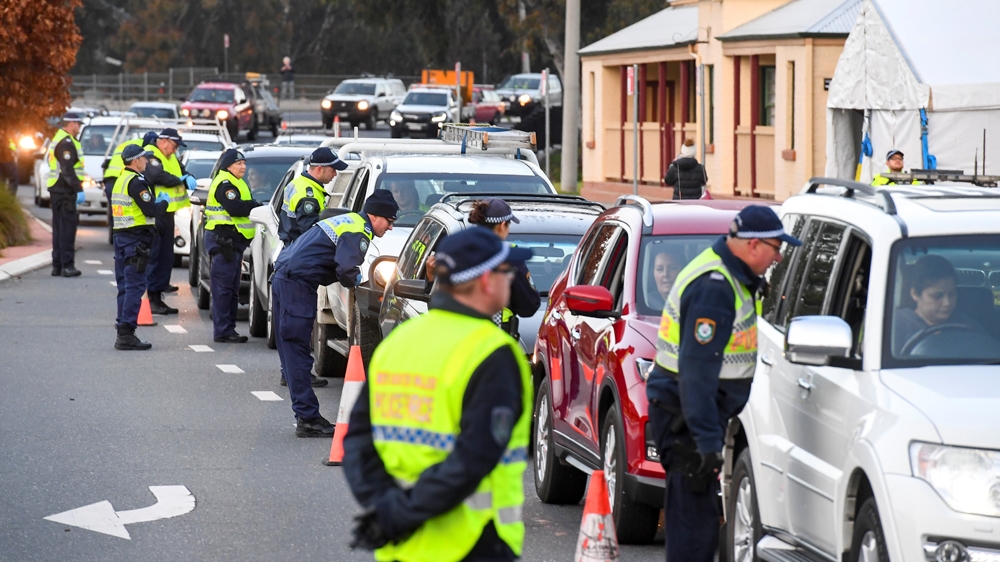 Nearly 11.8 million people around the world have been diagnosed with COVID-19, and more than 542,000 have died, according to data compiled by Johns Hopkins University. The US and Brazil have reported the most cases and the highest death tolls.

Panic buying has hit supermarkets in Melbourne and Victoria again, ahead of the six-week lockdown that comes into force in a few hours time.

There is absolutely no need to rush out to the supermarket.https://t.co/kFonAZbgVD

Australia’s coronavirus emergency cabinet is to consider limiting the number of citizens and residents allowed to return to the country, following a spike in cases in Melbourne.

Health authorities say many of the cases have been traced back to hotels where people who had returned from overseas were being quarantined.

Prime Minister Scott Morrison says there are no plans to reimpose coronavirus restrictions across the country after the Melbourne outbreak prompted the closure of state borders and a citywide lockdown.

Many are asking where the lockdown areas end. See map below.

This is to #FlattenTheCurve once more, here in Victoria.

Scientists at University College London are warning of the risk of brain damage from coronavirus.

UCL researchers studied 43 patients who suffered either temporary brain dysfunction, stroke, nerve damage or other serious effects on their brain, and say the disease can lead to severe neurological complications including psychosis and delirium.

The study found nine of the patients were diagnosed with a rare condition called acute disseminated encephalomyelitis (ADEM), which is usually seen in children and can be triggered by viral infections.

The team said they would only usually see about one adult patient with ADEM a month, but it had risen to a “concerning” one a week while they were conducting the study.

“Given the disease has only been around for a matter of months, we might not yet know what long-term danage COVID-19 can cause,” said Ross Paterson, who co-led the study. “Doctors need to be aware of possible neurological effects, as early diagnosis can improve patient outcomes.”

A human brain, part of a collection of more than 3,000 brains that could provide insight into psychiatric illnesses, at a psychiatric hospital in Duffel, Belgium [File: Yves Herman/Reuters]

The UK government is to announce a mini-budget later on Wednesday to kickstart the economy after the prolonged coronavirus lockdown.

Chancellor Rishi Sunak will announce the plan – with a focus on infrastructure spending – at 11:30 GMT. He’s expected to offer 2 billion pounds ($2.5 billion) in grants for households to improve home insulation, while 1 billion pounds ($1.25 billion) will be available for public buildings including hospitals.

New Zealand is to prosecute a 32-year-old man who briefly absconded from an isolation facility after testing positive for the virus.

The man was in quarantine in Auckland after arriving from Delhi on July 3. He escaped through a fenced area of the hotel and and visited a supermarket before returning to the facility.

“We take any breach of the COVID-19 rules very seriously,” said Commodore Darryn Webb, the head of managed isolation and quarantine. “Willfully leaving our facilities will not be tolerated, and the appropriate action will be taken.”

The US state of California has reported a record daily rise in confirmed cases of coronavirus – some 10,201 cases.

The state has taken steps to curb the outbreak by suspending indoor activities and training contact tracers.

Other states have also reported record daily numbers of cases including Hawaii, Missouri, Montana, Oklahoma and Texas, with the number of known cases across the US now approaching three million.

The Australian state of Victoria has confirmed 134 new cases of coronavirus, with Melbourne due to begin a six-week lockdown at midnight (14:00 GMT).

Around 4.9 million people in the country’s second-biggest city will be confined to their homes for all but essential activities.

READ  Working in Toronto: How to Make Your Stay Easy and Comfortable