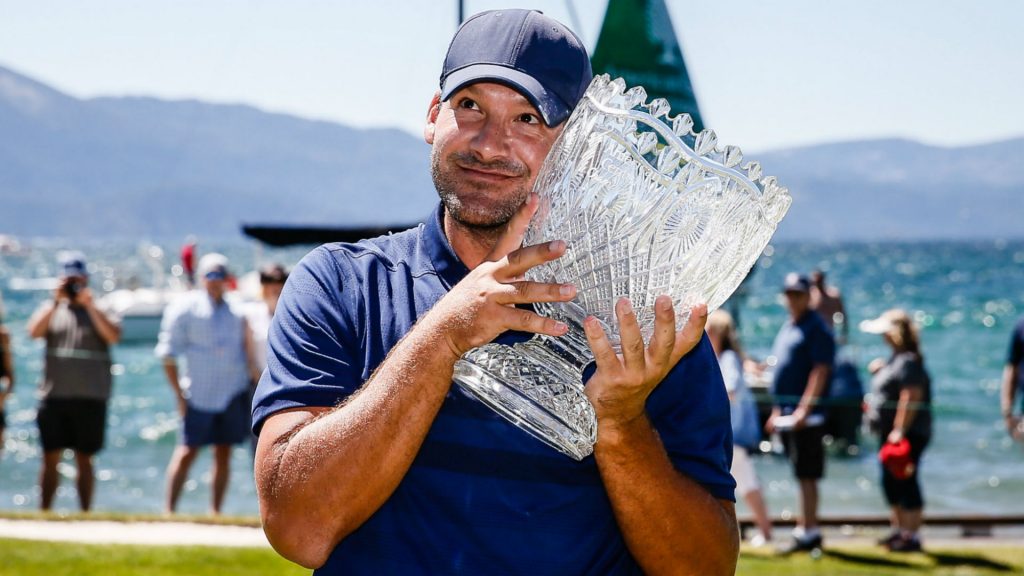 What is there to do when you are a bored celebrity in the middle of a pandemic? Play golf for a good cause — social distanced, of course.

That is the 2020 American Century Championship in a nutshell as a who’s who of current and former athletes, actors and other famous faces head to Edgewood Tahoe Golf Course overlooking Lake Tahoe for the annual celebrity golf tournament. NBC is broadcasting all three rounds of the event live.

The 72-player field in 2020 includes everyone from NFL quarterbacks Patrick Mahomes and Aaron Rodgers to NBA MVP Stephen Curry and his dad, Dell, plus entertainment personalities Ray Romano, Miles Teller and Larry the Cable Guy, among others.

Former NFL quarterback and CBS analyst Tony Romo is also back to defend his titles after winning the tournament in consecutive years. Romo, who dabbles in PGA Tour tournaments on occasion, is a mainstay at the ACC, finishing in the top five in each of his seven appearances.

Here’s everything to know about the 2020 American Century Championship, including a list of tee times (updated daily), the complete TV schedule, player list, betting odds and more.

Live TV coverage of the 2020 American Century Championship begins Friday from 5-8 p.m. ET on NBC Sports. Rounds 2-3 on Saturday and Sunday will be broadcast on NBC with coverage scheduled to start at 3 p.m. ET each day. All three rounds will re-air on the Golf Channel at 10 p.m. ET following the original broadcasts.

The tournament can be live-streamed via NBCSports.com as well as fuboTV, which offers a free seven-day trial.

The list of players for the American Century Championship features 72 current or retired athletes, broadcasters and entertainers, including 32 from the NFL, five from the NBA, 12 from MLB, two boxers, two tennis stars and a world long drive competitor.

Here is the complete list of tee times and pairings for Friday’s Round 1 at the American Century Championship. All times are Eastern.

Tony Romo is the betting favorite to win the American Century Championship tournament for a third year in a row, according to odds via Sports Insider.

READ  "No one stood," according to Ducharm.

An estimated $600,000 in prize money will be donated to charities supporting social justice reform and COVID-19 relief efforts, according to tournament organizers.

The American Century Championship follows a modified Stableford format, which awards points based on stroke totals for each hole. The player with the highest point total after three rounds (54 holes) is the winner.

Here is the scoring breakdown:

Here are the winners of the 10 most recent American Century Championship tournaments between 2010 and 2019.