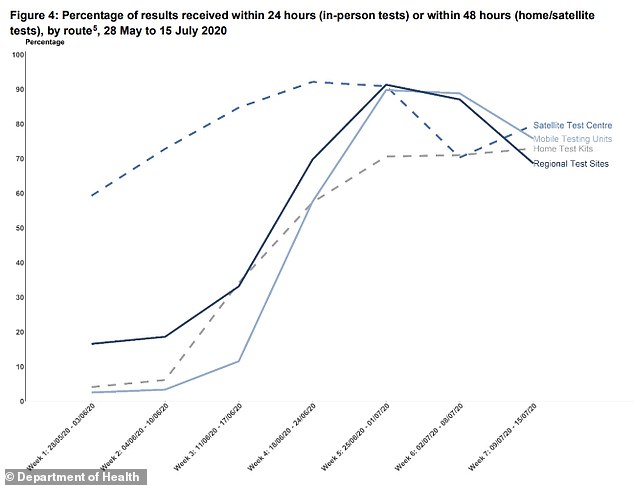 Waiting times for coronavirus swab test results have surged in the past week and now one in three people at drive-through centres have to wait more than 24 hours.

Damning statistics today published by the Department of Health show NHS Test and Trace is failing on one of its most important measures – testing people quickly.

Prime Minister Boris Johnson had promised that all tests would be delivered within 24 hours of someone taking a test, but the service has again missed the target.

Between July 9 and July 15, the proportion of people getting their results within a day was 46.8 per cent, down from 50.6 per cent between July 2 and July 8.

The fast turnaround rate plummeted for the regional drive-through centres, where only 68.6 per cent of people got their results within 24 hours, compared to 87.1 per cent a week earlier.

The 24-hour completion rate fell in every other category of testing except home tests, where is has been dismally low since the start. It this week rose slightly to 6.2 per cent from 3.3 per cent.

Today’s data also showed that the contact tracing element of Test and Trace is still struggling, although there are slight improvements.

Call handlers are still failing to reach almost a quarter of close contacts of positive Covid-19 cases to tell them to self isolate.

Prime Minister Boris Johnson pledged that everyone in Britain would get their Covid-19 test results within 24 hours by the end of June.

But he failed to reach that target with test turnaround times at a dismal level week-on-week, and are now getting worse.

The latest data shows across all testing routes, 46.8 per cent of tests are turned around in 24 hours, down on the 50.6 per cent in the week before.

Since the test and trace system launched at the end of May, almost 70 per cent of people who are tested for Covid-19 in Pillar 2 — which is everyone tested outside a hospital — waited more than 24 hours for their result.

It means just 30 per cent are getting their result test back in the target time against the 100 per cent set by the PM.

At regional testing centres — like drive-through centres — almost a third (31.4 per cent) of people had to wait more than 24 hours for their result between July 9 and July 15.

The majority of tests are undertaken at regional testing centres, which are booked through the NHS website when a member of the public gets symptoms.

The number of people waiting more than a day for a test result doubled if they went to a mobile testing unit — which travel around the UK to test essential workers at sites including care homes, police stations and prisons.

A quarter of tests took more than a day to turnaround, an increase on the 12.2 per cent the week before.

Return rates were significantly lower for the small testing operations at satellite test centres, which are pop-up sites in places like car parks where cases are high. 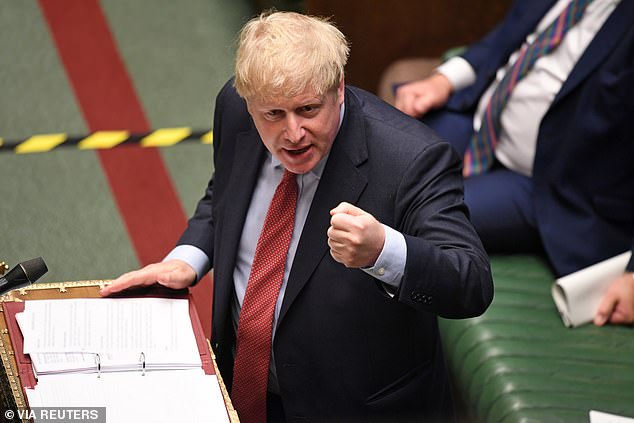 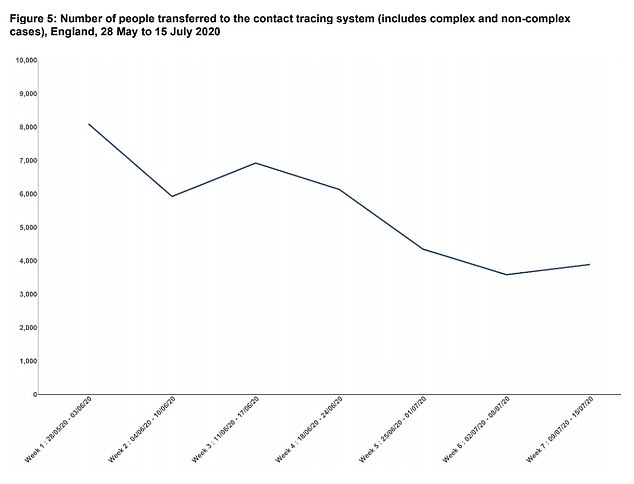 Figures show the success of the NHS Test and Trace system is increasing in its seventh week after a slow start. Between 09 July and 15 July, 3,887 people were transferred to the contract tracing system, which has been reducing due to less people testing positive for Covid-19 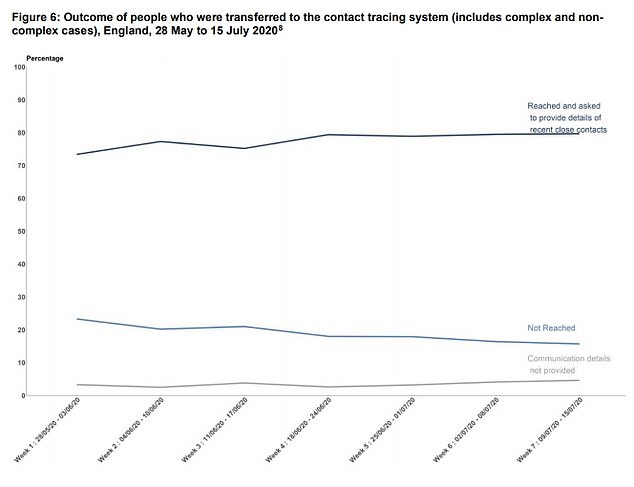 More people who have had a positive Covid-19 test result are being reached by the service with speed. Complex cases refer to those who are handled by local health teams in response to a local outbreak. Non-complex are those dealt with by wider call centres

NHS Test and Trace is still failing to track down up to half of Covid-19 patients’ contacts in areas most at risk of local lockdowns, it emerged last night.

In Luton, which has the fifth highest infection rate in England, just 47 per cent of potentially-infected people were contacted by the system since its launch on May 28, according to analysis by The Guardian.

Only 65 per cent of close contacts in Leicester – which had to retreat back into lockdown last month after a spike in cases – were tracked down by tracers.

It means 3,340 people who may have had the disease in the city slipped under the radar and could have spread it further through the population.

Language barriers may partly explain the low success rates in some of the worst-hit areas, where the virus is disproportionately affecting people of south Asian heritage.

In Luton, for example, 20 per cent of the population do not speak English as their first language, along with 27.5 per cent in Leicester, which has the highest rate in the country. In Blackburn it is 13.4 per cent, according to Statista.

Other potential explanations include a distrust of unknown callers, missed emails or people outright refusing to hand over contact details.

Local councilors and public health officials are now demanding more control over the test and trace process on the back of the ‘very concerning’ figures.

They say devolving power to local authorities could allow them to do door-to-door visits if contacts cannot be reached by other means.

Just 9.8 per cent of people in England who were tested at one of these sites had their result in 24 hours in the week up until July 15 compared with 20.8 per cent the week before.

For home tests, which are posted out to people’s homes, a dismal 6.2 per cent produced a result within 24 hours, which is an improvement on the shockingly low 1.8 per cent at the start of July.

Experts say getting test results fast and carrying out contact tracing immediately is vital to stopping the spread of coronavirus because there is only a short window to alert people that they are at risk of infecting others without yet knowing they’re ill.

The turnaround time for Pillar 1 testing is better, and includes swabs conducted in hospitals. Some 87.4 per cent had their result within 24 hours.

In other news, figures show the success of the NHS Test and Trace system is increasing in its seventh week after a slow start.

More people who have had a positive Covid-19 test result are being reached by the service with speed, and they are providing more details of their close contacts.

Statistics covering July 9 to July 15 show 79.7 per cent of those who had a positive test result were successfully reached by NHS Test and Trace.

Call handlers phone people who are entered into the system as a ‘positive Covid-19 case’ and interview them about who they been in contact with.

The majority (79.9 per cent) who picked up the phone disclosed details for one or more friend or relative, which has increased from 77.5 per cent the week before.

Of the 16,742 people identified as a close contact, 13,034 people (77.9 per cent) answered the phone, an increase from 72 per cent the previous week. These people were told to self-isolate in order to stop the coronavirus spreading further.

The odds of stopping severe Covid-19 outbreaks in the UK relies heavily on a robust contact tracing system, scientists say.

Since its launch in the UK, 77.1 per cent of people with a positive test case have been called by the NHS for an interview.

But scientists have repeatedly warned contact tracing systems need to catch and isolate 80 per cent of potential Covid-19 patients to keep the epidemic squashed.

It means the Government is still to hit the bare minimum target, despite launching the programme on May 28.

There are also thousands of Covid-19 cases in the UK who will never be picked up by the contact tracing system because they don’t have symptoms, therefore don’t get a test.

It follows data last night which revealed NHS Test and Trace is still failing to track down up to half of Covid-19 patients’ contacts in areas most at risk of local lockdowns.

The data, obtained by the Guardian, looked at contact tracing results from between May 28 and June 17.

It revealed thousands more potential patients in other areas of England with rising infections were being missed by the system.