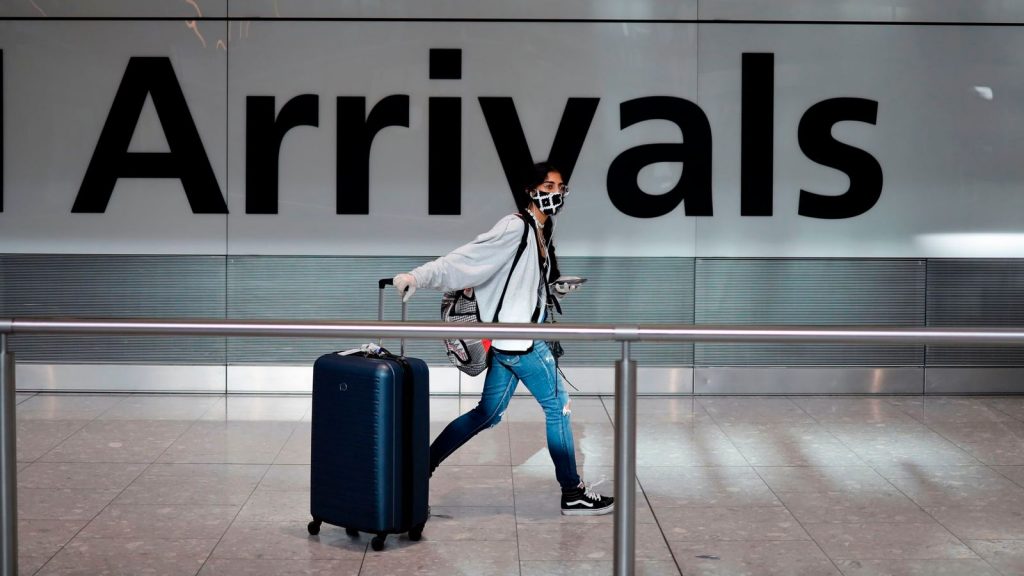 The UK has said it will not hesitate to require more people arriving from countries with steeply rising coronavirus rates to quarantine, after it imposed restrictions on those coming from Spain.

But what about other European holiday destinations? The data show that coronavirus infection rates are currently rising in many European countries.

While case rates in many countries are low, European Centre for Disease Prevention and Control (ECDC) figures show the numbers testing positive in many of them are going up.

While we don’t know exactly what threshold the government required in order to impose its quarantine measures, the picture in Spain shows why they had to act.

Spain has a relatively high rate at present – one of the highest in Europe, with 39.4 cases per 100,000 population occurring in the last fortnight.

But the number of people testing positive has also rocketed, with the rate of infection rising from 11/100,000 in the two weeks to 12 July.

That has meant 260% more people have tested positive in the last fortnight compared with the previous two weeks.

Currently, none of the major holiday destinations are experiencing similar rises in rates.

But there are places in Europe, including those which have had travel restrictions removed by the Foreign Office (FCO), which are seeing rapidly rising rates.

Most notable is Luxembourg – a country that sits in between its much bigger neighbours France, Germany and Belgium, but has a relatively small population. Yet, it is exempt from the FCO advice to avoid all but essential travel.

The Balkans are also seeing rates surge, with Montenegro particularly hard hit – but the FCO currently advises against all but essential travel to the Adriatic coast country.

Other Balkan countries, most of which are not exempt from the advice on all but essential travel, also have high rates.

There is always the fear that these high rates of infection will cross borders to places that are popular with holidaymakers, like Greece or Croatia.

The FCO still advises against all but essential travel to Sweden and mainland Portugal, because of their previously high rates.

But what the ECDC figures also show, is that rates vary sharply within each country – as they do in the UK.

Even in Spain, many parts have a case rate of lower than 20/100,000, which is lower than the rate in Birmingham or Swindon. It is the Spanish region of Aragon, where rates are now higher than 230/100,000, and to a lesser extent Navarra and Catalonia, that are skewing the national picture of Spain as a whole.

ECDC figures show that there are parts of Hungary, Italy and Norway where no cases have been reported in the last two weeks.

Change in numbers from the previous fortnight: 260%

The foreign secretary said on Sky News on Sunday the government received data on Friday that showed a “big jump” in COVID-19 cases across Spain, prompting it to require all arrivals to the UK to quarantine for two weeks. It changed travel advice for mainland Spain but is yet to do so for the Balearics and the Canaries, both of which have lower levels of infection.

Change in numbers from the previous fortnight: 25%

The UK is said to be looking at France but, so far, the rise in infections has been significantly lower than in Spain, with no regions of the country, according to the ECDC, seeing rates of more than 20/100,000. The two-week rate is exactly the same as the UK’s – 14.6/100,000.

Change in numbers from the previous fortnight: 12%

Rates in Italy had fallen to their lowest levels since the pandemic took off until recently, despite having been the original epicentre of Europe. Italy has taken extra measures to keep infection rates down, including banning people from 16 hard-hit countries.

Change in numbers from the previous fortnight: 48%

Ireland has one of the lowest rates of infection in Europe and recently lifted its 14-day quarantine requirement for people coming from 15 European countries. The rate appears to have increased sharply in the last fortnight, but the low number of cases may skew the figure.

Change in numbers from the previous fortnight: 113%

The Netherlands is seeing rising numbers of infections, but from a fairly low level. The government has also advised its residents against travel to certain parts of Spain, but is yet to require a quarantine for nationwide arrivals.

Change in numbers from the previous fortnight: -3%

Greece has continued to see low rates of infection, which are also falling, despite countries on its northern borders seeing cases spiral.

Change in numbers from the previous fortnight: 21%

Germany, like France, is said to be among the countries the UK government is looking at, but – apart from isolated outbreaks and steadily rising rates from a lowish base – the country currently shows no sign of seeing rapidly rising infections.

Change in numbers from the previous fortnight: -25%

Portugal, which is visited by millions of Britons every year, is the only popular European destination that is currently not exempted from FCO advice against all but essential travel. It has had high rates of infection (in comparison with other European countries) for several months but is seeing infection rates steadily fall. If the direction of travel remains the same, the FCO may include it among those countries exempt from advice against all but essential travel.

Change in numbers from the previous fortnight: 34%

Like many of its central and northeastern European neighbours, Poland was exempted from the FCO’s blanket advice against all but essential travel as it has seen infection rates stay relatively low. But, on Monday, its health ministry said it expects to see a resurgence in the number of new infections in the southern region of Silesia due to outbreaks in mining areas.

Change in numbers from the previous fortnight: -18%

Turkey too has recovered after being quite badly hit early on. It now has relatively low rates, with stringent measures applied by the government appearing to have worked, and rates are continuing to fall.