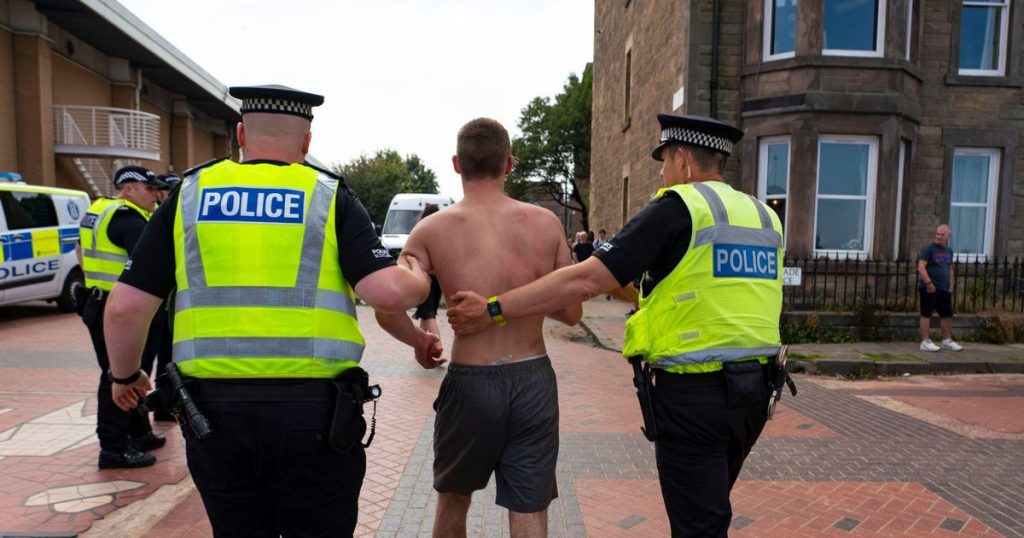 Brawls were reported at beaches across the UK with people arrested and crowds dispersed as things got out of hand on the hottest day of the year.

Problems were reported at Bournemouth, Barry Island in Wales, and at Portobello beach, in Scotland with police called to deal with fights.

Thousands of Brits had flocked to the beach on what was the third hottest UK day on record, with a sweltering 37.8C recorded at Heathrow Airport.

But Public Health England’s Heatwave Plan warned there could be travel disruption for Brits heading for the coast.

In Bournemouth a video showed a woman being escorted away by police and around a dozen people in hi-vis jackets, yards from the pier.

One of the women, who is black and being escorted away by police, yells: “You’re racist!”

“Something’s kicking off on Bournemouth beach, police everywhere,” the eyewitness can be heard saying in the video.

“It was a big fight between two gangs on the beach,” he added.

A spokesperson for Dorset Police said: “Dorset Police received a report at 4.37pm on Friday 31 July 2020 of a fight involving a group of young people in the area of Bournemouth Pier.

“Officers attended and detained two people. A 16-year-old boy and a 16-year-old girl, both from Southampton, were given a section 35 order dispersal notices, requiring them to leave the area.

“Enquiries into the incident are ongoing.”

Meanwhile, police were also called to Portobello beach in Edinburgh after reports of a large disturbance on Friday afternoon.

Officers showed up at the beach with witnesses saying at least 10 police vans and cars arrived to manage the crowds.

Police were seen breaking up large groups of young people and removing alcohol from sunbathers.

The incident came as the First Minister said there had been an increase in Covid-19 infections among people aged 20 to 40.

A Police Scotland spokeswoman said: “We received a report of a large disturbance on Portobello beach in Edinburgh around 3pm on Friday, 31 July, 2020.

“Officers are currently in attendance, there are no reports of any injuries and enquiries are ongoing to establish the circumstances.”

It is understood more than 10 officers still remain on the beach in Edinburgh.

Cars can be seen queuing for up to three miles waiting to get to Barry Island as temperatures reached up to 27° in some parts of Wales on Friday.

Train users also say that rail services are heaving and Transport for Wales has put out an urgent plea asking people only to use trains for essential travel.

It comes a day after police said 20-25,000 people visited the beach at Barry Island in one day.

Welsh First Minister Mark Drakeford announced groups of up to 30 people would be able to meet outdoors from Monday.

Met Office forecaster Simon Partridge said: “This not only makes it the warmest day of the year, it also makes it the third hottest UK day on record.”

Bournemouth, Christchurch and Poole Council said on its ‘beach check’ app that people should avoid it’s beaches because ‘safe social distancing is not possible’.

At Bournemouth more than 100,000 sun worshippers were said to have crammed on to the seven-mile seafront, where temperatures reached 28C.

Car parks at the beauty spot, where thousands were criticised for defying social distancing in June, were full from 10am with 12-mile tailbacks to the beach.

Traffic marshals were also turning motorists and Dorset Police described parts of Bournemouth beach as being “rammed” by 1pm.

In Brighton, the council said it was concerned by visitor numbers and urged people not to travel there, amid concerns over social distancing on public transport.

Pride celebrations which were due to take place in the city this weekend have been moved online.

Elsewhere in Sussex, police announced that popular destination Camber Sands was “full” by 11am.

In a post on social media they wrote: “We kindly ask that you do not travel to Camber today.

“Previously, high volumes of visitors have led to standstill traffic, to the point that emergency services and residents have struggled to enter Camber.

At Chessington Zoo in Surrey, gorillas, monkeys, giraffes and Kuisimance – a dwarf mongoose – were served frozen desserts to keep them cool.

The included vegetables and treats for the Meerkats, with bigger meat-based snacks for the gorillas.

However a storm warning was in place for much of eastern England last night.