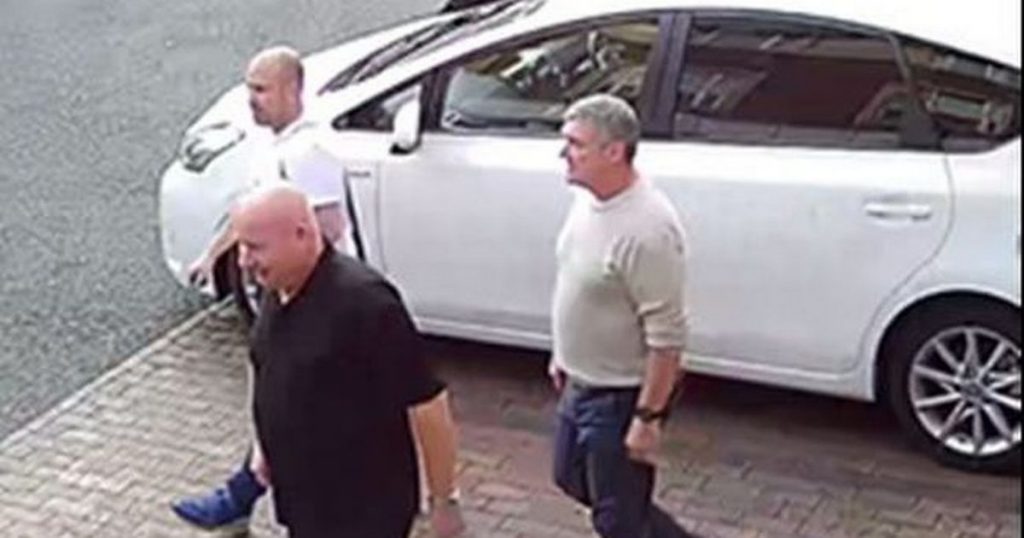 This is the moment three career criminals from Liverpool checked into a hotel on their way to burgle a luxury home in the midlands.

Thomas Mee, John Barlow and Vincent Ball toured the country breaking into the homes of high net worth individuals such as Manchester City ace Raheem Sterling.

Ball was the driver while Mee and Barlow were responsible for the breaking and entering. They often used ladders to gain access to first floor balconies, and then forced open doors which led into the homes.

On one occasion Mee fell from a set of ladders while on a job and injured himself.

Police have now released CCTV stills of the gang arriving at a hotel in the midlands on September 4 2019 ahead of breaking into the home of Mansfield FC chairman John Mansfield.

Barlow and Ball took the lead on this job, and stole around property worth around £114,000 from the home of the football club owner.

Police also released stills of the crooks on a job in Northwich, Cheshire, when they again used ladders to gain access to a roof.

They then broke into the house and stole cash, watches and jewellery from the master bedroom.

But the ‘career criminals’ came unstuck after a break-in at the Cheshire home of Bury FC owner Steve Dale last October.

They dropped nearly £500,000 of watches stolen from the property on Macclesfield Road as they made off.

Police were at the scene within minutes and Ball and Mee were arrested a short time later in Massey Street, Alderley Edge, where officers also discovered a Vauxhall Insignia which the group had used as their getaway car.

Barlow managed to evade officers on the night, dumping of some of his clothing and making his way back to Alderley Edge before travelling back to Liverpool in a taxi in the early hours of the morning.

He was later arrested.

When police later seized Mee’s mobile phone they found pictures of handbags and designer accessories which the Liverpool man had offered for sale.

Recorder of Chester Judge Steven Everett described the three men as ‘career criminals’ as he handed down prison sentences.

Mee was jailed for eight years and seven months, Barlow seven years and six months and Ball six years and nine months
Judge Everett was particularly critical of the role played by Mee as both a burglar and handler of stolen goods.

He accused the Liverpool man of ‘stealing to order’ and of being at the top of the conspiracy.

Judge Everett , when handing down the prison sentences, was sensitive to the effects of the break-ins on the victims.

He said that treasured heirlooms had been pocketed by the gang with scant regard for the victims.

He made particular reference to the raid at the home of Mr Dale, which left the family deeply concerned and troubled.

Enter your postcode for updates on crime where you live

Cheshire police said the three men were part of an ‘organised crime gang’ that targeted the homes of wealthy and famous individuals.

Police said the men all displayed degrees of ‘forensic and digital awareness.’

A spokesman said: “If you have any information about this type of crime in Cheshire you can call Cheshire Constabulary on 101 or Crimestoppers, anonymously, on 0800 555 111.”