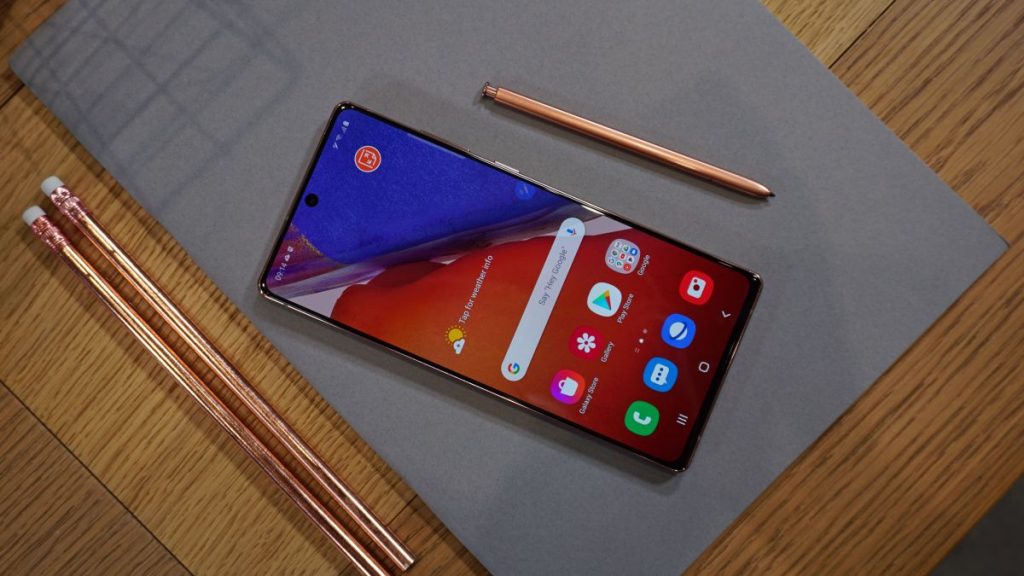 The Samsung Galaxy Note 20 is the junior partner in this year’s Galaxy Note lineup, missing out on a few specs and features compared to the top-end Galaxy Note 20 Ultra that launched alongside it, but coming with a considerably lower price tag.

It’s certainly the case that the entry-level Note certainly doesn’t look as exciting viewed alongside the company’s very best, but if you’re looking for some top performance and nearly the best photos in a slightly more affordable handset than the Note 20 Ultra, this could be the Note for you.

What are you set to get? You may get 5G (there is a 4G variant for some markets), an S Pen stylus and some top power including the latest chipsets that you’ll find on an Android phone.

The Samsung Galaxy Note 20 was unveiled at the company’s virtual Unpacked event alongside the Note 20 Ultra and a variety of other devices on Wednesday, August 5. You can pre-order the handset directly from Samsung in the UK and Australia right now, while US pre-orders go live on at midnight on Thursday, August 6

If you pre-order, you’ll get the phone on Friday, August 21. The company has confirmed that those who pre-order will get a subscription to Xbox Games Pass or a pair of Galaxy Buds Live, but which freebie you get will depend on your region.

If you’ve held a Note phone before, you’ll be familiar with the Galaxy Note 20’s large size and premium-feeling design. This is a gargantuan device with a 6.7-inch display, and the fact that the Galaxy Note 20 Ultra has a slightly larger display doesn’t mean the Note 20 feels small.

The display here sees a couple of surprising downgrades compared with last year’s Galaxy Note 10. For starters, unlike on that phone the screen isn’t curved at the sides, instead sitting flush with the top edges at the left and right.

The other surprise is that the Galaxy Note 20 display only has a standard 60Hz refresh rate display where a lot of other top-end phones – including all three Galaxy S20 phones and the Note 20 Ultra – have been upgraded to 120Hz.

That means the display refreshes quicker on those other handsets, for a smoother experience when you’re gaming or scrolling through your social media feeds. If you haven’t used a 120Hz display before then you won’t notice much of a difference, but it feels like a major omission from Samsung for such a high-priced phone.

The display has a Full HD resolution, which doesn’t look as great as the QHD Galaxy S20 range either, but it’s suitable for watching videos and more. Overall though, the display feels like a disappointment given the strides Samsung has taken recently in making some of the best screen tech you’ll find on a phone.

The design of the handset itself feels suitably premium, with metal edges that are flatter than on previous devices. Those flatter edges mean you really notice the lack of curved display edges, but it’s a design that some may prefer.

You’ve got three color options for the Galaxy Note 20, with Mystic Bronze being the new experimental flagship color. There’s also Mystic Green and a Mystic Grey, but if none of these take your fancy you may find that Samsung releases additional colors in the future, as it’s done in the past.

The S Pen stylus is still housed in the phone’s body, but it’s moved from the right-hand side of the bottom edge to the left side so if you’ve previously owned a Note phone you may find yourself reaching for the stylus on the wrong side out of habit.

The company has improved its S Pen stylus in a number of ways, adding new gestures for interacting with the phone, and improving both the accuracy and the sensitivity of the stylus to make it more useful. Recording audio notes while scribbling down written notes using the S Pen is now handier; it’ll sync what’s being said aloud as you write on the screen, creating what amounts to an interactive handwritten timeline for the audio.

So far we’ve had limited opportunities to try out the camera setup on the Galaxy Note 20, but from our brief hands-on time with the phone, the cameras seem to be every bit as impressive as those on the Galaxy S20 and S20 Plus range.

That main camera isn’t as powerful as the 108MP shooter on the Note 20 Ultra – it’s a similar story with the main cameras on the Galaxy S20 and S20 Ultra –  but it performed well in our limited testing. The few shots we took seemed to be detailed, clear and have solid color saturation that you’d expect from a top-end Samsung.

We’ve yet to properly experiment with the ultra-wide camera, but the 64MP telephoto’s up to 30x zoom for photos worked well in our first round of testing and gave similar results to the Galaxy S20’s similar shooter.

On the front is a 10MP selfie shooter, which we’ve yet to try out. This sits at the top of the display in the center, with the lens concealed in a small pin-hole in the screen, which should make those who aren’t fans of notches happy.

There’s a 4,300mAh battery inside the Note 20, which we’d expect will keep the handset chugging along for a full day – we’ll see how it performs in day-to-day use when we’re able to use the phone over an extended period for our full review.

The Note 20 only features 25W fast charging, rather than topping out at 45W, like the Galaxy S20 Ultra and Note 10 Plus. So while you’ll be able to juice up your phone reasonably quickly, you’re by no means getting the fastest charging tech available. On the plus side, 15W fast wireless charging is supported and wireless power share for reverse wireless charging is here, too.

The Galaxy Note 20 features a top-end chipset: the Qualcomm Snapdragon 865 Plus in the US, and Exynos 990 in the UK and most other markets.

We’ve tested phones with both those chipsets in – the Samsung Galaxy S20 running the Exynos, and the Asus Rog Phone 3 running the Snapdragon – and if our experiences with those handsets are anything to go by you won’t be disappointed by the power on tap here. Both chips are teamed with 8GB of RAM.

You get either 128GB (in the US) or 256GB (in the UK) of storage on the base Note 20 model. That decision appears to be region dependent and not something you can upgrade or downgrade to at time of purchase.

Want super-fast next-generation internet speeds on your next phone? The good news is that the standard Galaxy Note 20 is 5G-enabled, although in some markets, including the UK, you’ll be able to get a 4G-only version if you don’t need 5G and/or want to save some money.

Only the 5G Note 20 will be available in the US, and depending on your carrier, it may pack sub-6 5G (AT&T and T-Mobile), or both sub-6 and the faster mmWave 5G antennas (Verizon and likely the unlocked Note 20 in the US).

The handset is running Google’s Android 10 operating system with Samsung’s own One UI 2.5 overlay on top, so it’ll look similar to your current Samsung phone, and not too dissimilar to stock Android on many other phones.

We’d hope the Note 20 will get the Android 11 update later in the year when the latest version of Google’s software is rolled out, although Samsung isn’t always the fastest at bringing software updates to its devices.

The standard Samsung Galaxy Note is no longer the brand’s top phone. After 2019’s introduction of a Plus model, and this year’s Galaxy Note 20 Ultra, the standard Note 20 isn’t as exciting as some will want but it looks to be a solid option nevertheless.

If you want a Samsung device that comes with the S-Pen stylus, or that large screen, but you don’t want to lay down a huge amount of cash, the Note 20 may be just the phone for you.

If, however, you want the very best Samsung has to offer, and can afford to pay for it, you’ll want to look to the Galaxy Note 20 Ultra or a member of the Galaxy S20 family – we’ll have a better idea when we come to write our full review.