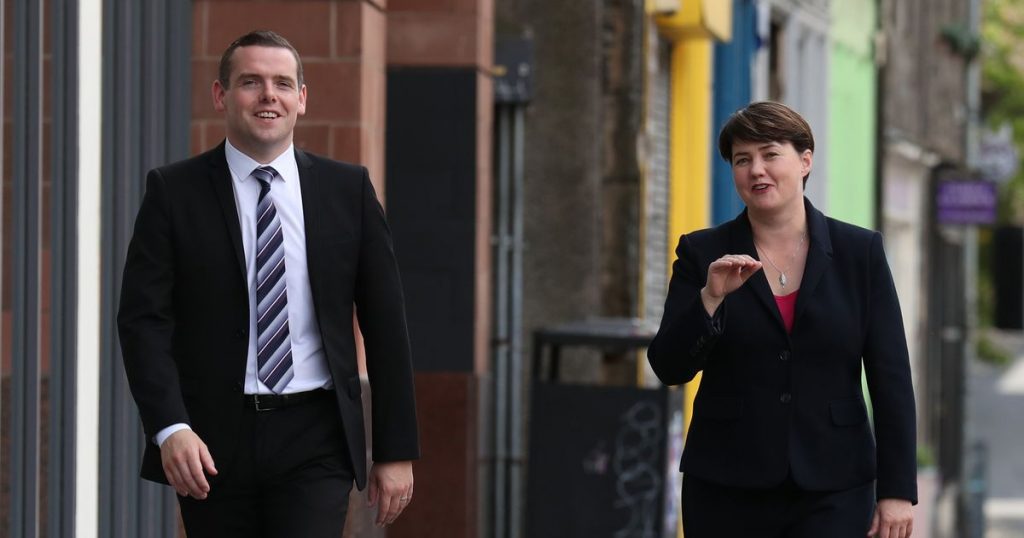 Ruth Davidson is at the centre of claims she plotted to oust Jackson Carlaw as Scottish Tory leader and install Douglas Ross.

The Daily Record can reveal she held a secret meeting with Ross at his house in Moray days before Carlaw quit.

Labour MSP Neil Findlay said: “It looks like Ruth Davidson and Douglas Ross were hatching a plan to do in Jackson Carlaw over tea and crumpets in Moray.

“They should give a full account of what was discussed at this secret meeting.”

Get all the top Scottish politics news sent straight to your Inbox by signing up to our Politics newsletter.

We cover Holyrood, Westminster and local councils, with a current focus on how our governments are handling the coronavirus pandemic.

To sign up, simply enter your email address into the pink box near the top of this article.

Alternatively, you can visit our newsletter sign up-centre. Once you are there, enter your email address and select Politics and any other Daily Record newsletters that are of interest.

Ross, the MP for Moray, secured the Scottish Tory leadership yesterday without facing a contest from a colleague.

One of his key internal commitments was to task ex-leader Ruth Davidson with the role of taking on Nicola Sturgeon at First Minister’s Questions.

He resigned after being presented with dire internal polling, but there has been speculation Davidson’s allies had a role in his departure.

It has now been confirmed the pair met in Moray on Sunday 26th July – four days before before Carlaw quit. Davidson is the MSP for Edinburgh Central.

A spokesman for Davidson said: “Ruth did visit Douglas in Moray in a personal capacity on that date.”

The spokesman declined to offer any details of what was discussed.

Interviewed this week on the BBC, Davidson said of her support for Ross: “He’s a real political talent and he asked me if I would get on board and help him.”

Asked if this was before Carlaw quit, she said: “No, no, after.”

Put to her that Boris Johnson and Michael Gove visiting Ross in the week before Carlaw resigned smelled like a carve up, she told the BBC:

“I don’t know what else to say, apart from Jackson Carlaw resigned, Douglas has put his hat into the ring, I think he is the best person for the job, I’m backing him and doing all I can to help.”

SNP MP Tommy Sheppard said: “It beggars belief to imagine that the leadership of the Scottish Tory party was not discussed. It’s clear Douglas Ross had been lined up before Carlaw resigned.”

After being confirmed as leader, Ross said today: “In taking on this job today, I am applying for another: to champion a post-referendum Scotland where we focus not on the divisions of the past but on rebuilding our country from the brink, restoring our reputation for educational excellence, empowering our regions and remote communities, and providing the decent jobs that everyone can aspire to.

“I am applying to work for anyone and everyone in Scotland who wants that to be the focus of our national debate, who wants to move the country forward, and wants that work to start now.”

However, Ross was accused of making a gaffe within hours of taking over after effectively conceding defeat at the next Holyrood election.

He said: “My 100% commitment is representing the people of Scotland and I can do that effectively, both in Westminster as an MP, and with a strong team at Holyrood, that after the next election when I hope to be returned to Holyrood I hope to lead a strong, united Conservative Party which will provide that scrutiny and opposition to the SNP that we need in Scotland.”