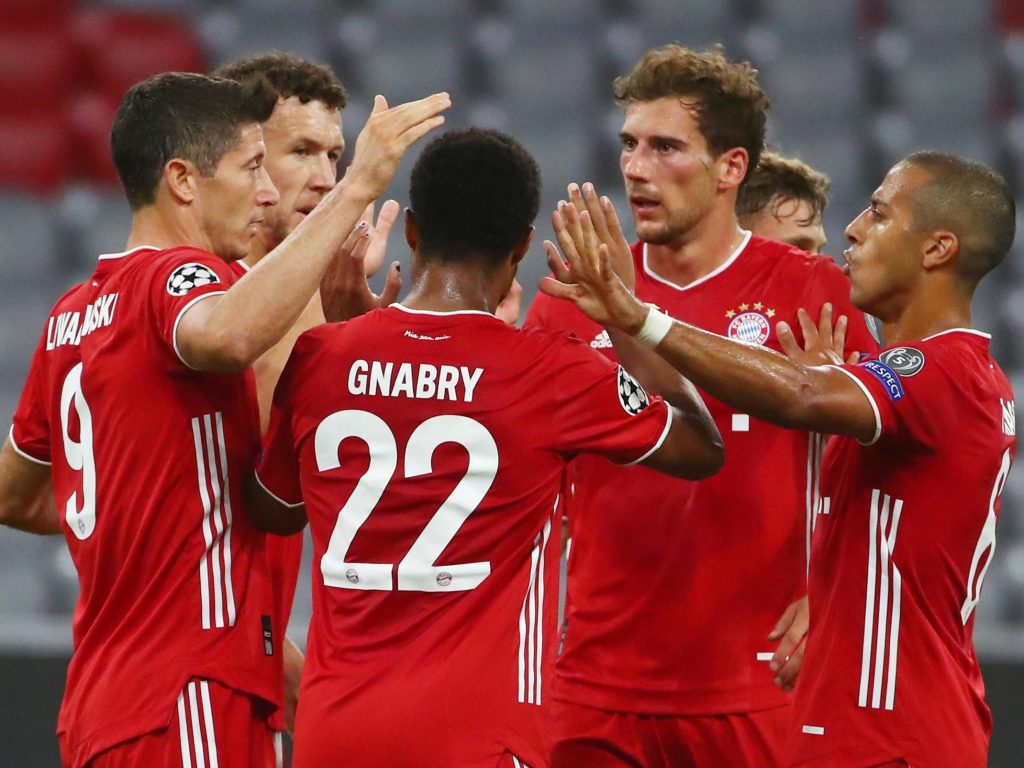 Frank Lampard’s side suffered a 3-0 defeat in the first-leg back in February. Follow live coverage as they bid to overcome that deficit and reach the Champions League quarter-finals

Frank Lampard’s side fell to a 3-0 defeat in the first-leg back in February with Serge Gnabry scoring twice and a further Robert Lewandowski goal seemingly putting the last-16 tie beyond the Premier League outfit. No team in the history of the competition has ever come back to progress from such a position having lost the first home leg by such a margin, but Lampard and his young team will be hoping they can become the first.

They won’t have it easy though against a Bayern side who have gone on to become Bundesliga champions since the last time these two met and are one of the favourites to win the whole tournament. We’ll have all the action for you live from the Allianz Arena:


Barcelona are 3-1 up (4-2 agg) in tonight’s other game, so a Barca-Bayern quarter-final in Portugal looks almost a certainty now. That’s one to look forward to.

The first half comes to a close. It’s been tough for Chelsea, as many expected. Bayern are a class above, and put the tie to bed pretty early on. Hudson-Odoi’s disallowed goal and Abraham’s late consolation are positives for the Blues, but they’ve been second best throughout so far.

Chelsea do have a goal back now. Emerson does well, finding room to cross on the left and drilling the ball across the face of goal. Neuer can only parry it straight to Abraham, who anticipates it and has a tap in from close range.

43 min: Emerson goes into the book for a late challenge on Goretzka, who was under pressure as he tried to play a back pass to Neuer.

40 min: Close! Perisic breezes past James on the left and drills a cross towards Muller, who tries to flick the ball in from a couple of yards out. He doesn’t quite get enough on it and Caballero saves.

37 min: The game has settled back into a familiar pattern after that brief resurgence from Chelsea. Bayern’s movement is so fluid, and they’re playing with a lot more energy and purpose than their visitors.

34 min: Lewandowski hits a shot with real venom that Zouma does well to block. The sound of it echoes around the stadium, which suggests it was probably a painful one for the defender.

31 min: Bayern, having seen Hudson-Odoi’s goal ruled out, go close at the other end through Gnabry, who breaks into the box and slams a volley wide of the left post.

The goal won’t stand. A VAR check confirms that there was an offside in the buildup. A tough one to take for the youngster.

That’s more like it from Chelsea! Hudson-Odoi collects the ball, drifts towards the edge of the box and curls a shot into the far corner. It’s an excellent strike and Neuer is well beaten.

26 min: The first sign of attacking intent from Chelsea as Emerson drives forward and unleashes a powerful shot. Neuer gets a strong arm to it to keep the ball out.

Far too easy for Bayern. Muller closes Kovacic down and dispossesses him, picking out Lewandowski in the process. The Poland striker looks certain to go for goal, biding his time on the edge of the box. Instead, he slides a pass into Perisic on the right, and he slots his finish low past Caballero. That makes it 5-0 on aggregate.

20 min: Thiago is running things in the middle so far, and the prospect of him in Jurgen Klopp’s Liverpool team should frighten the rest of the Premier League. For now, though, he’s still at Bayern, who are completely dominant here.

18 min: Gnabry cuts in from the right and whips in a low cross with his left foot. It beats Lewandowski and Muller and bounces just past the far post, with Caballero motionless.

17 min: Goretzka goes for the spectacular, striking a high, floating ball with an acrobatic volley which sails over the bar.

14 min: Davies races away again down the left, leaving everyone else in his dust. He plays a clever cut back to Muller, on the edge of the box, but his shot flashes over the bar.

13 min: Chelsea can’t really deal with Bayern’s high press at the moment. Kante, in particular, looks a little off the pace, and the passing from the visitors has been loose.

11 min: Bayern are on the front foot again immediately as Kante loses the ball under pressure and Perisic finds Gnabry. The former Arsenal man unleashes a shot from distance which bounces just in front of Caballero, but the goalkeeper clutches it to his chest.

Clinically dispatched from Lewandowski. He lifts his finish into the top right corner, leaving Caballero with no chance. That takes him to 52 goals for the season.

Please allow a moment for the live blog to load

READ  Are Face-To-Face Meetings Still Relevant In The Remote Age?