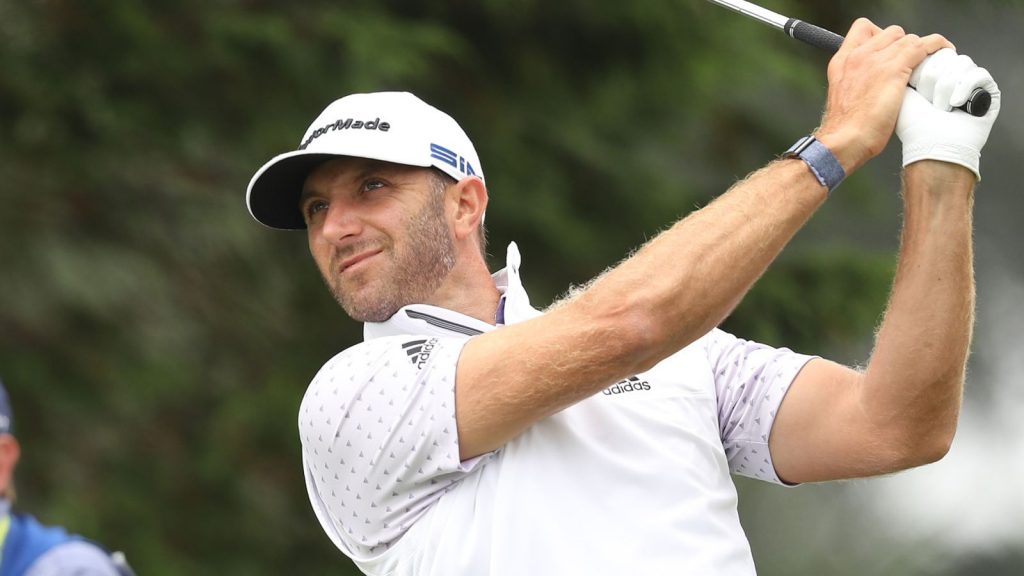 Dustin Johnson will take a one-shot lead into the final round of the PGA Championship as Brooks Koepka stayed in the hunt for a third straight win on an intriguing day three.

Shortly after overnight-leader Li Haotong began his third round, there were as many as 19 players within two strokes of the lead at one point, but the heavily-congested leaderboard dispersed over the final hour as Johnson’s 65 took him to the summit on nine under par.

Scottie Scheffler also fired a 65 to lead the chasing pack along with Cameron Champ, with Paul Casey heading the English challenge as Justin Rose battled hard to stay in contention, while Tommy Fleetwood endured a torrid day until two late birdies revived his chances and hauled him back to within three of the lead.

Koepka’s challenge unravelled with three consecutive bogeys on the back nine, although two birdies over the last three holes got him back to within two of the lead going into the final day at TPC Harding Park, with Rose, first-round leader Jason Day, Bryson DeChambeau and Tony Finau on six under, but Rory McIlroy and Tiger Woods will be playing only for personal pride on Sunday.

Travelers Championship winner Johnson’s form nosedived after his victory at TPC River Highlands, but he put himself in prime position for a second major title and could have held a more commanding lead had he not double-bogeyed the ninth hole on Saturday.

He approached the turn with four birdies already on his card, but he followed a poor drive with an overly-ambitious second into a bunker at the ninth and needed four blows just to reach the green as he ran up a six, although he responded with a birdie at the 10th and then three more over the last five holes – capped by a 20-foot putt for a two at the 17th.

“I definitely have experience in this situation that definitely will help tomorrow,” said the 2016 US Open champion. “I’ve been in the hunt a bunch of times in a major. I’ve got one major, so having that experience is definitely going to be beneficial.

“I’m still going to have to go out and play really good golf, and this is a tough golf course. Greens are getting really firm, they are fast, and I think the wind is going to blow again, so it’s going to play difficult. But I look forward to the challenge, and I will definitely be relying on a lot of that experience that I have.”

Scheffler, who made five birdies in an outward 31, stormed into a share of the lead when he birdied 15, 16 and 17 only to bogey the last to close on eight under, where he was joined by Champ after he mixed six birdies with three dropped shots in a 67.

Get the best prices and book a round at one of 1,700 courses across the UK & Ireland

Workday Charity Open champion Collin Morikawa emulated Scheffler’s late run of three straight birdies and handed in a 65 to get to seven under, with Casey also tied for fourth after he cruised to the turn in 33 and then parred every hole on the back nine to post a 68, his third sub-70 score of the championship.

Koepka plotted his way cautiously around the San Francisco layout and birdied the fourth and 12th to claim a share of the lead, but his form and composure deserted him over the next three holes before he regrouped to finish with a flourish, following a birdie at 16 with another at the last after a towering approach to six feet.

DeChambeau kept his hopes of a maiden major alive with a 66 which he capped with a sensational putt from close to 100 feet for an unlikely birdie at 18, while Rose recovered from bogeys at the opening two holes to scramble a creditable 70 despite being comfortably short of his best.

Finau (67), Day (70) and Daniel Berger (70) also closed on six under along with Fleetwood, who was two over for the round and without a birdie through 15 holes before he converted from five feet at 16 and drained a 20-footer at the last to end up where he started the day.

Li’s bid to be the first Chinese winner of a men’s major hit the buffers as he struggled to a 73 to slip four strokes behind the leader, but McIlroy (71) is nine off the pace after a bogey-bogey finish, while Woods needed two late birdies to rescue a 72, leaving him at two over par for the week.