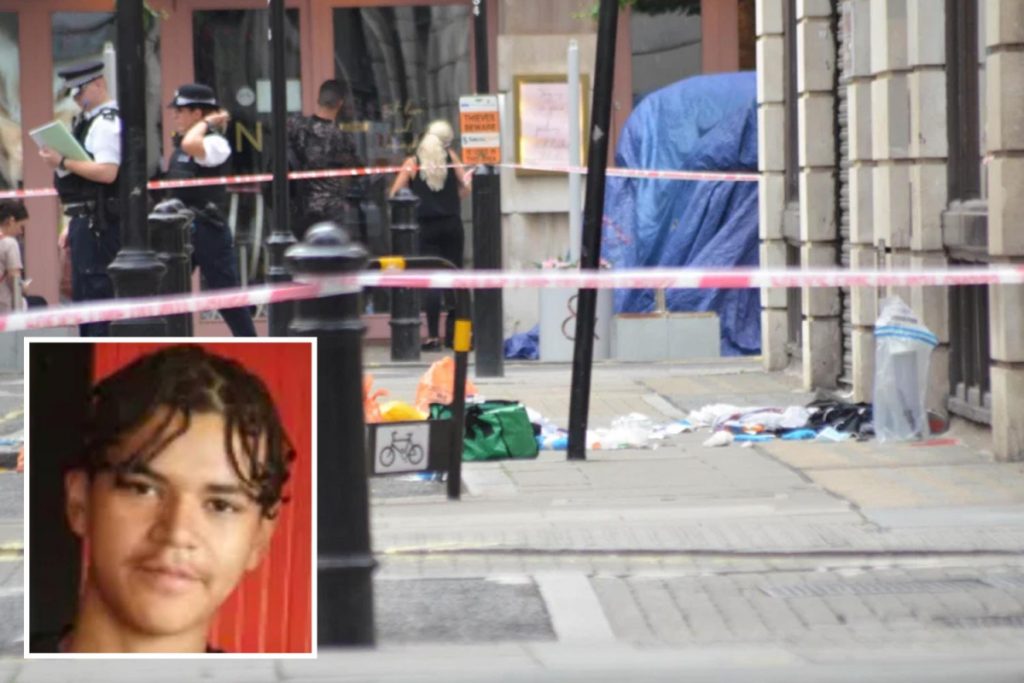 A 17-year-old boy knifed to death in front of horrified Oxford Street shoppers was a “sweet boy” who was “devoted to looking after his mum”.

The victim has been named by police as Jeremy Menesses, who lived in south London.

Police were called to reports of an assault on Market Place at the junction with Oxford Street at 5.38pm on Saturday, Scotland Yard said.

A young man suffering from a stab injury was taken to a central London hospital where he was pronounced dead at 7.33pm.

Jeremy was described as a “sweet boy” by his heartbroken pals.

One said: “All he cared about was making money for his mum and looking after her.

“We just can’t believe this has happened to him. He was innocent. He was a good person.”

“I live next to his mum, she is from Columbia. She is not very good right now.

“It is so terrible. He only celebrated his 17th birthday in July.”

Police said three men, all aged 18 and from south London, have been arrested on suspicion of murder, after going to a south London hospital with superficial stab injuries.

They have since left hospital and are now in custody.

Two of them have also been arrested on suspicion of assisting an offender.

Detective Chief Inspector Katherine Goodwin said: “This attack took place following a fight between a number of males in broad daylight and was witnessed by a large number of horrified onlookers.

“We have spoken to a number of people already but need anyone who has information, video or images to speak to us and tell us what they know. Your assistance could prove vital as we investigate this terrible incident.”

Superintendent Rob Shepherd said: “Residents and visitors will see an increased police presence in the area following this shocking incident.

“We are doing everything we can to support our specialist crime colleagues as they continue their investigation and urge anyone with information to approach officers on the street if they have information that they would like to share with us, or call 101.”

A post-mortem examination will be held in due course.

A London Ambulance Service spokesperson said: “We were called at 5:39pm on August 8 to reports of a stabbing on Market Place just off Oxford Street.

Corona cases back over critical 1,000-a-day target for 1st time since June

Man, 34, kicked to death in churchyard as police release CCTV of four men

READ  Montreal in the Red Zone | Relief in the eyes

“We dispatched two ambulance crews, an incident response officer and a medic in a car to the scene. We also dispatched a London’s Air Ambulance trauma team.

“We treated a person at the scene and took them to a major trauma centre.”

Anyone with information is asked to call police via 101 quoting reference Cad 6404/08Aug.