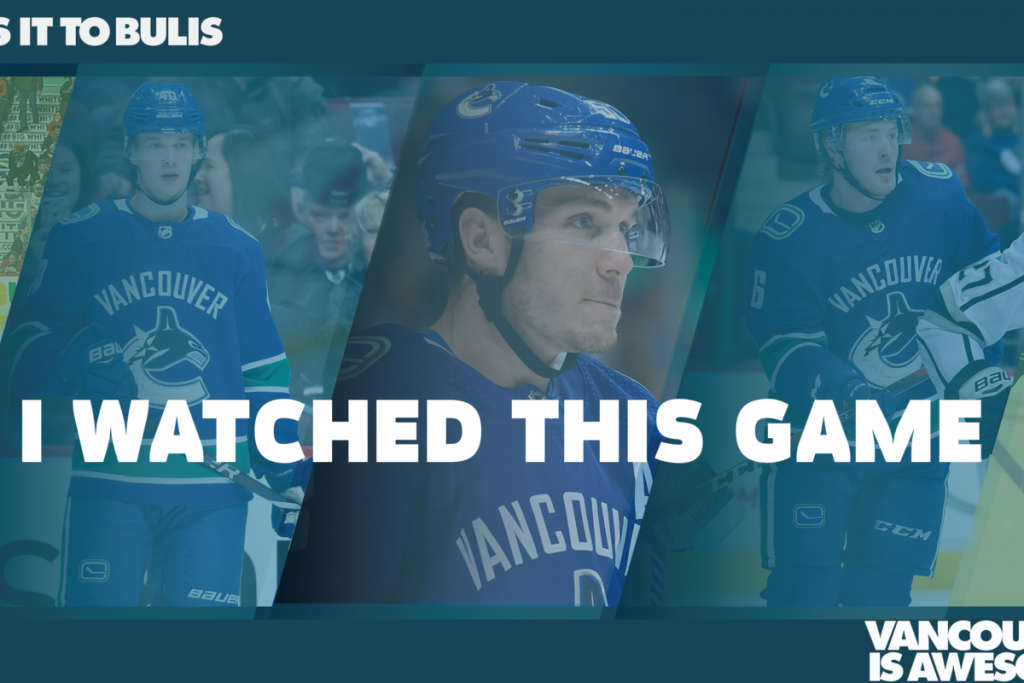 This game had everything: fishy officiating, Bo Horvat did that, and defensive hero Elias Pettersson.

You’re an NHL goaltender in Stanley Cup Playoffs. It’s overtime and the game is on the line. The puck is on an opponent’s stick, but instead of confidently staring him down as he shoots the puck, you’re not even in the crease. You’ve completely lost your net and are scrambling wildly on your hands and knees, desperately trying to get back as the puck comes off his stick towards the empty net…

Then you wake up in a cold sweat. It was just a dream. It wasn’t real.

But that nightmare situation was all too real for Jacob Markstrom on Friday night in Edmonton. A sudden 2-on-1 down low led to a desperation save for Markstrom on David Perron, as Markstrom stacked the pads to save a goal. That left him a good five feet out of his crease as a wild scramble ensued around his goal.

“It’s not very good thoughts,” said Markstrom about what goes through a goaltender’s mind in that moment. “It’s half-panic mode… You just want to get back in your net, it’s not a good feeling when you’re out there and the puck gets behind you.”

As Markstrom tried to scramble back, tracking the puck as it bounced around, his teammates crashed the crease. The puck came to Ryan O’Reilly in the crease, but in the same way that O’Reilly has shut down Elias Pettersson at even-strength all series, Pettersson shut him down, knocking the puck off O’Reilly’s stick.

The panic wasn’t over yet. Perron got the puck on his backhand with the net still wide open. Markstrom dove back, but once again Pettersson made the save, stacking the pads like Kirk McLean.

“To be honest, you almost feel like just closing your eyes and hopefully you don’t hear someone celebrating when it gets like that,” said head coach Travis Green.

“Marky first made a good save,” said Pettersson, not wanting to sell Markstrom short on the initial stop. “I saw the puck, I just tried to clear it. They still had the puck and I was just trying to cover the ice. It hit me again and we got the puck out and cleared iit.

“All of us just trying to play hard defence and I’m happy I got the stop there, but I know all my teammates would put their body on the line there.”

It’s true. While Pettersson was the hero in that moment, Brock Boeser was also lined up to block Perron’s shot and Quinn Hughes was also in the crease, blocking a centring pass a moment earlier.

“I think we had four guys in the crease, they did a great job and bailed me out when I was out of position,” said Markstrom.

Canucks head coach Travis Green frequently talks about buy-in, and it’s clear that everyone in the lineup has fully bought in.

“Our guys are willing to sacrifice, they’ve shown it, they had a lot of blocks again tonight,” said Green. “And it’s not just the guys on the penalty kill, it’s anyone. You see Petey go down to block a shot like that, I think that’s bleeding through our team: that sacrifice, that resiliency that you need to have. Again, every game’s a teaching moment for our group and they passed a hard test tonight.”

And they passed that test while I watched this game.

When your goal is so insane Chris Cuthbert can only blurt out “BO HORVAT…..DID THAT.” pic.twitter.com/nIZfTVdtTu

Saucer passes don’t get much better than that. Pettersson put that perfectly on Pearson’s blade. #Canucks pic.twitter.com/OGopOQxJWF

#STLBlues Blais throws a hit on #Canucks Sutter and we get another scrum pic.twitter.com/qrozI3rBlh

That’s a dangerous area of the ice, have to hope Myers is okay. #Canucks pic.twitter.com/4TJrRgbyeQ

Hughes with the fantastic bank pass, then ducks a hit and has some words for Bozak after Horvat’s goal. #Canucks pic.twitter.com/TW8nthgAvC