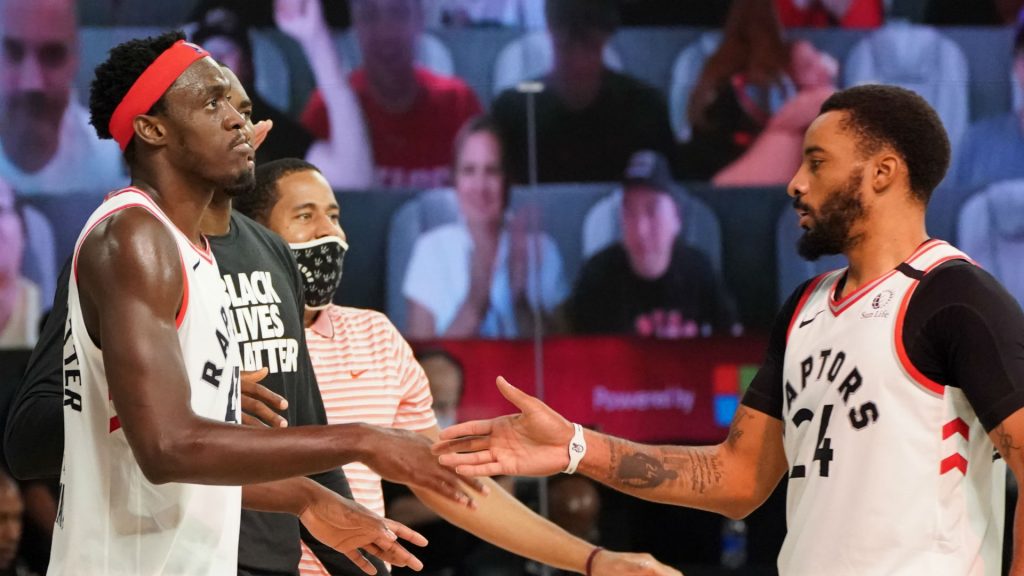 Welcome to “One Play!” Throughout the 2019-20 NBA season, our NBA.com Staff will break down certain possessions from certain games and peel back the curtains to reveal its bigger meaning.

Context: In Toronto’s Game 2 victory over the Brooklyn Nets, we finally got to see a lineup that I’ve been excited about for a long time.

The lineup? Pascal Siakam at centre with Fred VanVleet, Kyle Lowry, Norman Powell and OG Anunoby surrounding him. As ESPN’s Tim Bontemps noted, the five of them logged only two minutes together during the entire regular season.

Raptors head coach Nick Nurse went to it more out of necessity than anything else – Marc Gasol and Serge Ibaka both struggled in Game 2, forcing Nurse to go with Toronto’s “five best guys” to close the game – but we still caught a glimpse of why it can be effective in the right situations.

There was one particular play that stood out. Let’s take a closer look.

The play: Powell blows by Jarrett Allen for the dunk.

Breakdown: Lowry pushes the ball up the court following a missed shot from Garrett Temple.

The Nets get back in time to prevent the Raptors from scoring a quick basket, so Lowry passes the ball to VanVleet at the top of the 3-point line to reset.

Allen starts the possession on Siakam but switches assignments with Temple when Siakam makes his way towards VanVleet to set a screen. Why? So he’s in better position to protect the rim should someone drive to the basket.

Anunoby, meanwhile, balances the court by clearing out from the right side to the left side.

Rather than having Joe Harris fight through Siakam’s screen, Temple switches onto VanVleet while Harris switches onto Siakam, who pops to the 3-point line instead of rolling to the basket.

The floor is now clear for VanVleet to attack Temple one-on-one.

Temple does a decent job keeping VanVleet in front of him, but VanVleet is able to get deep enough to draw Allen away from Powell in the strongside corner. VanVleet makes the right read, kicking it out to Powell rather than continuing his drive.

Powell shot only 1-for-6 from 3-point range in Game 2, but he made 44.0 percent of his catch-and-shoot 3-point attempts during the regular season. Allen closes out on him out of fear of him getting a clean look at a 3-pointer, paving the way for Powell to take him off the dribble.

With Allen being Brooklyn’s only rim protector on the court, there’s nobody in position to prevent Powell from getting an uncontested dunk.

Why it matters: The intrigue with playing Siakam at centre should be obvious – it gives the Raptors the luxury of putting five players on the court who can shoot, pass and dribble at a high level. Gasol and Ibaka are both capable of doing those things, but them trying to make a play off the dribble is a little different than VanVleet, Lowry, Powell or Anunoby doing it.

Offensively, there’s no reason why building lineups around Siakam at centre shouldn’t work. If teams don’t downsize themselves, it basically becomes a game of who has the biggest mismatch. Allen is guarding Powell on the 3-point line? OK, give him the ball and see what he can do against Allen on a closeout. Siakam is being defended by someone his size? Have him set a screen on VanVleet or Lowry to force a switch and let him feast in the post against a guard while everyone spaces the floor around him. VanVleet or Lowry are the ones who have the favourable mismatch? Clear out to let them go one-on-one.

Anunoby is the weakest link of those five offensively, but he’s shown some promising signs of growth as a scorer in the season restart. He’s been looking to attack smaller players in the post a little more and he’s improved tremendously as a driver. He might not quite be at a point where you’re confident that he can consistently create a solid look for himself against a mismatch, but he could get there eventually.

Besides, Anunoby is the key to the lineup working defensively. What lineups with Siakam at centre lack is size. It’s why it’s not an answer to every team in the league. (Can you imagine the Raptors going that small against Joel Embiid or Giannis Antetokounmpo? It probably wouldn’t work). But against a team like the Nets who don’t have a centre who is going to overwhelm opponents with their back to the basket – no team averaged less points per game in the post than the Nets this season – the Raptors can get away with it.

It helps that Anunoby and Siakam have spent time matched up with fives this season. According to data collected by Krishna Narsu of The Bball Index, Anunoby spent 13.7 percent of his minutes in the regular season guarding centres compared to 15.3 percent for Siakam. Again, that doesn’t necessarily mean the Raptors want either one of them guarding Embiid in the post – although it is worth noting that Anunoby did a tremendous job against Nikola Jokic in one game this season – but they’re each capable of hanging with someone like Allen in spot minutes.

“It’s the versatility, knowing me and Pascal can both switch onto [Allen],” Anunoby said about Toronto’s small lineup after Game 2. “We can spread the floor, all shoot, drive and pass. Just play five out. Spreading the floor so the rim is open. Make them adjust to us.”

Another benefit of playing them all together: Toronto can switch more aggressively. The Raptors are home to some of the most versatile defenders in the league, with Anunoby and Siakam being able to defend all five positions and VanVleet, Lowry and Powell being able to guard three or four positions depending on the matchup. With all five of them on the court, the Raptors can switch almost across the board.

We even caught a glimpse of that in Game 2:

This doesn’t mean that playing Siakam at centre is suddenly going to become a staple in Toronto’s offence, but Game 2 of its first-round series with Brooklyn proved that it can be a game-changer in the right situation.

Hopefully the next time Nurse breaks it out won’t be because Gasol and Ibaka haven’t given him any other choice.

The views on this page do not necessarily reflect the views of the NBA or its clubs.