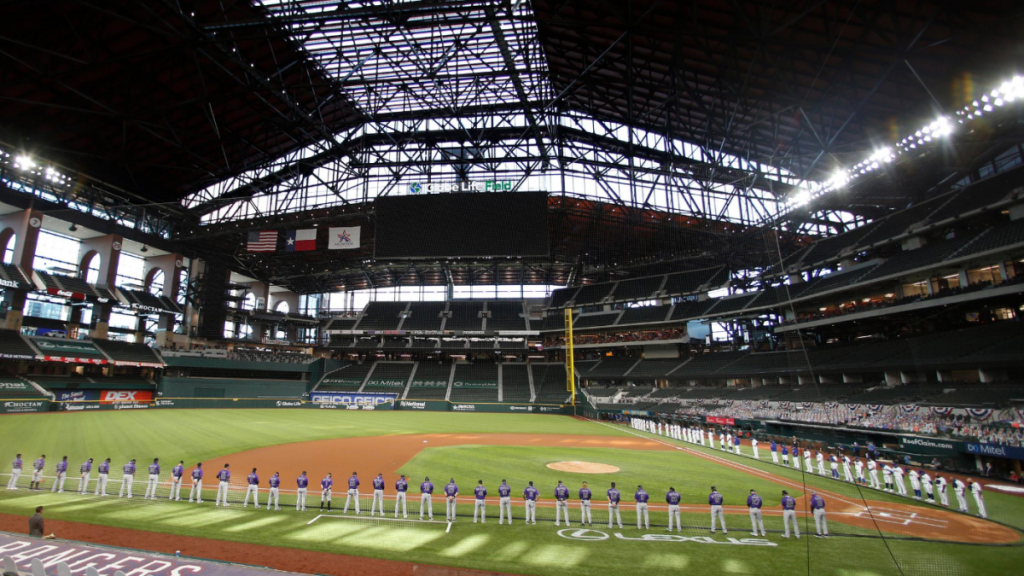 Wednesday night three Major League Baseball games — Brewers vs. Reds, Dodgers vs. Giants, Mariners vs. Padres — were postponed as players joined their NBA brethren to protest racial injustice in America following the shooting of Jacob Blake, a Black man, in Kenosha, Wisconsin, by police. Others like Jason Heyward and Matt Kemp sat out their games.

“Given the pain in the communities of Wisconsin and beyond following the shooting of Jacob Blake, we respect the decisions of a number of players not to play tonight,” MLB said in a statement Wednesday. “Major League Baseball remains united for change in our society and we will be allies in the fight to end racism and injustice.”

There will be more postponements Thursday. The Oakland Athletics and Texas Rangers will not play Thursday’s game, the A’s announced. The team released the following statement:

Social injustice and systemic racism have been part of the fabric of our lives for far too long. We have a responsibility to use our platform, to lend our voices for those who are not being heard.

We need to continue having the uncomfortable conversations and work towards being a unified force for change.

These conversations will push the boundaries and enable us to come through on the other side with impactful results.

All too often we hear about the plight of our fellow man and fail to act. It is long past due that these communities are being heard, seen, understood and supported.

We will not take the field tonight to help raise awareness for these social issues, not just tonight, but for our collective future. This is the first step in our relentless pursuit for meaningful change.

“We respect the decision by the Oakland A’s players to postpone tonight’s game,” the Rangers said in a statement. “We stand with all those who condemn racial injustice and are committed to helping bring about an end to systemic racism.”

The Philadelphia Phillies also will not play Thursday night, reports Jim Salisbury of NBC Sports Philadelphia. Phillies players made the decision on their own and did not consult with their scheduled opponent, the Washington Nationals. The Minnesota Twins and Detroit Tigers will not play either, reports MLB Network’s Jon Heyman.

“I would tell them to go with their heart,” Phillies manager Joe Girardi told reporters, including Matt Breen of the Philadelphia Inquirer, when asked about Wednesday’s protests. “Feelings are feelings. They’re never right or wrong. They’re just feelings. You have to go with your heart and what your heart tells you. I would support them with whatever they did.”

Furthermore, the Boston Red Sox are strongly considering sitting out Thursday’s game against the Toronto Blue Jays, reports ESPN’s Jeff Passan. Passan says the two clubs are currently discussing the situation and have expressed full support for each other either way. Jim Bowden of CBS Sports HQ says the Red Sox will play Thursday.

Bradley has apparently made the decision not to play in Thursday night’s game one way or the other, reports ESPN’s Marly Rivera. He has been the driving force behind the team’s possible protest.

“I am the only Black person on this team,” Bradley said, according to Smith. “So I kind of feel like it’s my responsibility to address it in certain situations just so people can see what I feel and the things that I think about. I can take it on.”

Bradley added the Red Sox did not have a team meeting to discussing sitting out Wednesday’s game because they were already out on the field and had begun warmups by time Brewers players had chosen to sit out their game. He did say he spoke to manager Ron Roenicke and catcher Kevin Plawecki about things before Wednesday’s game.

Blue Jays manager Charlie Montoyo told reporters, including the Associated Press, the team is “going to talk to the players” about the protests. “We’re going to discuss it and see where we go with this,” he added.

There were originally 15 games on Thursday’s schedule, including four doubleheaders. The Athletic’s Ken Rosenthal reports MLB and the MLBPA spoke Thursday morning to discuss the player protests.