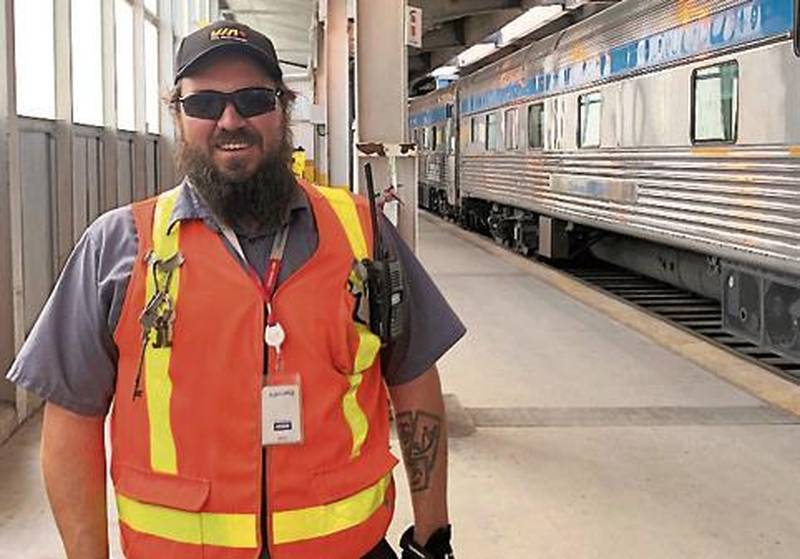 Churchill
The evening sun bathes the Canadian summer sky over Winnipeg in shimmering colors, and a pianist has taken his seat at the grand piano under the golden stucco of the hotel lounge. At the bar a man refills himself with white wine. Instead of a hand, it has a hook.

The gentleman with the white hair combed back neatly introduces himself as a doctor. When he hears of the upcoming adventure, a train journey to the far north to Churchill, he looks knowingly. After all, he has lived here in the Manitoba Province in central Canada for more than 25 years.

The doctor has advice that sounds like a warning: “If you like the peace and the silence and the memory of a bubble in the sea of ​​nothing, go. There is nothing there. “

The haunting words reverberated in Union Station in Winnipeg the following morning. There are two diesel locomotives on the track, behind them a freight car, one with seats, a dining car and finally two sleeping cars. This is what a lifeline that has become metal looks like in Canada.

It was the summer of 2017 when severe flooding disrupted the route and brought Churchill to the brink of collapse. The city’s fate now depended on a flight connection, because there are no roads to Hudson Bay. When the first train pulled into the city again after an agonizing 18 months, its residents celebrated on the icy streets. The New York Times added Churchill to its list of places to visit in 2020.

READ  Nearly 500,000 French people made the appointment on Friday

The journey takes 50 hours over 1,697 kilometers from the agriculturally dominated south of Manitoba up to the arctic sea of ​​Hudson Bay. Into the wild. To where the car doors are always open in case someone has to take shelter from a polar bear.

The somewhat morbid, blue-gray post-war charm of the train interior makes it clear that not only a pleasure trip, but also adventure is ahead. But deprivation can only be felt digitally. When the houses in Winnipeg give way to fields under the summer sun and the train leaves the mobile cell phone network behind, line by line, an unexpected inner calm returns.

No appointments, no deadlines and no typing. The travelers look up from the screen and place their fate in the hands of the Canadian railways. Two days to devote yourself to everything that is not colorful and loud enough in everyday life. As the train slowly creeps through the prairies of the provinces of Manitoba and Saskatchewan, while fields become forests and fields again and – increasingly rare – villages, thoughts learn to fly.

At the very front, train driver Nick Vinci – 30, orange-red vest, long beard – sits in his locomotive. He has already seen deer, elk, black bears, foxes and wolves on the route. The night is most fascinating: “You can see the northern lights dancing right in front of you. They cast a spell over you. “

Further back, the travelers move closer together. 17 of 35 beds are occupied. At first they are just strangers, but over time they get faces, names and stories. Joana is from the west coast and is traveling with her brother. She calls him “Bro”, which seems involuntarily strange given her advanced age. James from Australia is obsessed with Brexit news even though he no longer lives in London but in Bergen, Norway. Coralli has been traveling through Canada for a year and a half and wants to work at Churchill’s Polar Institute.

New groups are formed. The initially felt compulsion to deal with fellow travelers becomes a privilege. Prejudice turns out to be wrong and people are entertaining. Susan says: “I’ve met the most interesting people on trains or on ships”. Shortly afterwards she finds out that she and Joana come from the same place on the Pacific.

On the last morning the Canadian vastness gave way to a bleak wasteland. The bare stumps of the trees grow like fangs from the ground. The train finally arrives at the destination station five hours late.

“There is nothing there,” the doctor’s voice echoes through his head. And the first steps in Churchill prove him right. Cool, wintry fog hangs over the street in front of the train station. The rental car is in the parking lot, unlocked of course. The key is in the passenger seat.

Nature is coming back

The first drive leads to Mayor Michael Spence. He tells how the place is fighting against rural exodus. “When I grew up, Churchill had more than 6,000 people.” Today there are fewer than 1,000. But nature has come back for this – he means the beluga whales. “Tourism is alive,” says Spence. The large sign at the city entrance praises Churchill as the “polar bear and beluga capital” of the world. In winter, tourists go on polar bear safaris here. But if you take a boat out into the mouth of the Churchill River in summer, you don’t need any luck to see the beluga whales. They are curious and keep coming back to the boats in swarms.

The really fascinating thing about Churchill, however, is this feeling, which has been growing since the train journey began and is now breaking new ground: the networked world has finally fallen by the wayside.

Climate and travel time: The climate in Churchill is harsh, but the travel season lasts until late autumn. The nights in February and March are particularly suitable for observing the northern lights. Bird watchers get their money’s worth in May and June. The best months to see beluga whales are July and August. A particularly large number of polar bears can be seen from July to November.

Getting there: You can fly to Churchill in a Calm Air plane – for around 500 to 600 euros each way. A seat on the train is much cheaper, a bed in a sleeping car also costs the equivalent of around 500 euros.

Fantastic vacation trips – well organized and looked after by a German travel companion from Oldenburg.