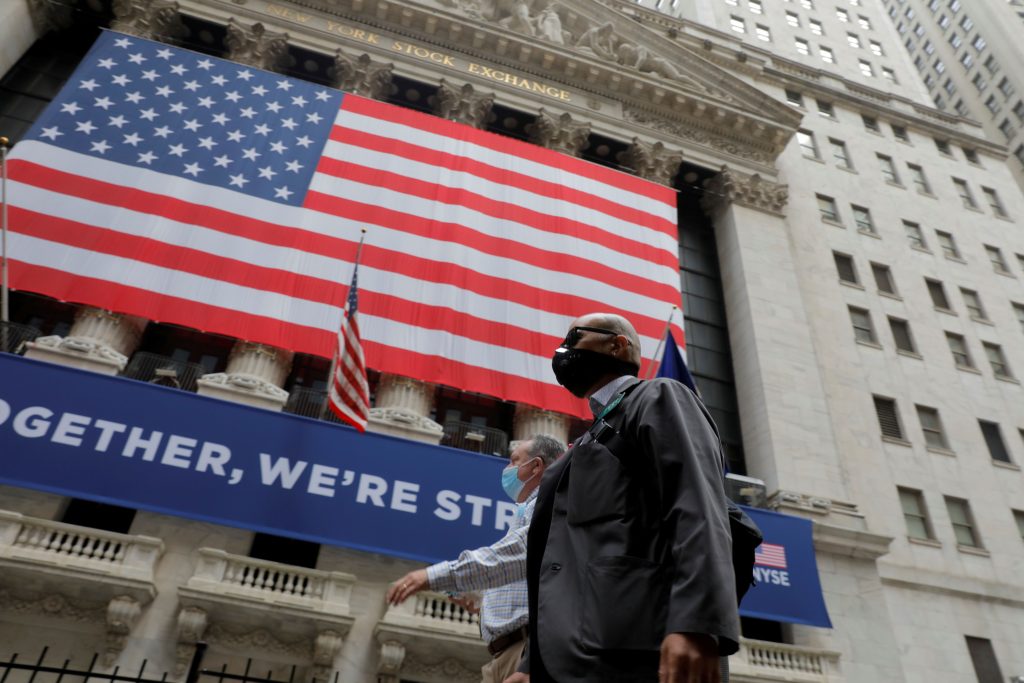 Wall Street opened the final trading day of August on a mixed note after a month of big gains, as investors position themselves for a busy week, while pricing in new developments in the coronavirus crisis.

Investors are also watching the high-flying tech shares of Apple (AAPL) and Tesla (TSLA) — whose stocks split on Monday after setting new record highs. Tech stocks have boosted market sentiment, and helped grease the wheels of a rally that’s carried benchmarks to consecutive closing highs thanks to Amazon (AMZN), Facebook (FB), and Alphabet (GOOG, GOOGL), among others.

Last week’s nearly unbroken string of wins carried the Nasdaq and S&P 500 to new record closes, and allowed the Dow to reverse all of 2020’s bear market losses. Traders have been encouraged by an accomodative Federal Reserve, and the COVID-19 outbreak that appear to be moderating in the Sun Belt region — which until very recently had been a domestic epicenter of new infections. Additionally, encouraging developments in the race for a vaccine have given the market reasons for hope.

This week will be an acid test for assumptions about the U.S. recovery, which has defied much of the gloomy expectations associated with a relentless rise of coronavirus cases. With unemployment still elevated, the August payrolls data will be closely watched for signs the labor market is healing, and more displaced workers are finding unemployment.

“Recall that the U.S. non-farm payrolls collapsed by 22.1 million in March and April, noted Marc Chandler at Bannockburn Global Forex. “In the three months through July, about 9.28 million workers returned, or about 42%” of those thrown out of work.

“With a little bit of luck, the unemployment rate can slip back below 10%, the peak in the Great Financial Crisis,” he said, but warned that “some estimate that around a quarter of the overall job loss may be permanent.  That still leaves scope gradual improvement in the coming months.”

The broader S&P 500 Index has now risen 8 of the last 9 weeks — up 7 days straight — and set five straight record closes. Meanwhile, the Dow has now reversed all of its 2020 losses, and now sits less than 1,000 points away from February’s record high.

Given that “July activity indicators have generally printed favorably…we are lifting our tracking of current-quarter growth from 20.0% to 27.5%,” wrote economist Michael Feroli. The bank’s raised expectations were bolstered by data released by the St. Louis and New York Federal Reserve Banks, which also expect Q3 growth to soar.

“Even with some slowing in August-September household outlays, perhaps due to the interruption of federal income support, real consumer spending looks set to grow at 36.0% annual rate in Q3,” Feroli added.

Traders are finding inspiration a tough sell on the last trading day of the month, with stocks flat to slightly weaker. The Dow is taking the brunt of selling pressure, off more than 200 points on the day.

Here’s where things stand at midday:

United Airlines (UAL) is permanently scrapping some change fees, underscoring how an airline industry walloped by the COVID-19 crisis is eager for customers to start filling seats again.

On Sunday, United became the first U.S. legacy carrier to eliminate fees for standard economy and premium cabin flights, as well as standby fees for all same day departures. The company also extended its unlimited change fee waiver to flights purchased through the end of the year.

United’s shift comes at a time when major carriers are in desperate need of more revenue, as the coronavirus crisis crushes demand for leisure travel. Last week, all the major carriers warned the clock was ticking on mass layoffs, as COVID-19 rescue cash dries up and with most carriers operating at dramatically reduced capacity.

The stocks of two tech giants are starting Monday’s trading with split stocks — which isn’t stopping investors from snapping the extra shares up all over again.

Crude is up by over 1% in early dealings, trading comfortably above $43 per barrel. It’s worth noting that oil prices have more than doubled since the startling collapse this spring, prompted by the double-barrel blast of falling demand from the COVID-19 crisis and a price war between Russia and Saudi Arabia.

In a research note over the weekend, Goldman said the rebalancing has “slowed sharply” amid a stalled demand recovery and higher OPEC+ quotas. While the bank sees Brent crude peaking at $46 per barrel, it expects 2021 to be more constructive:

We believe this reflects growing evidence supporting our bullish 2021 oil forecast. First, the market managed to remain in deficit despite a global second COVID-19 wave, with US cases now declining without US oil demand having to fall. Second, 2021 fundamentals appear skewed to a faster rebalancing than our base case given (1) the rising likelihood of widely available vaccines next spring, (2) discipline by both OPEC+ and shale producers and with the majors’ upstream capex still low and shifting towards renewables.

Key to the resilience of spot prices despite stalling inventory draws this summer has been the steady rally in long-dated prices. These have outperformed our expectations once again, rising alongside a weakening dollar as next year’s growth prospects improve. Given our rising confidence in the market rebalancing next year, we are bringing forward our forecast for higher long-dated prices, with 3-year forward Brent expected to reach $58/bbl by end-2021.

The bank also sees Brent spot prices jumping to $65 per barrel in Q3 of next year.

Stocks are set to extend last week’s rally at the open, with futures in the green as Wall Street kicks off the final trading day of August. All eyes will be on the shares of tech heavyweights Tesla and Apple — which are perched at record highs — as their stocks will split when trading begins.

Here are the main pre-market moves ahead of the opening bell:

For tutorials and information on investing and trading stocks, check out Cashay