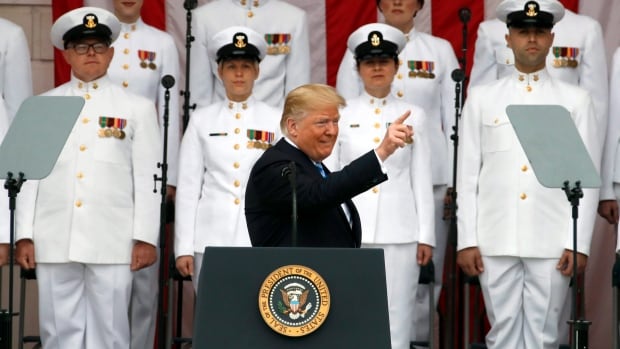 A new report by President Donald Trump has made insulting remarks about captured or killed U.S. military members, including “losers” and “suckers” of the American War who died in 2018 at the Aisne-Marne American Cemetery in France.

Trump said Thursday that the story was completely untrue.

These allegations were first reported Atlantic. A senior Defense Department official who was directly aware of the events and a U.S. Marine Corps official who spoke about Trump’s remarks confirmed some of the comments to the Associated Press, including 2018 cemetery remarks.

Defense officials said the remarks came as Trump pleaded to visit a cemetery outside Paris during a meeting of his presidential daily on the morning of November 10, 2018.

National Security Council and Secret Service staff told Trump it was dangerous to travel to the cemetery by helicopter in rainy weather, but they could get there. Trump responded by saying he did not want to visit the cemetery “because it was full of losers” because he did not have the authority to speak publicly about the situation.

The White House blamed the canceled visit on poor weather at the time.

In another conversation during the tour, The Atlantic said that Trump called the 1,800 Marines who died in World War I “suckers” to kill them.

Trump denounced the Atlantic report Thursday night as a “disgraceful situation” by a “terrible magazine.”

Speaking to reporters over Air Force One on his way back to Washington from a campaign rally in Pennsylvania, Trump asked, “Which animal says something like that?”

White House Chief of Staff Mark Meadows said, “People try to abuse someone when they are leading a presidential campaign.”

Democratic presidential candidate Joe Biden said Thursday that “if the revelations in today’s Atlantic article are true, they are just another sign to show how deeply President Trump and I disagree about the role of American president.”

“Duty, honor, nation – these are the values ​​that guide our service members,” he said in a statement Thursday night, adding that if elected president, he would make sure “I know our American heroes have their backs and respect their sacrifice – always.” Served in Iraq in 09.

Defense officials have confirmed to The AP Atlantic that Trump accompanied his chief of staff, John Kelly, to visit the Arlington Cemetery of Kelly’s son, who was assassinated in Afghanistan in 2010. He said to Kelly: “I didn’t get it. What do they have?”

Republican Sen. John McCain, who spent years as a prisoner in Vietnam, a senior Marine Corps official and The Atlantic also reported that Trump said he was unwilling to support the August 2018 funeral of a decorated Navy veteran. War, because he is the “loser.” Atlantic reports that Trump is angry that flags have been flown at half-staff for McCain: “What are we doing? Guy is an F-King loser.”

In 2015, shortly after launching his presidential candidacy, Trump publicly fired McCain, saying “he’s not a war hero.” “I like people who are not arrested,” he said.

An Arizona legislator has expanded his criticism of Trump McCain for criticizing his political style, ending with a midnight “no” vote to thwart Trump’s plans to repeal the Affordable Defense Act. That vote damaged both biased allegiances, and Trump continued to attack McCain even posthumously for that vote.

The magazine also described Trump as a “loser” to former President George HW Bush because he was shot dead by the Japanese as a Navy pilot in World War II.