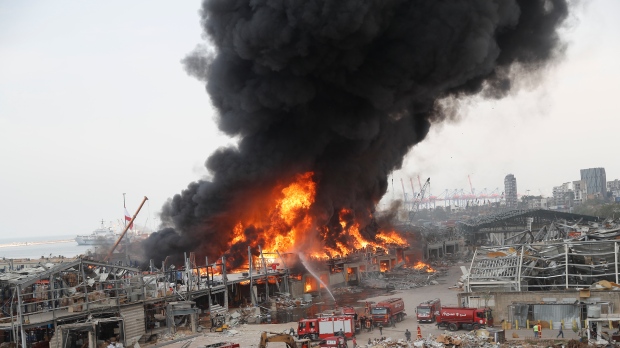 BEIRUT – A huge fire broke out at the port of Beirut on Thursday, sparking new panic among residents struggling with the tragic effects of a catastrophic explosion at the same site last month.

Some sought safety in closed bathrooms or opened their windows to prevent glass from shattering in the event of another explosion; Others piled up in cars to flee the capital.

The cause of the fire at the port is unclear, as the August 4 blast blew up nearly 3,000 tons of ammonium nitrate, sending a shock wave that killed nearly 200 people and caused widespread damage.

The Lebanese military says a fire broke out between containers of tires, oil and other combustible materials in the port duty free zone.

Fabrizio Carboni, regional director of the International Red Cross, tweeted that his company’s warehouse, which stores thousands of food parcels and oil, is at risk of serious disruption to humanitarian operations.

Port director Bassem al-Qaisi told Voice of Lebanon Radio that the fire broke out in a warehouse containing barrels of cooking oil and then spread to the area where the tires were piled up. He said it was too early to tell if it started “as a result of heat or other mistakes”.

In a sign of ever-growing distrust in the aftermath of the blast, many Lebanese politicians have accused him of deliberately trying to destroy evidence at the port that led to the blast. The fire on Thursday was the second fire this week, causing some panic after a small fire on Tuesday but was quickly extinguished.

Lebanon is mired in an unprecedented financial crisis and economic collapse, a political class blamed for decades of abuse and corruption. The blast last month seems to be the culmination of leaders who are unable to manage the affairs of the country and protect the people. So far, authorities have not been able to give an answer about the blast and there is no accountability for it.

For Dana Awad, the mother of two girls, she brought back memories of the tremors that shook the Beirut neighborhood before the explosion.

“We have all the windows open and are currently in the corridor,” Awad said when they sought security in the hall. “I’m still shaking the earth. I’m living in flashback.”

Jennifer Moorhead, director of Save the Children’s Country in Lebanon, said the fire would inevitably bring back painful memories for many Lebanese children who are still trying to recover from last month’s blast.

“The children in Beirut have suffered a terrible shock and they need time to recover; today’s fires and panic will only get worse,” she said.

Najat Saliba, a professor of atmospheric chemistry at the American University of Beirut, tweeted warnings that the elderly and children should protect themselves or leave the city if possible until the smoke clears.

The aggressive fire and smoke column is the same as it was before the devastating explosion. By then, aspiring residents were standing on the balconies or behind the windows in offices and homes to photograph the flames, raising the wounds from the flying glass when there was a gigantic fireball mushroom across the city.

On Thursday, panicked residents smashed open windows and warned each other. Local TV stations said companies with offices near the port had asked employees to leave the area. Some hid in the bathrooms, while others left the work they were doing and went home.

A video on social media showed port employees running from the blaze, recalling dozens of workers and 10 firefighters who died in the blast. Lebanese forces closed the main road near the port and diverted traffic.

A road running parallel to the harbor was blocked with cars, with some scary looking women and children trying to flee. “Get out of my way!” A woman screamed at others who were blocking her way. A woman sitting in the car next to him covered her ears with her hands, saddened to see all this.

The fear was exacerbated by fears that there might be more chemicals in the port wreckage. Earlier this month, the military said more than 4 tonnes of ammonium nitrate was found in four containers stored near the port.

French and Italian chemists working in the wreckage of the port have identified more than 20 containers of hazardous chemicals. The army later said the containers had been removed from the port and stored safely.

The August 4 blast, the deadliest in Lebanon history, killed 191 people, injured 6,500 and damaged thousands of buildings.