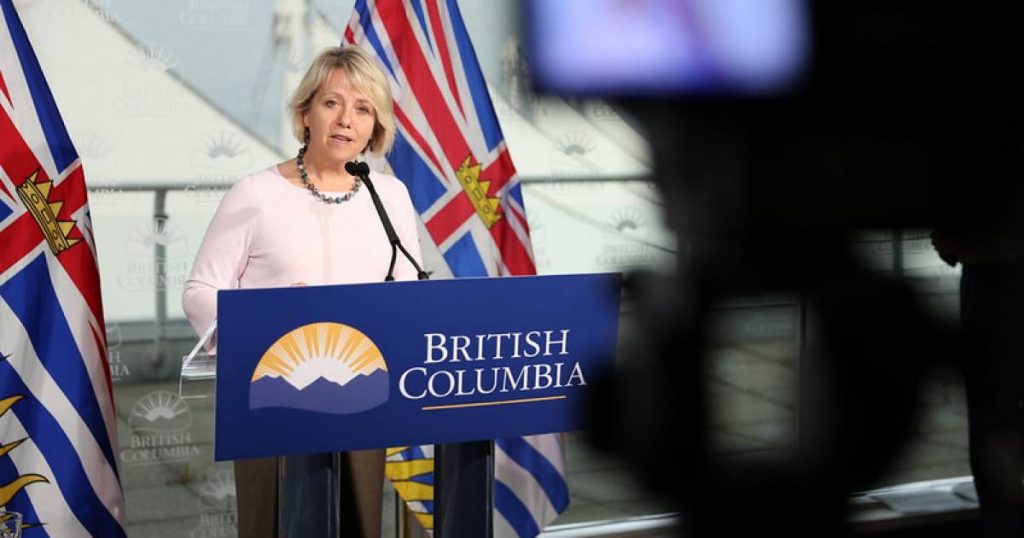 Cases continue to rise in all categories, but no new outbreak has been announced.

However, COVID-19 exposure incidents have been reported in several locations, including another five schools, a beach, a store and two planes.

In a joint statement for today’s BC COVID-19 update, BC Regional Health Officer Dr Bonnie Henry and Health Minister Adrian Dix said, “The cases we see today are a direct result of how we spent our Labor Day weekend.”

Meanwhile, the Vancouver Park Board announced today Reopening Full vehicular access to Stanley Park. Also, both the city of Vancouver and the BC government Expanding Authority for temporary patio until October 2021. In addition, the regional government is extending the permit to distribute alcohol with meals until March.

Henry and Dix announced 139 new cases in BC today, including seven epi-linked cases. (This number was previously at a record level on September 10 Yesterday 165 new cases set a new record.)

In addition, BC also reported 40 past cases tested between August 11 and September 16 for individuals without personal health numbers. Henry and Dix explained that although these cases were investigated, they did not enter the data system.

Active cases did not stop growing for several days. Once again this number increased, this time an increase of 98 people from 1,705 active cases yesterday to 1,803 active cases COVID-19 today.

The number of cases in the hospital increased by two to 59 patients, 20 of whom were in intensive care.

After a few days of decline, the number of people overseeing public health (due to being exposed to confirmed cases) increased from 2,949 to 3,075 (an increase of 126).

The total cumulative cases during the epidemic are now 7,842 cases. These include:

A total of 5,797 people tested positive during the pandemic recovered.

Unfortunately, three new COVID-19 related deaths — the total number of deaths in BC — is now 223 deaths.

The new health care is not spreading. Second spread at Royal Arch Masonic Home A long-term care facility has been announced in Vancouver.

Also, the new community is not spreading.

According to a weekly report from the BC Center for Disease Control (BCCDC), the number of new cases rose to 833 this week (September 11 to 17) from 789 in the previous week’s (September 4 to 10).

The average age of cases continues to decline, this time from 55 to 38 years.

The BCCDC said that the number of new admissions in hospitals has increased over the past few weeks and now matches the levels in early May. However, despite the increasing number of ICU patients, it is still much lower than the Phase 1 levels.

Fraser Health reports more exposure incidents in schools in Surrey, along with eight incidents in Delta and Surrey Yesterday:

There are no new exposures to report Interior Health and Northern Health.

Vancouver has no COVID-19 exposures to report coastal health and island health.

One happened at the dress-option Ruins beach Sept. 7 between 1 and 8:30 p.m. The VCH said the incident was of low risk.

This is the second incident at Wreck Beach — the previous one Occurred On August 15th.

Meanwhile, an exposure incident occurred during operating hours from September 4 to 7 King’s Head Public House (1618 U Street) in Kitsilano.

Sobies reported that he was the last employee to work Thrifty foods (102–15745 Croydon Drive) tested positive in Surrey on 5 September.

BCCDC has added to its list two international aircraft certified with COVID-19.

The second is online Korean Airlines Flight 72 September 15 from Vancouver to Incheon, South Korea. The affected rows are 36 to 42 rows.

Anyone on these flights at these locations or on the specified dates should monitor themselves for symptoms up to 14 days after the date of visit or flight date. Anyone who develops symptoms should immediately isolate and call 811 for testing.

Fraser Health has announced the relocation of the Surrey test center to a new site that will allow the test to be expanded threefold.

The new center will have four drive-through lanes and walk-in testing stations. Tests are available for adults and children and teenagers aged 3 to 17 years.