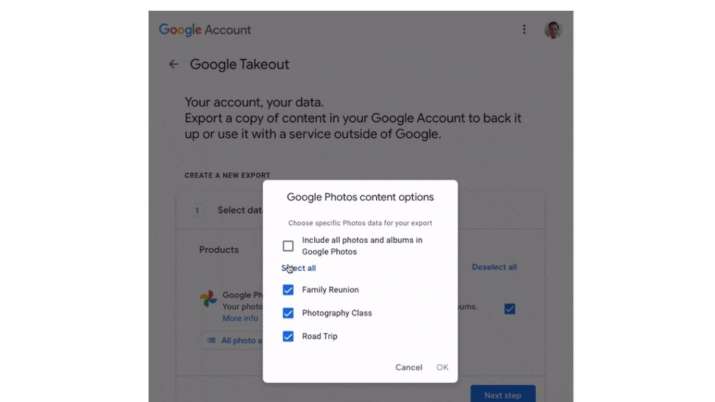 Google has given more control to people who use Takeout, its data portability tool, to export copies of their data from over 70 Google products, including Gmail, Drive and Photos. Now, users can transfer specific albums rather than the entire library. Google says it has already transferred millions of photos since it launched the feature.

People use takeouts for a variety of reasons: backing up their data, getting a bird ‘s eye on what’s in their account, or moving their data to a different service without first downloading it on the device.

“We first supported the direct transfer of data archives in 2016, and have since launched a scheduled export service, as well as the ability to transfer photos directly from Google Photos to Flickr and Microsoft OneDrive,” co-founder Greg Fair transferred project, in a blog post on Monday.

Google and the Data Transfer Project recently submitted comments to the US Federal Trade Commission (FTC) about data portability. Today, there are an average of over two million exports per month from Takeout, with over 200 billion files exported in 2019.

“The principles on which the takeout is based also apply to the Data Transfer Project (DTP), an industry-wide initiative that we founded and went ahead with Microsoft, Twitter, Facebook and Apple,” Google said.

Takeout is an open source data portability platform that allows people to move their data directly from one service provider to another. This allows people to test a new service, such as a mobile device, in areas where high-speed broadband is inaccessible, or to move data slowly or if there are meter connections.

“With the announcement of Microsoft OneDrive as a destination and photo album selection feature earlier this year, we continue our commitment to make portability more practical and widely available,” Google said.