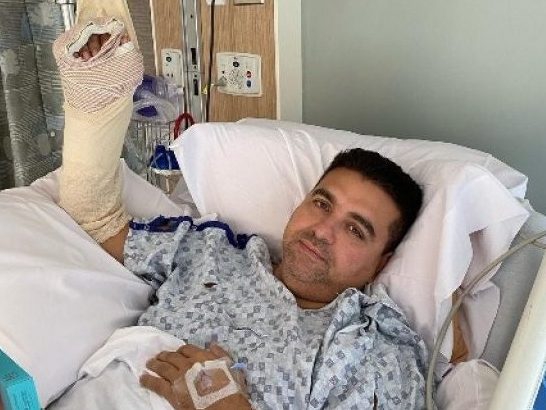 Famous food network star Buddy Valastro, 43, known as The Cake Boss, took to his personal Twitter account, reporting that he recently suffered a fatal injury to his right hand – his dominant working arm. At his home.

The reality TV star – who personally shared his news on his Instagram account udbuddyvalastro – posted a photo of himself lying in a hospital bed hanging from a sling with his battered and heavily tied hand under the headline: A fatal accident a few days ago. ”

As reported on www.people.com, a Valastro spokesman told the public that the accident happened while the chef was spending ‘quality time’ at home with his family, which included a bowling alley.

“There was an error with the bowling pinsetter, which was a common solution in the past, but it turned out to be a terrible accident,” they said.

TMZ reported that the famous cake master tried to release the bowling pin from the mechanism, but his hand was placed on the unit and shortened. Unable to remove his hand from his spokesman, Valastro was able to slowly see a thin, metal rod, but struck his hand several times “between his middle finger and ring finger.”
TMZ reported that his two sons, Buddy Jr., and Marco “ran to the garage to look at each other to cut the metal rod” and finally released his hand. He was later rushed to a hospital where he underwent surgery first to stabilize his arm, followed by a second surgery by a renowned Manhattan-based orthopedic surgeon.

Always hilarious, there is a line to the picture he posted… “What do you think about my new supplement?” And gave him a short video explaining what had happened. He has since been discharged from the hospital and is recovering at home.

Representatives of the iconic food star who lifted cake decoration into an art form told Entertainment Weekly (https://ew.com) “It will be an uphill battle as it is Buddy’s dominant right hand and he needs long-term restoration and treatment. The site reports that many fellow chefs have responded to the Valastro post and sent greetings, including to Emery Lagasse, Cat Cora and Duff Goldman, who co-starred with Valastro in the baking show Buddy vs. Duff.