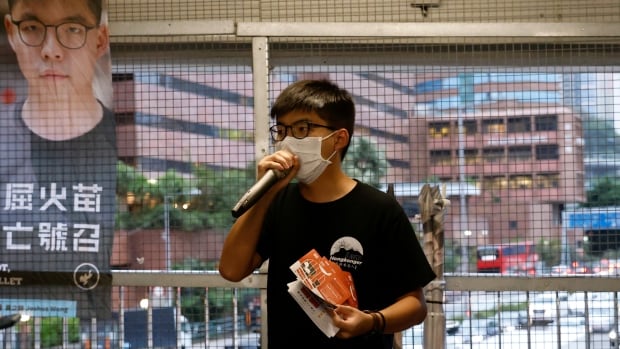 Leading democracy activist Joshua Wang was arrested by Hong Kong police on Thursday for participating in an unofficial assembly in October 2019 and violating the city’s anti-mask law, he posted on his official Twitter account.

Wang’s latest arrest adds to a number of illegal assembly allegations related to last year’s pro – democracy protests or suspicious crimes he and other activists face, prompting Beijing to impose a national security law on June 30.

Hong Kong police confirmed on Thursday that they had arrested two men, aged 23 and 74, for illegal assembly on October 5, 2019.

#BREAKING Joshua was arrested while reporting to Central Police Station at 1pm today. The arrest relates to his involvement in an unauthorized assembly on October 5 last year. He is also said to have violated the Anti-Mask Act.

Wong, 23, was arrested six weeks after media tycoon Jimmy Line was arrested on suspicion of colluding with foreign powers.

Wong is a frequent visitor to Washington, where he appealed to the US Congress to support Hong Kong’s democratic movement and counter Beijing’s grip on the World Economic Center. His visits have angered Beijing, which he says is the “black arm” of foreign powers.

In June, Wang dissolved his pro-democracy group Democrats, just hours after the Chinese parliament passed a national security law for Hong Kong, bypassing the city’s local legislature, a move that has been sharply criticized by Western governments.

Among the 10 policemen arrested in August on suspicion of violating the new law were his longtime colleague Agnes Chow and two other activists.

The new law considers China to live up to repression, secession, terrorism and conspiracy with foreign powers, up to prison life.

Following his latest arrest, activist Joshua Wang called on the world to focus on another 12 Hong Kong residents detained in China for trying to flee to Taiwan by boat last month. 0:56

Wangzhou was just 17 years old when the 2014 student-led umbrella movement turned up in the face of democratic protests, but he was not a prominent figure in the violent unrest that rocked the semi-autonomous former British colony last year.

The Anti-Mask Act was introduced last year to help police identify protesters suspected of committing crimes and is facing a challenge in court. Meanwhile, the Hong Kong government has made face masks mandatory in most situations due to the coronavirus epidemic.