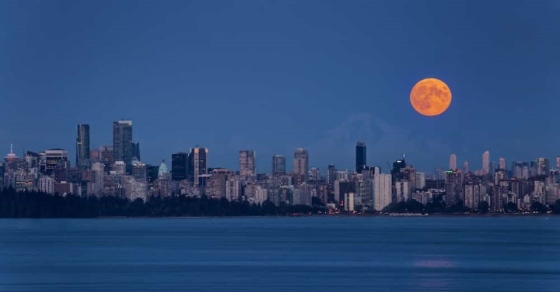 With the weekend forecast calling for rain, the Vancouver skies are expected to clear next week, just in time for a spectacular full harvest moon.

Earlier this month, locals were treated to a corn moon. Last year, the September full moon was the full ‘harvest moon’, which happens in two out of three years. However, since the October full moon is close to the fall equinox this year, it will have a crop title.

According to Old Farmers Calendar, “This full moon name is attributed to Native Americans because it marks the time when corn should be harvested.”

Harvest Moon gets its name because farmers need silver light to harvest crops. It has since inspired a dreamy, beautiful song by Canadian icon Neil Young.

The Old Farmers Calendar also states that local people give each full moon unique names to mark the change of seasons. As such, many of these names came about when Native Americans first interacted with the colonists.

The October full moon will be in Vancouver at 2:05 pm on Thursday, October 1st

Stargazers should choose to travel away from city lights as much as possible to avoid light pollution that obscures the clarity of heavenly bodies. While it works best in more remote locations, it offers more ideal viewing conditions anywhere at higher altitudes.

Read more from Vancouver is awesome

Report a typo or error