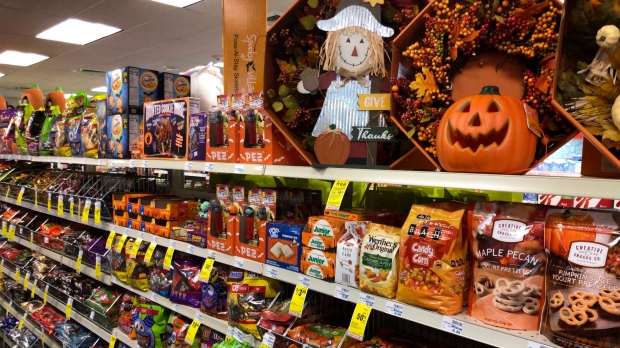 OTTAWA – Canadians are divided over whether the COVID-19 pandemic will disrupt their plans for the upcoming holidays and seasonal events, a new poll suggests.

According to a poll conducted by Leger and the Association for Canadian Studies, public health officials are appealing to Canadians in areas where COVID-19 cases are on the rise and where there are increasing cases counts to avoid contact with anyone outside of their health families or at least stick. Small social groups.

Results indicate that the message is only partially available.

Defendants with children who went home for Halloween last year had a close split over whether to do the trick-or-treat again this year, with 52 percent saying they would not do it and 48 percent said they would.

However, the poll found sharp regional variations. Two-thirds of respondents in Atlantic Canada, relatively unaffected by the resurgence of COVID-19, said they would let their children go out. In severely damaged Ontario and Quebec, two-thirds said they were not.

Children who go to trick-or-treating get thinner, with 49 per cent of respondents across the country saying they will not open their doors this year to give away sweets.

Again, Atlantic Canadians are likely to say they give dinners; In Ontario and Quebec, trick-or-treaters seem to be set for fewer picks. In Ontario, 24 percent of respondents said they would give dinners themselves. Only 13 percent in Quebec.

Defendants were divided about celebrating Thanksgiving this coming weekend, with 40 percent of respondents saying the pandemic was causing them to change their plans – and an equal percentage said it was not. Another 20 percent said they would usually celebrate Thanksgiving at any event.

Those who wanted to change their plans were asked how to explain. They were allowed to give multiple answers.

An online poll of 1,523 adult Canadians was held from October 2 to 4. It does not assign a margin of error as Internet-based polls are not considered random samples.

Nearly a third of respondents – 72 percent – said Canada had already entered the second wave of the pandemic, up 10 points from last week.

There is little division over how governments should respond to the second wave of the deadly coronavirus that causes COVID-19.

Fifty-three percent said they would close high-risk businesses and operations, while others said they should stay open for now. Another 28 percent said they want to keep as many businesses open as possible while watching how the second wave progresses, with 14 percent favoring a total lockdown as imposed last spring.

Sixty-seven percent of places of worship, 61 percent of inter-provincial travel, 52 percent of schools and universities, 52 percent of long-term or personal care homes, 47 percent of parks and playgrounds, and 46 percent of restaurants will be closed. And offices, 44 percent shopping malls and 33 percent retail stores.

This report of the Canadian Press was first published on October 6, 2020.